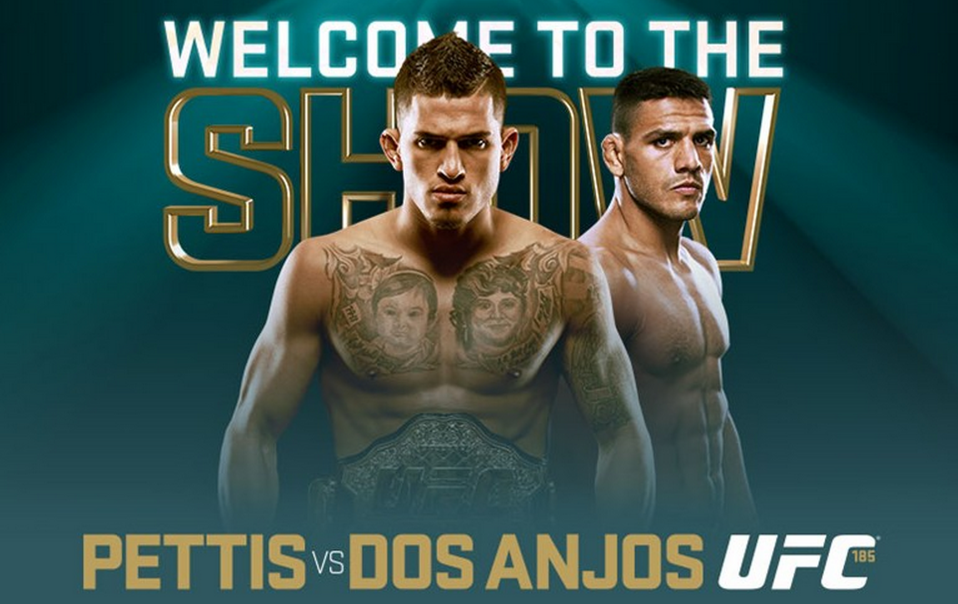 Just two weeks after their last show, the UFC is back with UFC 185.

The company is hot right now with huge buyrates for their first three shows of the year. We thought the last show wasn’t going to do nearly as well as it did. Will this show be the same? On paper, it looks like a very solid card for the hardcore fan, but do casual fans care about Anthony Pettis like they do about Ronda Rousey and Nick Diaz?

Alan: Roy Nelson by 1st round knockout
PRIDE is alive and well with the matchup that is Big Country vs. The Reem. This is a true battle of larger than life fighters who may not be best served in title contention. I have much more faith in Nelson taking a bomb from Overeem and surviving than I do in the Dutchman being able to eat one of Roy’s best shots. On the ground, Nelson has the advantage too – particularly if he gets on top and can “put the moon on him” so to speak. This will be one of those fights where you’re super excited as the face off and the bell rings but if it doesn’t end in the first two minutes, you start to get scared that you’ve got a stinker or your hands. I think we’ll get the more preferable short, impactful fight.

Duan: Johny Hendricks by decision
I think Matt Brown’s story is to be that of the nearly man in the UFC welterweight division. He’s a great guy, he’s as tough as nails and he works and fights harder than nearly everybody. His guts and dedication have taken him two or three levels above where he probably should have maxed out in the sport, but all fighters have their ceiling. For him, I believe the top contenders (and that’s only the very top contenders) are out of his reach. Hendricks remains one of those for now. While I don’t see Johny as the force he was during his great run from 2011 to 2013, I still feel he has enough to get the job done here. If this was twelve months ago I would have picked a Hendricks KO/TKO, but now I say he just about nicks it over three rounds.

Alex: Johny Hendricks by decision
UFC’s welterweight division has gone from a division where you had to outthink the chess master, to being a division where you have to be technically proficient in each area of the game, and be able to dig deep and drag your body over the finish line. George St Pierre defeated all of his opponents by being able to capitalize on their weaknesses and win rounds. Matt Brown, Johny Hendricks, and champion Robbie Lawler are all cut from the same cloth; they dig deep. This Saturday night, Johny Hendricks and Matt Brown will see who can physically muster all of the want in their body. The want to win and the want to be called champion will be what these two men will be fighting for and this fight brings them to that point. The winner will most likely get a fight with champion Robbie Lawler. I believe that John Hendricks will win this war. What a spectacle it will be.

Heidi: Carla Esparza by submission
Esparza has the wrestling advantage and I believe that will be the key to her keeping Jedrzejczyk from putting the title within her grasp. Jedrzejczyk was taken down 7 times by Claudia Gadelha in her last fight, though she defended 9 other attempts. For Jedrzejczyk to remain undefeated and become the champ, it will be imperative for her to defend the takedown. Unfortunately, I think Esparza will suffocate her with attempts and be able to finish the fight with a submission.

Jim: Anthony Pettis by decision
Anthony Pettis looked awesome in his comeback fight against Gilbert Melendez back in December and didn’t seem to have any issues with ring rust or his knee. Dos Anjos has also looked good in his last couple fights, stringing together a few wins and even earning a couple KOs instead of his usual decision victories. In this one I think Pettis is just too damn good for Dos Anjos to compete with. RDJ’s best bet would be to try to get Pettis off his feet and look for a submission, but I don’t see him having a ton of success there. I think Pettis keeps things on the feet, dictates pace, and cruises to a decisive decision victory.

GG: Anthony Pettis by 2nd round TKO
I think this fight is less about Dos Anjos and if he has what it takes to win the belt and it’s more about how good Anthony Pettis is. I wouldn’t put Pettis in Rousey’s or Bones Jones’ class, but he’s just a cut below. I think Pettis dictates the entire fight, has a solid first round to feel Dos Anjos out, and then unleashes a fury in the second to win decisively.