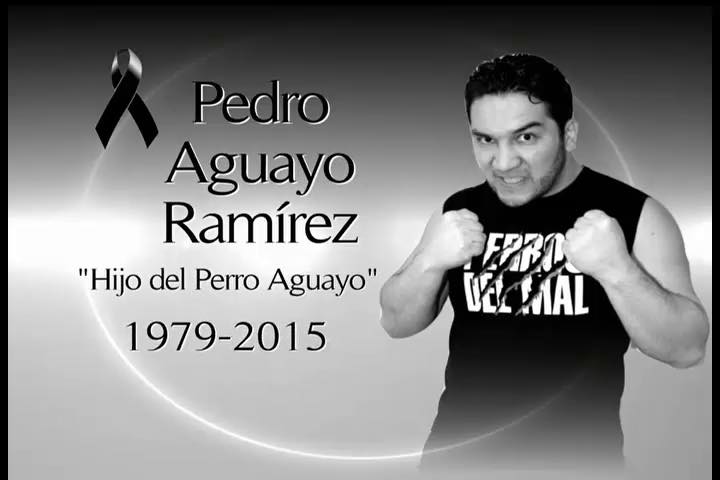 Our top five this week is dedicated to the life and memory of Perro Aguayo Jr.

Even though the death of Perro Aguayo Jr. is technically the biggest story of the week, I didn’t even want to rank it out of respect to everyone involved. It’s a sad situation all around and seemed to be the result of one of the freakiest accidents in all of wrestling history. I will not even link to the video here as anyone with a modicum of Google skills can find it as it’s all over the place.

Dave Meltzer will have the definitive bio on Aguayo Jr. soon and I’m sure he’ll have most, if not all of the facts that are out there.

The one thing I want to bring up is that the bowels of humankind are showing themselves and we know who you are. Anyone who has tried to get clicks off this story by leading people to believe that Rey was responsible for killing Aguayo Jr. in the ring should never be read again. Out of respect to Perro, please stop reading those sensationalistic blogs and websites.

Before we get to the rest of the news this week, I wanted to point out a few things that we’re doing on the website in case you haven’t seen.

John’s Bay Area wrestling company, Premier had their latest show on Friday night, which I live blogged from Del Mar High School. Since I had success doing a live report from the show, it looks like I should be able to do the same for Evolve, ROH, King Of Indies, and NXT (at least the parts that I will be able to see). You can also see some photos from the event.

Our own Cadillac Don got a sweet slo-mo video of Jeff Cobb’s impressive reverse power slam finisher (or whatever it’s called).

We’ve also kicked off our Top 30 WrestleMania matches of all-time list (30-26) and will have a new post every day this week.

Onto the news that didn’t quite make the top five…

– I don’t want to make this list such a downer, but we have to bring up two more wrestling-related deaths. Earlier in the week before Aguayo’s tragic accident, AAA lost long time employee Irma Osorno in a bus accident. Also, Samoa Joe’s trainer, Gregory Daves, also known as Cincinnati Red, passed away from a heart attack.

– Rey de Reyes was postponed because of weather and then again because of a building situation, but AAA finally did have their show.

– Grantland editor in chief Bill Simmons will be on the go-home Raw Monday and is doing some sort of weird angle with JBL.

I'm joining Raw's broadcast booth for a match or 2 on Monday. Wanted to be there for all 3 hours but JBL's massive ego wouldn't allow it.

– WWE announced an interesting addition to their 2015 Hall Of Fame class in Tatsumi Fujinami who will be inducted by Ric Flair.

Let’s get to the top five.

5. Kevin Owens is hurt/One NXT superstar will be on WrestleMania.

We’re doubling up on the NXT news here. Kevin Owens had knee surgery and will be out for a month or so, which means he won’t wrestle at the NXT show on the Friday before WrestleMania.

NXT is holding a tournament on Thursday at Axxess with the winner being added to the Andre The Giant Memorial battle royal. They’ve announced that at least Tyler Breeze, Hideo Itami, Adrian Neville, and Finn Balor are in it, but haven’t said if there are any others.

I’ve been telling Duan that I wanted to see that Balor entrance live at WrestleMania. Might I now get to see that?

Dan Rafael has the story.

Here are the most interesting tidbits:
– The show starts on July 11.
– The last FNF’s card will be May 22.
– It’s a two-year deal with 24 shows, most of them on Saturday, and a couple of them will be on Saturday on ABC.
– For hardcore fans, the non-TV bouts will air on ESPN3.
– Joe Tessitore and analyst Teddy Atlas will still call the shows.

3. Mayweather and Pacquiao don’t agree on the drug testing policy.

In what I think is simply gamesmanship by the Mayweather side, he didn’t agree to the 5 million dollar drug testing penalty. You’d wonder why he wouldn’t agree to it considering he’s done random drug testing for all his fights in recent memory, and you’re right, it doesn’t make sense (or cents).

If you watched Jim Lampley’s The Fight Game, you saw Pacquiao discuss all the Mayweather demands with Michelle Beadle. A-side this, B-side that. To me, that’s all it is. I think it’s Mayweather’s first opportunity to go back to being the villain and he took it.

“I have my feet up because I own this town. What are you going to do about it?” 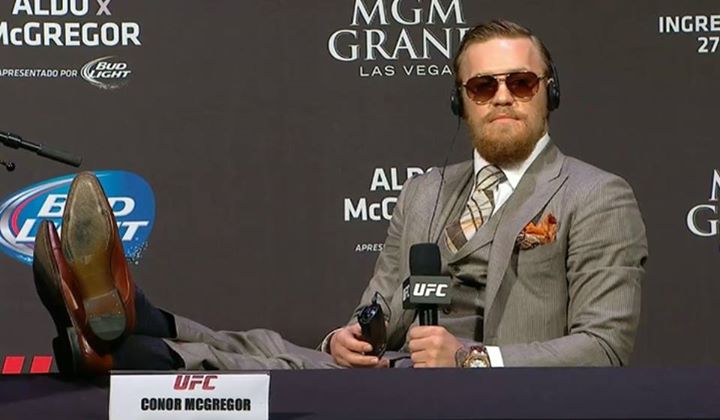 While they were in Rio for Fight Night, Dana White hosted a press conference to promote UFC 189 and UFC 190. Conor McGregor stole the show, playing full heel in front of Jose Aldo’s hometown crowd. The man gets it.

Dana White then brought out Ronda Rousey and Bethe Correia to promote them as the main event for UFC 190 which is also in Rio. Ronda was great, telling the crowd that Correia needs a, “Come to Jesus meeting,” and even taking a shot at Miesha Tate for looking at Instagram all night. She also gets it. One thing to note is that during the stare down, Correia held her own. She has her own bad-ass stare.

You can see the presser below.

The full card is set. It’s not a terribly strong “wrestling” event, though it does have some nice special attraction type matches. And there’s also the intrigue of what happens with Brock Lesnar who has still not re-signed with WWE and has that UFC carrot dangling.

Big D and I will do a full WrestleMania preview podcast mid-week.

The biggest news about the show late in the week was the Rock teasing that it’s possible that he may show up at WrestleMania 31. He hosts Saturday Night Main Event the night before (set your DVRs folks).

He continues to talk about the match with Brock Lesnar at WrestleMania 32, so if he does show up in Santa Clara, it could be to promote that. However, with Lesnar’s future in doubt, there’s another wrinkle. If Lesnar doesn’t re-sign before WrestleMania, do you put the kibosh on Rock showing up Sunday?

We’re going to have the single busiest week in the history of our website upcoming. We’ll have live coverage of Evolve, ROH, Hall of Fame, King Of Indies, NXT, WrestleMania 31, possibly the Raw after WrestleMania, recaps of Jim Ross’ Ringside Event and WaleMania, with a ton of audio coming from the weekend.