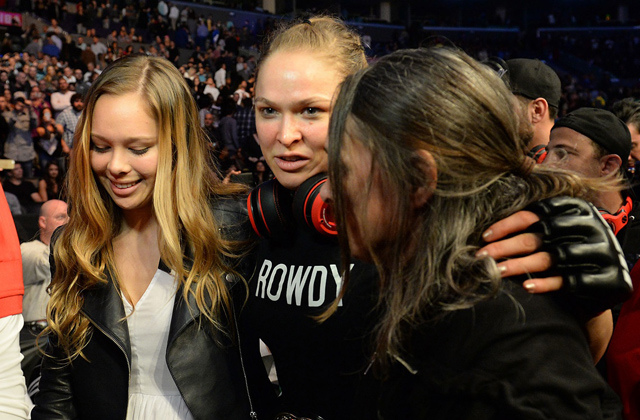 Ronda Rousey was at another level on Saturday night. Was it enough to eek out the number one spot in our top five?

Of course it was.

Before we get to the stories that just missed the top five, we should wish the WWE Network a happy first birthday. 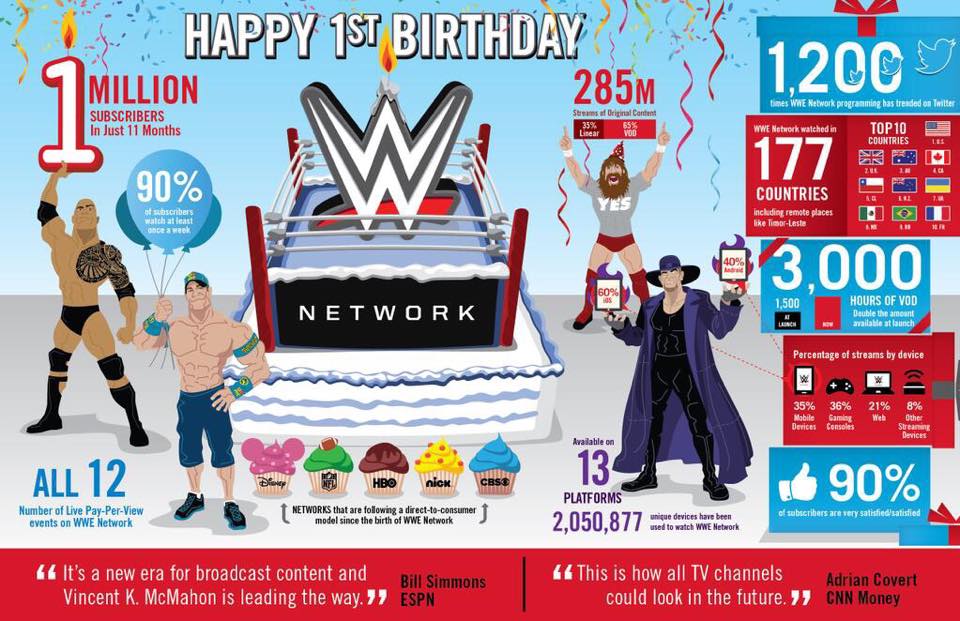 – Carl Frampton beat Chris Avalos to retain his strap just like Duan predicted. When is Duan ever wrong?

– Seth Rollins showed up on the Daily Show and it looks like Jon Stewart will return the favor and show up on Raw later tonight.

– ESPN did a short film on the Von Erichs. 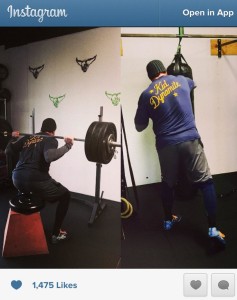 – Need more proof that the Undertaker is wrestling at WrestleMania 31? Just look to the right. The man is doing heavy squats!

– Ken Shamrock and Kimbo Slice will finally fight after their Elite XC fight was called off the day of. If I was Seth Petruzelli, I’d keep my cell phone on that day.

– Might the Karate Hottie jump to the UFC and go up in weight?

– The new Ultimate Fighter season starts on April 22 and features top fight teams the Blackzilians and American Top Team facing off against each other.

– Dave Meltzer and the Young Bucks united at the PWG show on Friday night. It’s too bad Meltzer wasn’t there to counter Shayna Baszler on Sunday night in their match against reDRagon. 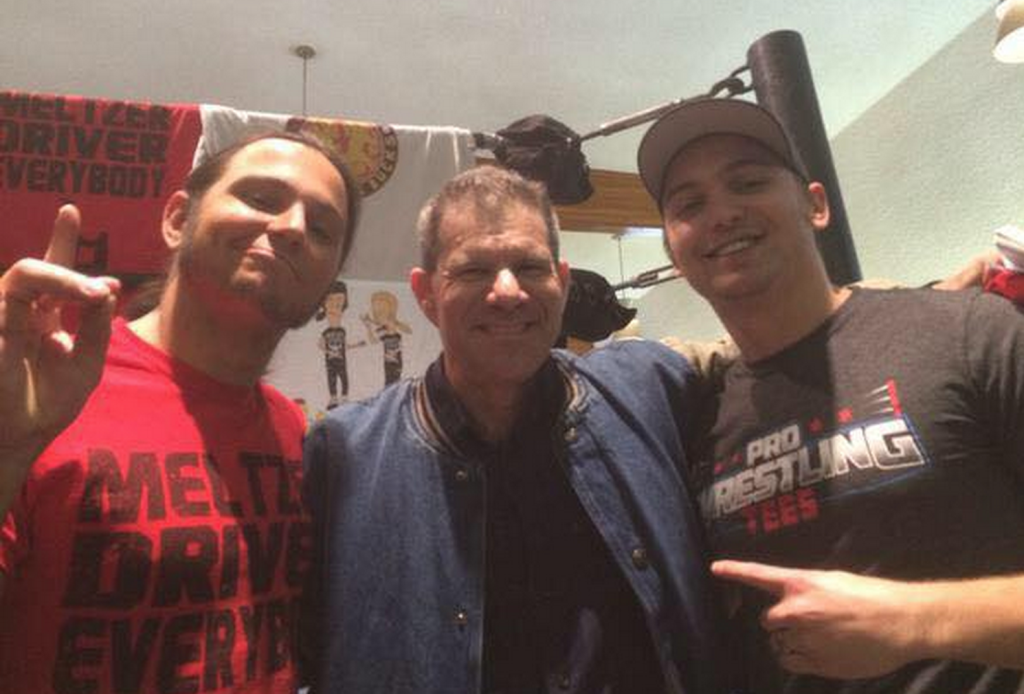 Now, onto the Top Five.

Jay Briscoe defended his title at ROH’s 13th Anniversary Show and after the match, Samoa Joe (who cut a promo before the match saying that he’s coming after the belt) came out, grabbed the belt, gave it to Briscoe, and shook his hand. They then went nose-to-nose.

The show was good in parts and overbooked in others, but featured quality wrestling for the most part. The crowd was dead in the last two matches though.

Anderson Silva is scheduled to claim that the reason he failed for PEDs is because he was taking them to help mend his broken leg.

After the WWE kept rolling over his contract, Rey Mysterio is finally free.

Per the Wrestling Observer:

Rey will also be doing a Q&A at an event WrestleMania weekend which Court Bauer and the MLW crew are affectionaly calling WaleMania. Why? Well, rapper Wale is doing a concert afterward. The show is at Taste Restaurant Night Club and you can buy tickets at The Ticket Group.

Rey is also going to make a whole lotta money on the indy scene for at least a few months.

2. Brock Lesnar is the prettiest girl at the dance. 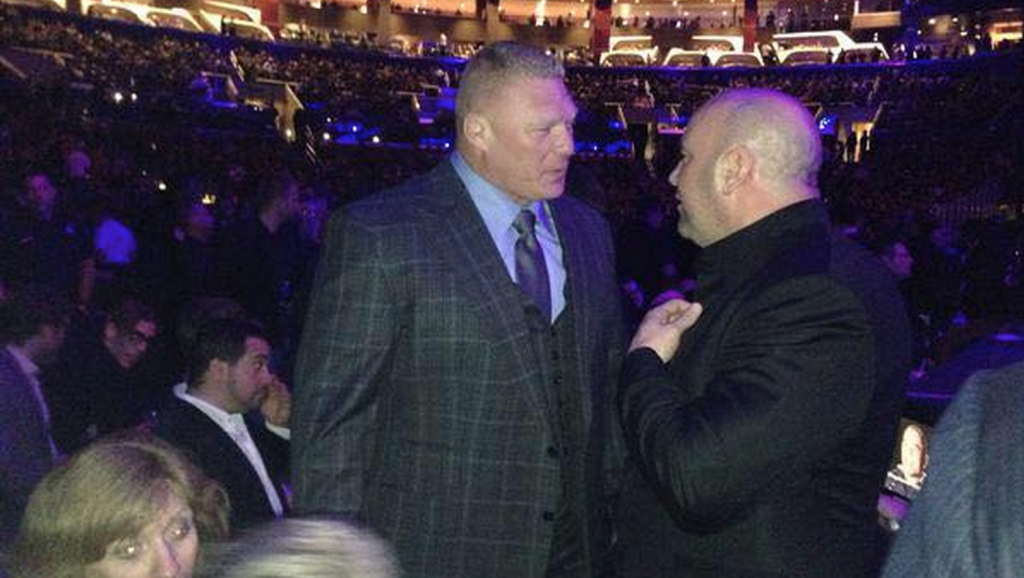 It seemed like Brock Lesnar was closer to signing with WWE than UFC these last few weeks, but then, Monday night happened.

Reportedly, Brock Lesnar and Vince McMahon had a disagreement about his new contract that caused him to walk out of Raw.

But, because Brock is now the smartest man in wrestling, he showed up at UFC 184 and made it very apparent with his large suit.

What’s next for Brock? Well, it now seems as if the UFC is back in the ballgame. Will he now make WWE’s life hell before WrestleMania? Is this all just a power play and he hopes to be back in WWE again?

You never know with Brock Lesnar.

1. Ronda Rousey is the queen.

She main evented UFC 184 against Cat Zingano, who prognosticators were saying was her toughest competitor yet and she beat her in 14 seconds. Celebrities wanted to hang out with her backstage after the fight including her co-star Vin Diesel, Jada Pinkett Smith (where was Jayden?), and Maria Schriver.

She then said that she was going to do a movie next (Athena Project?) and possibly fight later in the summer.

And the biggest fight out there for her is against a woman who currently weighs 40 pounds over the weight class.

Ronda Rousey has gone above and beyond the call of duty and is truly the UFC’s biggest star. What can’t she do? Oh yah, she can’t make Cyborg lose forty pounds.