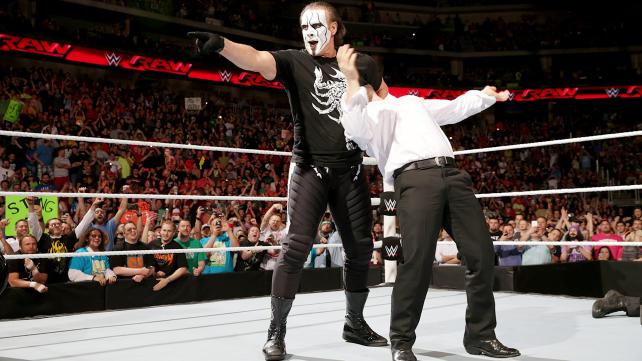 The Stinger was back on Raw to help Randy Orton fight off the Authority.

The show started in interesting fashion. With Seth Rollins, Big Show, Kane, and J&J in ring together, I was less than impressed, but the more that Rollins spoke, it seems that where they are going is that Rollins is looking to distance himself from Triple H and Stephanie.

Rollins blamed the Authority for allowing Randy Orton back into the group. If I remember correctly, it was Stephanie who wanted them all to work together. He brought up Orton turning on the group as a cowardice act while him turning on the Shield was a business decision. Kane, Show, and J&J had their mic time, backing up Rollins, though J&J seemed a bit hurt from last week.

Rollins says he accepts Orton’s challenge for a match at WrestleMania, but only if Orton accepts his challenge of going one-on-one in the main event. Orton showed up knowing that one-on-one would really be five-on-one.

Big Show and Kane were being interviewed by Renee Young and Kane says that Show will be in Rollins’ corner. This angers Show and they argue. Rollins butts in and angers them both and they say they won’t be in his corner now. So we’re at three-on-one?

In another backstage segment, J&J quit on Rollins after he slugged Jamie Noble for saying that The Future label is getting to his head. So now it’s only one-on-one?

In yet another backstage segment, Rollins questions Stephanie and Triple H. Rollins goes eye-to-eye with Triple H. Stephanie tells him to fix his problems.

In the main event, Orton is in the ring first. Rollins was on the stage and fooled Orton. He says it was all a ploy and the Authority came out united. Orton grabs a chair and all of a sudden Sting is in the ring. They clean house on the Authority to end the show.

Lesnar Vs Reigns heats up.

I’m not going to say that much about this. I’m going to embed two videos. In the first, Brock Lesnar (who was not there live) comes off as the badass that he is. He said that if he renews his contract, he’ll be the champ. And if he doesn’t, he’ll still be the champ.

In the second, Paul Heyman and Roman Reigns go toe-to-toe on the mic and work hard to get over the match.

Lesnar will be at Raw next week and Reigns can ask him questions in person then.

This was a new one. Rusev didn’t want the match and blamed Lana for accepting the match, which wasn’t what Stephanie McMahon decried. Lana wasn’t there. There was an interpreter instead. However, Rusev would accept the match if Cena allowed him to read his speech uninterrupted. That’s what a tough guy would do.

Before that, Cena became Corporal Kirshner and I’m surprised he didn’t make the fans do the pledge of allegiance. I’m not sure it’s the best usage of Cena’s abilities, but I expect them to have a darn good match at WrestleMania.

– AJ was distracted and lost to Nikki Bella.

– Ryback squashed the Miz and the Miz took it out on Mizdow.

– Cesaro and Tyson Kidd beat the New Day and then were jumped by the Matadors.

– Big Show beat up Erick Rowan before their match even started. Does that mean we get the mean Big Show for a couple of weeks again? Or will Stephanie put him in his place next week?

– Larry Zbyszko is the next inductee for the WWE Hall Of Fame and will be inducted by Bruno Sammartino. They aired a really fun video, focusing on the feud between the two.

– There was a weird build for the Andre The Giant Memorial Battle Royal with Kane, Mark Henry, and Curtis Axel.

– Daniel Bryan, Dean Ambrose, and Dolph Ziggler beat Bad News Barrett, Stardust, and Luke Harper when Ambrose pinned Barrett. It was a bit of a cluster, but they’re trying to build Bryan vs Ziggler as a feud. Barrett ended up with his title even though R-Truth, Stardust, Bryan, and Ziggler all had it.

This might be the worst build for WrestleMania in as long as I can remember. And please don’t say WrestleMania 27 because the Rock was around back then.

Since I’ll be there live, I’m sure it will be fine and probably better live than on TV. But I don’t see how they’re going to get more than the normal WrestleMania audience to check in this year.