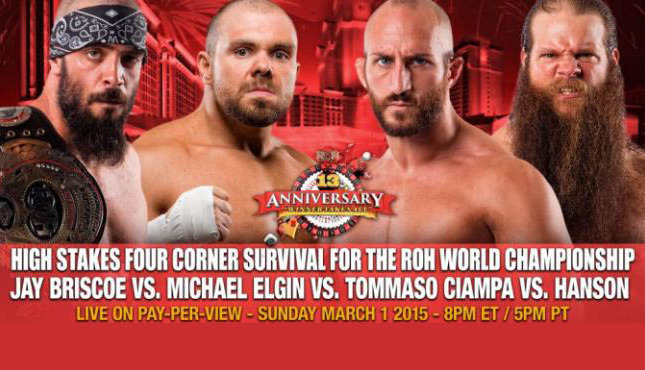 This is our first ever live play by play of an ROH show on this website.

We’re going to do another play by play for the ROH show during WrestleMania weekend, so we’re getting started one show early.

Really great action for the opener. The match was set up for you to believe that Alexander was going to get the duke in an upset. He countered a lot of Sydal’s moves before catching Sydal in a backbreaker using both his knees. He missed a running move in the corner, took a bump on his back which set up Sydal’s shooting star for the duke.

Moose did a standing dropkick with Briscoe sitting on the top rope. That was impressive.

There was some fun stuff, including Briscoe doing Cactus Jack’s elbow to the floor. But it was kept fairly short with Moose winning with the spear.

Doc Gallows couldn’t get to Las Vegas because of travel issues. So Karl Anderson goes at it alone.

The match was a bit of a cluster with all five guys in the ring at the same time a lot. It was hard to follow and in the end, the moves didn’t really mean anything until the end.

Both of the guys worked really hard. Really sold pro wrestling match. Whitmer kissed Strong on the lips and Strong fired up with punches and forearms before hitting his End of Heartache which is a suplex into a double knee backbreaker.

Mark Briscoe is with ODB.

Maria said that she was pregnant and she’d invite ODB and Briscoe to the baby shower to make it up to them. Bennett showed up and super kicked Briscoe and Kanellis hit ODB with Championship Of Love belt. She got a two count.

ODB is manhandling her throughout. She chopped her hard a couple times and Maria’s chest is red. Maria chopped ODB’s boob. Bennett tried super kicking ODB, but hit Maria instead. Maria kicked out of her own husband’s finisher.

This match is a non-title match. It was a slight level above from a work perspective compared to the previous matches so far. The story was that this was the biggest match of ACH’s career and he had to face the best wrestler going today in Styles.

ACH did a Fosbury Flop over the top rope and onto AJ, doing a full rotation in the air. It was ridiculous.

The vet was a step ahead of the rookie at the end. ACH went to the top and missed a 450. AJ hit the Bloody Sunday, put on the Calf Slicer, which got reversed into a cradle, but then AJ hit the Styles Clash for the win. 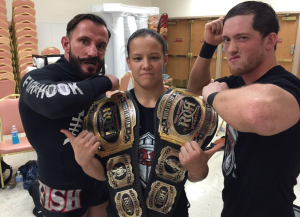 Shayna Baszler came out with ReDRagon holding the belts. She also got involved and got on the apron and the Bucks teased the superkick.

There was so much stuff going on that I can’t even really describe it. The Bucks went offensive with move after move after move. Nick Jackson jumped into a triangle that was sweet.

The Bucks hit Chasing The Dragon for a near fall. They hit the More Bang For Your Buck for the near finish, but Shayna pulled out the ref. They went after Shayna, but

Alberto was working faster than he did in WWE. He was trying to set up the cross armbreaker.

Lethal actually got in on Alberto but he pulled his arm out. Lethal clotheslined him over the top rope. Lethal did three topes on Alberto, busting up his mouth in the process. The third one sent him over the barricade into the front row of the crowd.

Truth Martini came in and Alberto put him in the cross armbreaker. Lethal jumped off the top rope, but Alberto caught him in the arm breaker. Lethal hit him with the book of truth, which broke up the submission and he got a two count. Lethal went for the Lethal Injection, but his arm was hurting too much to do the springboard.

Alberto was sent into the ropes and was hit with the book again and then Lethal hit the Lethal Injection for the win.

Samoa Joe came out to put over the four guys in the main event but said that they were on his radar because he’s going to be the next ROH world champ.

Hanson Vs Ciampa Vs Michael Elgin Vs Jay Briscoe

The crowd was pretty tired throughout and the match itself was overbooked. Jay Briscoe retained the title, but not in a very strong way.

Near the end of the match, Hanson spin kicked Briscoe onto Ciampa who was out. Elgin pulled Hanson out of the ring and Briscoe got the pin. Elgin tried to hit Briscoe with a chair shot, but Nigel McGuinness stopped him. He had to stop him again and Elgin went after McGuinness but Ciampa saved him.

There was also a run-in with three masked guys who they teased were The Kingdom.

After the match, Joe came out and grabbed the title. He then handed it to Briscoe and they shook hands and then went nose-to-nose while still in handshake.