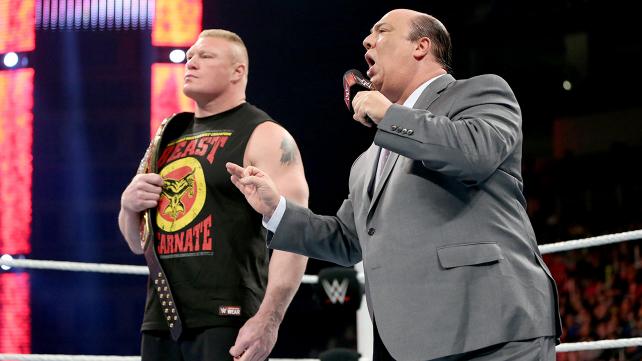 The lack of urgency from WWE as it comes to their biggest show of the year is alarming.

After Brock Lesnar left Raw two weeks ago in a huff about his contract, you would think they would get all of their use from him this week since he’s there. But you’d think wrong. Lesnar and Heyman showed up in the ring at the end of the first hour. It allowed Heyman to try and mix in some real life into his promo, referencing that Lesnar could unify the WWE and UFC heavyweight titles, mentioned Floyd Mayweather and Manny Pacquiao together still being smaller than Brock, and essentially saying that it’s no longer WWE’s belt. It’s Brock’s belt and no Montreal will happen.

It was a great attempt to help a cold program, but with Brock standing there smirking and Roman Reigns not doing anything and not even being on the show until the main event, I’m not sure Heyman can do everything necessary by simply talking.

The show-long storyline had to do with Randy Orton finally making the full turn and attacking Seth Rollins at the end of the show. And by attacking Rollins, I mean, he essentially destroyed him. The Authority probably needs to lay Orton out twice in order for people to get back into this thing. Because there seemed to be some finality to the beat down and we’re still three weeks away.

The show started with the Authority, sans Stephanie and Triple H, in the ring introducing Randy Orton. Seth Rollins is the only one who believes that Orton is still on his side and he was doing so in a way where you didn’t really believe as much as he hoped. Everyone else didn’t believe it and Jamie Noble even said it before being berated by Seth.

They introduced Orton down to ringside and he berated everyone, much like a sarcastic heel manager would. They were shocked, but then he said he was just joking and only Seth bought it, or tried to buy it.

Seth and Orton were scheduled to face Roman Reigns in the main event in a handicap match.

Even though, the reveal should’ve hyped up the crowd and been the real kickstart to the feud, it was just the opposite. The crowd was tired of waiting the extra few weeks for Orton to turn and didn’t buy it. And even worse yet, Orton did everything to Rollins that you would’ve wanted to see him do to Rollins at WrestleMania, so I’m not sure what’s left. The only thing that makes sense is that they gave Orton this much offense because he’s not winning at WrestleMania. But oh well.

John Cena gets his match at WrestleMania.

Much like I expected last week, the way John Cena was going to get his match with Rusev was to beat the yes out of him. However, I’m not sure that I thought they’d do it the way they did.

Just as Rusev was going to come out, Cena stopped him and preached to him about privilege and such, which rung hollow after what happened next.

Rusev destroyed Curtis Axel. For people thinking that they’re going to do anything with AxelMania, they won’t. They may give him a faux title win, but he’s going to mean nothing in the long run.

Rusev cut a promo ragging on Cena and Cena came out and destroyed him, putting him in the STFU. Rusev has never been beaten so badly. I don’t think they had to go this far in getting Rusev to take the match. I would’ve preferred trickery.

– Daniel Bryan beat Wade Barrett, which featured a true clusterfuck with the rest of the guys in the Intercontinental title chase. Why would anyone want this belt that badly watching Barrett lose time and time and again? Dean Ambrose beat Stardust and all the guys came out again and R-Truth ended up stealing the belt.

– Rowan and Ryback beat Kane and Big Show and Stephanie McMahon came out to berate Show and Kane. I thought Show was her giant?

– Wiz Khalifa came out with Wizdow who spit a battle rap at Miz who walked off in a huff. Wiz then did a mini-concert.

– A promo video for Triple H vs Sting played and Sting’s voice was manipulated to not sound like him at all. It was bad.

– The New Day beat Tyson Kidd and Cesaro. No champs ever win.

– Naomi pinned Natalya and then Los Matadores came out and beat the Usos.

– Bray Wyatt was doing short segments for an interview segment late in the show. It was a tease for the Undertaker which featured fire and a rocking chair, Taker’s voice, and an excited Wyatt.

Welp, we have the coldest number one contender in a long time and zero WrestleMania programs that seem hot. Doesn’t bode well for WrestleMania 31.