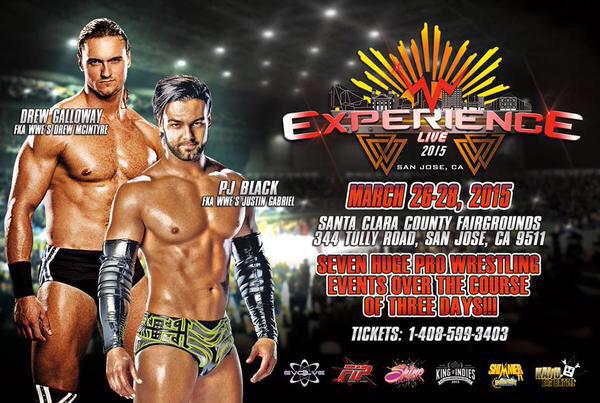 We have Evolve 40 live coverage coming from the Santa Clara Fairgrounds.

Drew Galloway comes out first and makes a joke about starting the show with an interview. The non-title match starts the show.

Galloway has about 4 inches on him in height. Galloway’s presence is tremendous. He’s less puffy in his build and looks much more like an athlete should.

Both guys are extremely agile. Uhaa hit a vertical jumping enziguri as Galloway came toward him out of the corner. Galloway hit him with a flat drop kick for a two count.

He suplexed him toward the corner but Uhaa missed the turnbuckle. Looked like he caught the ropes with his head. 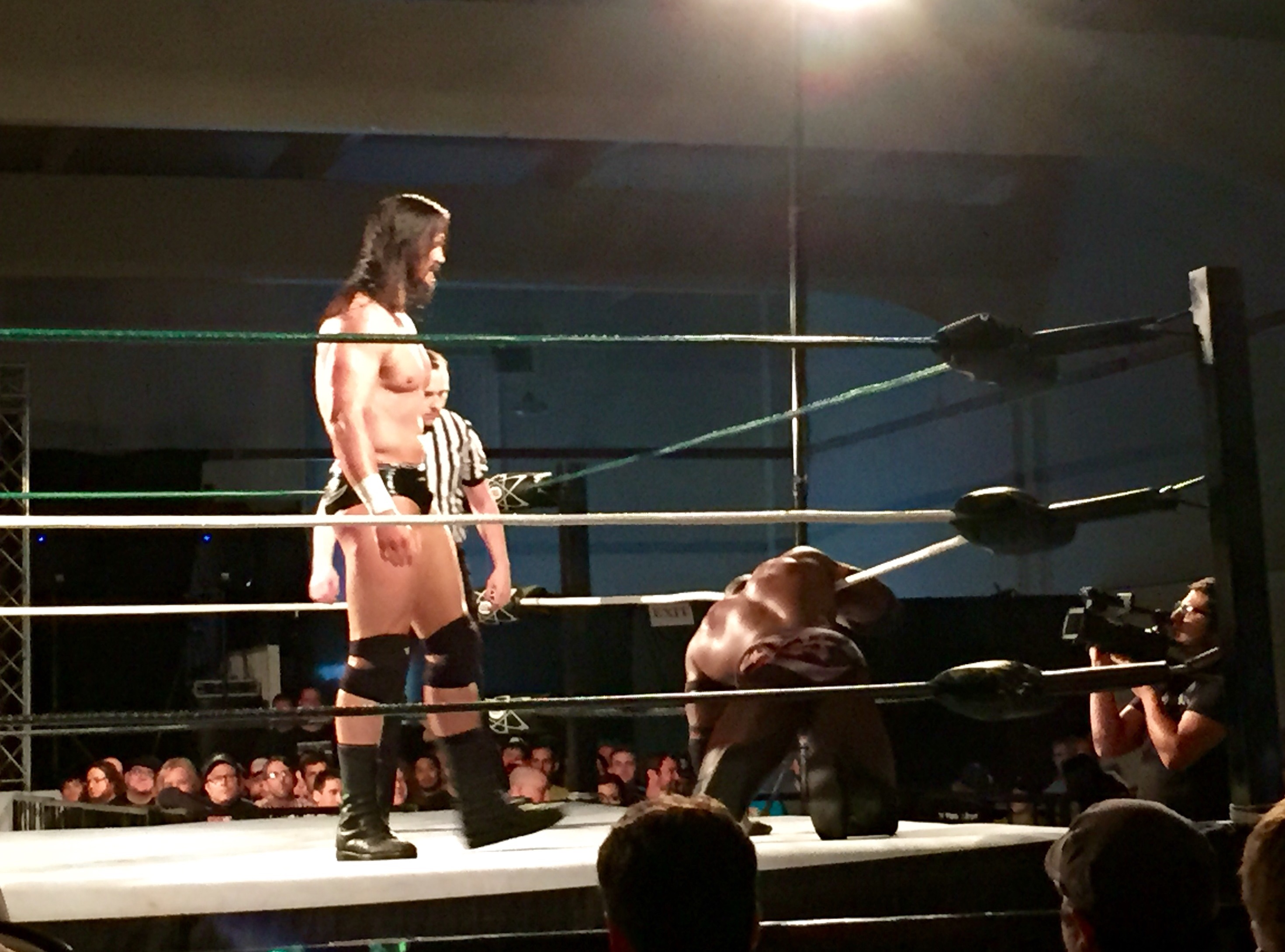 Drew put over Uhaa, the talent roster, Evovle, and his match tomorrow. He’s excellent on the mic.

Chris Hero is in End’s corner. Alan4L who I’m watching this show with, says End is a high level striker so this will be striker vs grappler.

Lots of grappling early on and the crowd is definitely for the Northern Californian Thatcher. Thatcher is doing anything he can to stay away from leg kicks.

End finally got Thatcher with a big kick to the chest. Thatcher got away from his game for a second and ate a reverse kick the face and was almost out. He got up at 8. Outside the ring, Thatcher went for a running knee from the apron, but End swept his leg and he took a face first bump on the end of the apron.

End hit Thatcher with a German bridged for the pin and Thatcher kicked out and turned it into a kimura. After reversals, Thatcher sunk in a Fujiwara arm bar for the victory.

Perkins wins flashiest ring gear of the night so far.

Lots of counter wrestling so far. They started doing more of a submission style soon thereafter. Gulak caught Perkins’ left leg on the ropes early on and has been working it for most of the match.

There were some excellent transition with arm bars traded. Perkins is going for the arm bar while Gulak is working the ankle lock. Gulak finally won with it.

Fox took a tremendously high back drop and also a double underhook into a back breaker on the outside.

The level of work rate is a bit lower between these guys. Fox is a super flyer and did a sweet swan flip dive over the top rope.

He also did a very graceful version of a swanton for a two count. Fox hit a springboard code breaker for a sweet two count. Page grabbed Fox from the top and did an RKO of sorts with Fox’s face hitting the apron. Fox won after hitting the Lomain Pain and a 450 splash off the top rope.

Page told the crowd they should boo him since he lost last night and today. He basically apologized to his hero, Johnny Gargano.

Gargano came out and told Page to hold his chin up. And then he hyped up his title for title match with Drew Galloway tomorrow night.

There was a chop fest to start the match. 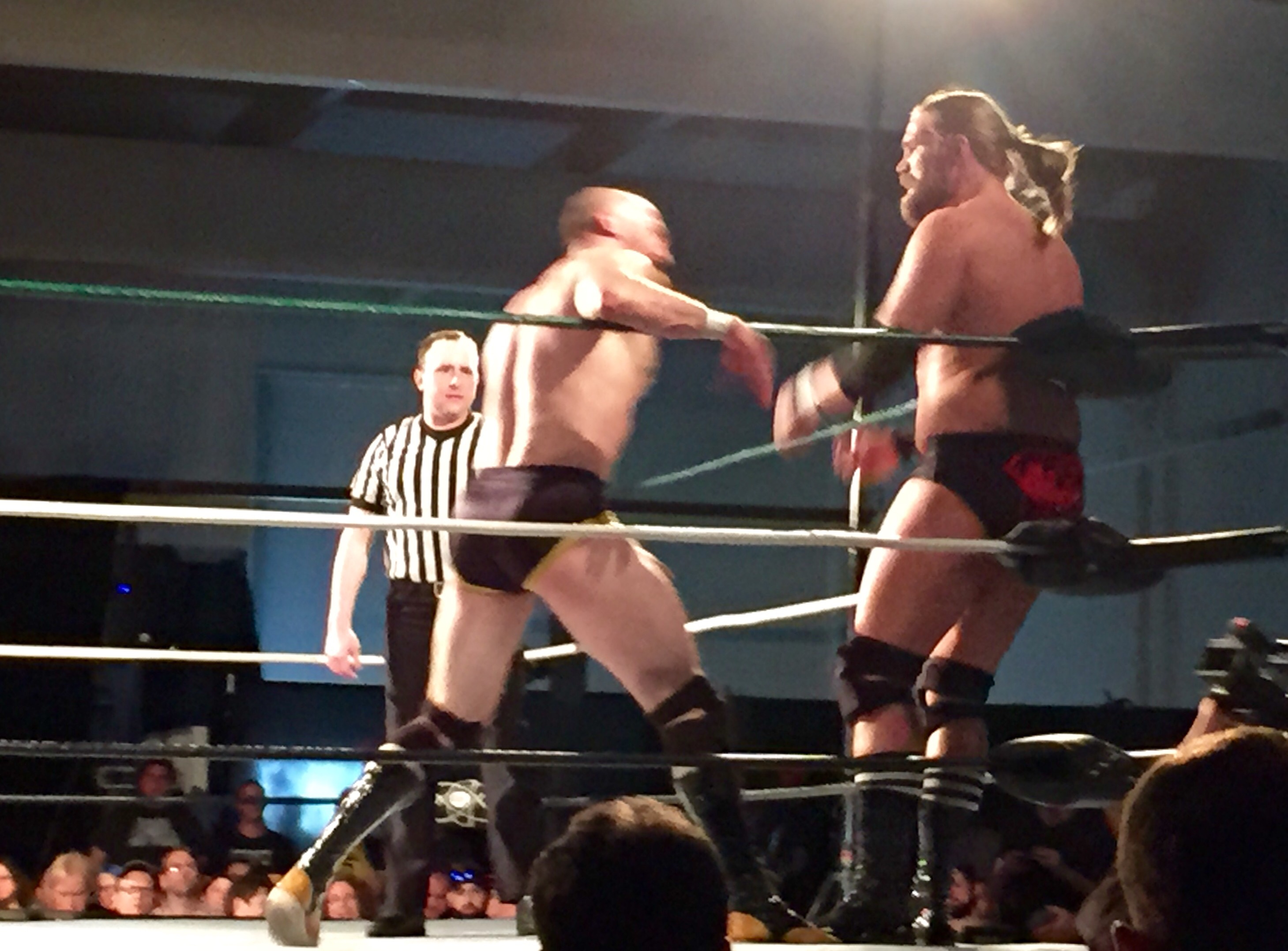 This was a really good change of pace match. Hero wrestles at a more patient pace than everyone else on this show. Busick did four running Euro uppercuts to Hero on the outside.

This is my first time seeing Cage up close and he’s a beast. Swann performed Lionel Richie’s “All Night Long” during his entrance; his entire entrance.

Swann came off the top with a dive and Cage caught him in suplex form and then suplexed him. That was nuts.

So Cal Val is with Cage and her bodyguard Andrea was putting the boots to Gargano on the outside but Gagano sent her face first to the steel post.

Cage hit a delayed suplex from the second rope on Gargano. At some point, Swann hurt himself and was outside for a long time.

Gargano put the GargaNO Escape on Konley and the referee called the match. Konley looked to tap out, but the ref called the match because of Swann on the outside. It was a confusing finish.

Ricochet said that Swann hurt his ribs and for the crowd to not be down. He also put Black’s sweet trunks over.

Wale is in the house.

I have seen it all; the People’s moosault.

Both guys are flying all over the place. Ricochet had a sick dive over the top in which he rotated under.

They traded kicks. Ricochet threw a reverse kick and Black answered with a super kick.

Ricochet did a reverse frankensteiner off the top rope. 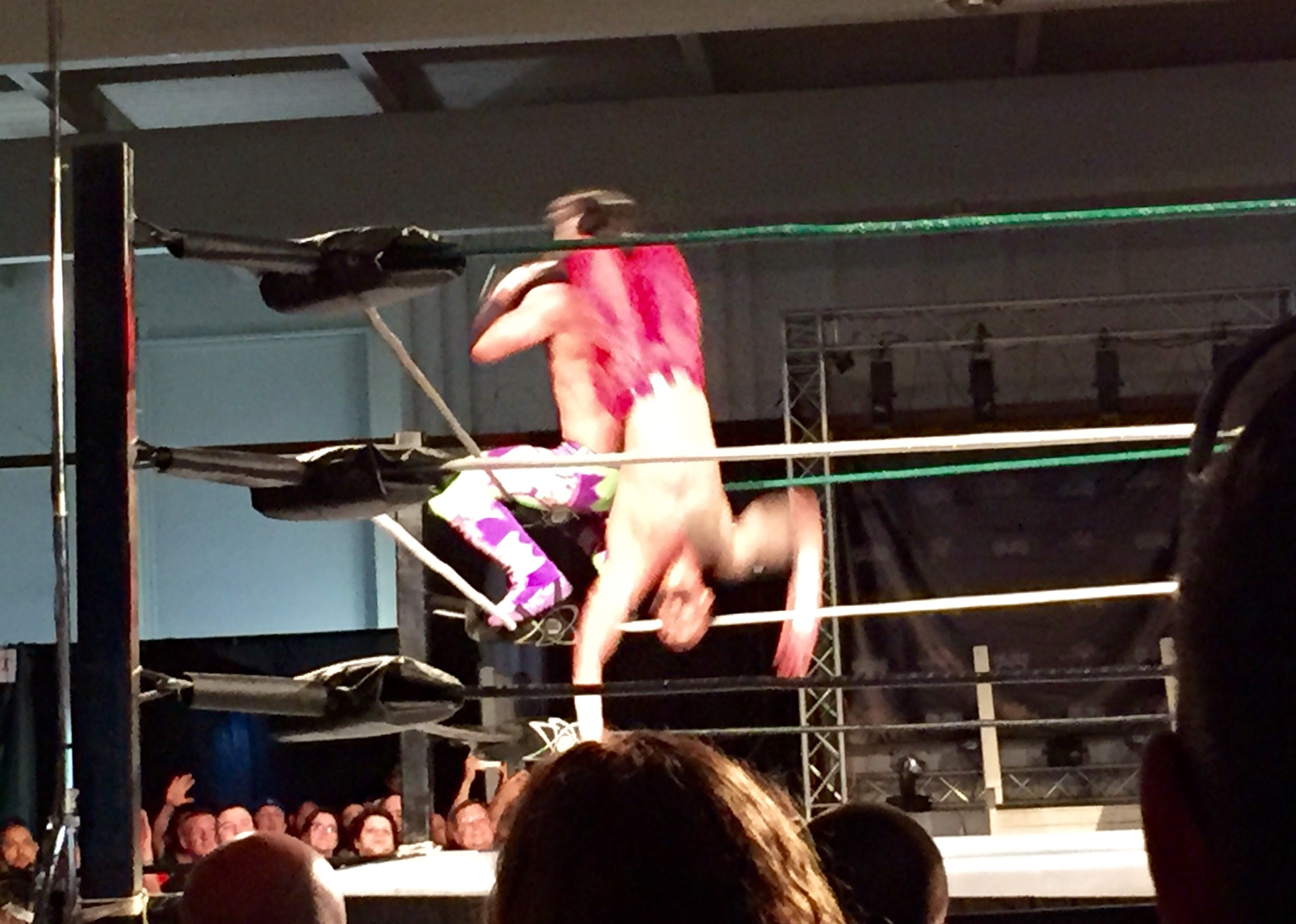 Ricochet won the match with whatever the next half revolution is after a 450 and hit him like a swanton. Sheesh.