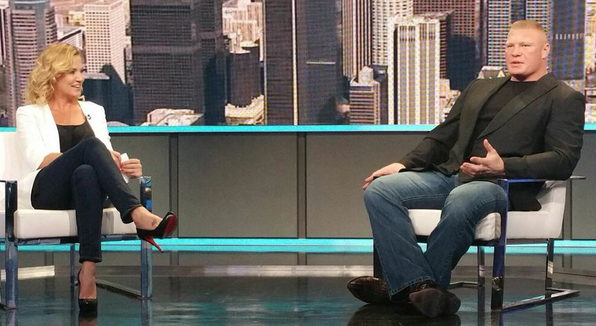 Brock Lesnar says his MMA career is over.

Lesnar was on SportsCenter earlier today with Michelle Beadle.

I'm sitting down with Brock Lesnar at 6:45 est on @SportsCenter with an exclusive interview. Should be something!!

So you don’t say Michelle?

Beadle was shown on TV in the crowd at last night’s Raw and today, she was live in the ESPN LA studios talking to Brock Lesnar.

Lesnar announced that his MMA career was over and that he re-upped with WWE last night.

I’m here to say my legacy in the octagon is over. I re-signed last night with WWE.

He went on to say that it was a hard decision and that he was actually training for a return to the cage (like most everyone thought when he started to look leaner) for the last couple months. He said that he didn’t make his mind up until last night when WWE made him an offer that he couldn’t refuse.

He also said that when he was in LA for UFC 184, he wasn’t there for bargaining reasons. He was there for the experience.

He did admit to not liking the way his MMA career ended and that being one of the reasons why he thought about going back.