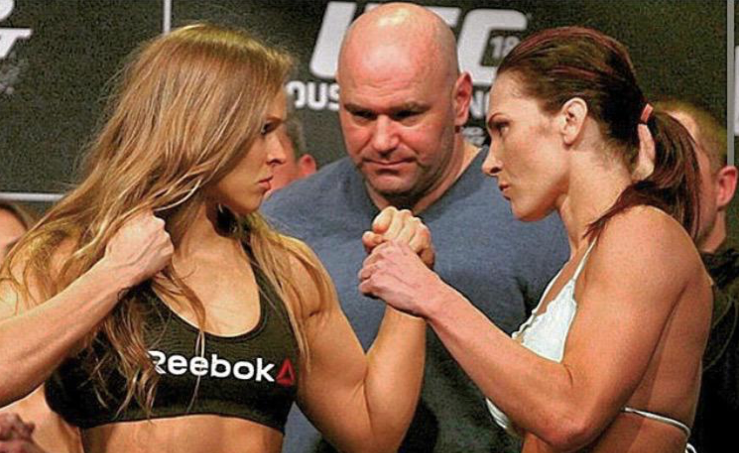 Can the UFC keep up their hot streak?

This show was a lot more attractive before injuries ravaged two out of the top three fights. As it is now, it’s really the main event and not a whole lot of intrigue after that. Some will be interested to see how Holly Holm can do against someone who may not just stand with her the entire fight.

But still, it’s a Ronda Rousey fight and we only get two of them per year.

Duan: Ronda Rousey by 1st round submission
It is impossible to pick against Rousey right now and have it be an informed decision. She has been operating on such a different level to everybody else in the division that you just can’t benchmark other fighters against her. There is no opponent out there that can be ready for what she brings to the table and until she starts showing signs that her own performances are slipping, you can never bet against her.

Cat Zingano is an undefeated fighter. She’s fared well so far in her UFC run and she definitely has a lot of ability. Her jiu jitsu is strong and she has good wrestling skills, but look, Alexis Davis had a great ground game and Sara McMann was a tremendous wrestler. Rousey took less than a round to finish off the two of them combined. Whatever threat Zingano poses, it won’t be anything new to Ronda.

Alan: Ronda Rousey by 1st round submission
Cat’s display of heart in her last fight was one of the most impressive things we’ve seen in a while, but she will need all that heart and then some to have a prayer against the unstoppable champion. Ronda just looks more and more terrifying with every outing. Zingano winning would be a lovely story but I just can’t see it.

John: Ronda Rousey by 3rd round submission
Cat Zingano is Ronda’s toughest test to date, but the result will be the same; Ronda by armbar. In Cat’s last fight at UFC 178, she weathered the storm from Amanda Nunes to come back and win. There is no quit in Cat and she will put up a great fight. This fight will be won and lost on endurance. Cat will push Ronda more than anyone in the past and the fight will go into the third round. Ronda will finally capitalize on a fatigued Cat and win by an armbar.

Heidi: Roundy Rousey, late
Two years ago, I said Cat Zingano would be the person who could beat Ronda Rousey. However, that was at a time where Ronda hadn’t developed her striking to what it is now. I really think Cat can challenge Ronda in ways others haven’t. I think she can drag her into deep waters and possibly even into the championship rounds. In the end though, I see Rousey retaining her title. However, I don’t believe this will an easy, first round finish for Rousey.

Alex: Ronda Rousey by 1st round submission
Cat Zingano is a really good fighter. He best victory is her last victory which was against former Strikeforce BantamWeight Champion Miesha Tate. Ronda Rousey is a once in a lifetime competitor. I think if you challenged her to any game she would try to the death to beat you. This ability gives Ronda the advantage, especially in the early rounds where Cat struggles. I think Ronda makes Cat look average in this matchup. Ronda’s striking and grappling is leagues above Cat’s. Miesha looked good against Ronda twice. Miesha hated Ronda and didn’t want to lose. She wanted to prove a point. Cat has had adversity in her life; a lot of it recently. Does she want to beat Ronda, embarrass her? We’ll see, I think Ronda walks out with another first round victory.

Jim: Ronda Rousey by 2nd round submission
This is MMA and we have seen that anyone can be beaten on any given day. All it takes is losing focus for one second and that big punch lands squarely or that submission presents itself to your opponent. We saw Liz Carmouche nearly snap Ronda’s unbeaten streak with a rear naked choke, but that was the last time we ever saw Ronda in any real trouble. I think anyone’s best bet with Rousey is taking her into the later rounds and seeing if she loses some of that focus and maybe gets sloppy when pushed beyond where she has ever been in true competition. Zingano is probably Rousey’s toughest opponent to date, but I don’t think that really matters here. I don’t think she will be able to drag Ronda into deep waters and find an opportunity to land that big shot. I will say I think she goes longer than any of Ronda’s previous opponents (except Miesha), but I still think we see a Rousey finish by submission sometime in the 2nd round.

GG: Ronda Rousey by 1st round submission
I think Zingano’s emotions will get the best of her. I’m worried about how she’ll react emotionally to the biggest fight of her life. In order to beat Rousey, she’s going to have to be 100% focused at the task at hand. And I don’t think she will be. And who can blame her? She’s been through so much. This fight is a good year too early for Zingano.