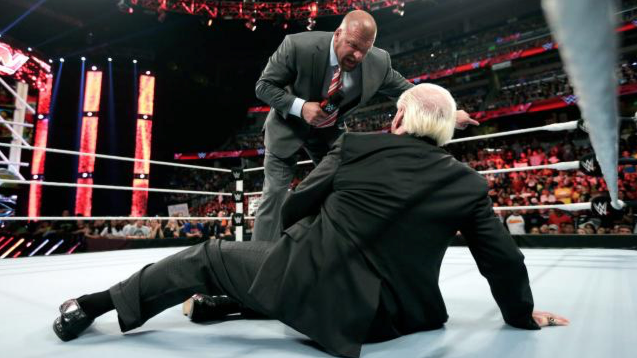 How was the go-home Raw before Fast Lane?

Many people online really liked the show and while I wouldn’t necessarily say it was a bad show, it was merely slightly better than average to me. But it doesn’t mean there weren’t good things on the show.

Ric Flair and Dusty Rhodes were both on Raw tonight, though Flair’s role was in a feature spot while Dusty’s wasn’t.

Triple H came out at the top of the final hour to talk about Sting and mentioned how ludicrous it was for people to think that he was scared of Sting. Well, when he fell on his butt in the middle of the ring last week, that was quite proof enough.

Flair came out and Triple H told him to save all the stuff about Sting because he didn’t want to hear it. He had respect for Sting as the last man in WCW to not jump ship. Flair wanted to make sure Triple H was going to be active and not to think that he could just take off his suit and beat Sting. Wait, when’s the last time Sting wrestled?

He told Triple H that when people ask him who is the greatest wrestler, he says Triple H, but only when he’s active. He said he thought Triple H would beat Daniel Bryan in five minutes last year at WrestleMania 30. (That’s what you get Bryan for not drinking with Ric.) Triple H said he’ll never be Ric Flair, but Ric will never be Triple H when it comes to kicking Sting’s ass. How would he know? He loves WWE third only to his wife and kids and won’t let Sting make a fool of him. And then he pushed Flair for good measure.

It was an interesting segment in that he keeps harkening back to WCW as if Sting is trying to ruin WWE for beating WCW and then buying them. But wouldn’t that make Sting the heel? Maybe I’m looking into this too much.

Roman Reigns and Daniel Bryan don’t get along.

The show-long storyline played off Bryan and Reigns winning the gauntlet on Smackdown.

Byron Saxton did an interview with Reigns in the lockerroom. It was better written than most Reigns interviews, but Reigns’ delivery was still fairly bland. But I think Saxton did a good job at leading Reigns through the story. It made Reigns a conflicted babyface. He was respectful of Bryan, but also bothered that Bryan didn’t take his Royal Rumble loss like a man and accepted his chance to get another shot at the title.

Bryan was on commentary for Reigns’ match with Kane. It was normal Reigns/Kane fare. Bryan was more outspoken than usual on commentary, saying that he only had one less title defense than Lesnar so he shouldn’t have been stripped. Well, there’s that whole part where he was gone forever. After Reigns beat Kane by countout, Bryan said he wouldn’t be counted out. He then took Reigns’ thunder by doing Yes! chants on the announcer’s table.

Backstage with Renee Young, Bryan said that if Reigns can’t deal with the chants, then he’ll have no chance at Fast Lane. The portrayal was that Reigns may not be mentally strong.

In the main event, Bryan lost to the Big Show by disqualification after Reigns interrupted the match to hit Big Show with a Superman punch after he was speared earlier on the outside accidentally. Reigns was trying to steal Bryan’s thunder by taking selfies with fans and throwing merchandise in the audience.

And then they had a pull apart that started out so slow, but eventually picked up steam.

Cena came out to open the show and basically ran down Rusev for never having been knocked down or beat up. He then told Rusev to stop or he’d come down there and kick his ass. And true to his word, he beat Rusev like he stole something. He even booted Rusev in the ribs while Rusev was down on all fours.

The moral of the story is, if you want to get Cena to care and be serious, just call him old.

– Dean Ambrose was trying to get Wade Barrett to sign a contract to defend his IC strap at Fast Lane. He did one mock skit for President’s Day. He then beat Luke Harper in a really good match to kick off the wrestling on the show. Later in the show, Wade Barrett faced Damien Mizdow in a match that was a backdrop for the Miz continuing to troll Barrett. He beat him with the Bull Hammer after Miz distracted him. Ambrose came out and tied Barrett’s hands to force his signature on the contract. So we’ll get that match for Fast Lane.

– Bray Wyatt did three promos about the person we’re supposed to believe is the Undertaker.

– Dusty Rhodes tried to repair the Rhodes family before their match with the New Day. Kofi Kingston beat Goldust which caused Stardust to lay a beat down on Goldie. Dusty talked to Stardust later and Stardust said Cody Rhodes exploded because of the weight of his responsibility carrying on the Rhodes name and Stardust was created.

– The Bellas stole Paige’s gear while she was in the shower and said she’d have to wrestle naked. Um, wouldn’t she have gone to the arena in different gear? Instead, she borrowed gear from one of the Rosebuds (who was Blue Pants in NXT) and wrestled in it facing Summer Rae. She beat Summer with the PTO and the Bellas came out to mock Paige again. Paige said it doesn’t matter what she wears because all that matters is the WWE Divas’ title around her waist.

– Seth Rollins came out and reminded us that he has the briefcase. Dolph Ziggler came out to interrupt him and I thought he was going to talk about naked selfies, but he didn’t. He just called Seth a douche. They had a match which ended with J&J interfering. Then, Ryback and Rowan came in to send off the baddies. Ziggler and Rollins will rematch at Smackdown. Maybe we’ll see a 6-man at Fast Lane?

– Darren Young and a nameless wrestler took on the Ascension. Titus O’Neil came in to help Young and I guess the Prime Time Players are back. No millions of dollars dance yet.

– Jimmy Uso and Naomi beat Tyson Kidd and Natalya. Kidd wouldn’t tag in so it was really more of a singles match. Naomi won and Kidd and Cesaro berated her for losing the match. Kidd and Cesaro face the tag champs at Fast Lane. I’m looking forward to that.

As I said in the intro, there were good things on this show and nothing really bad. But WWE just has a certain malaise to it these days.