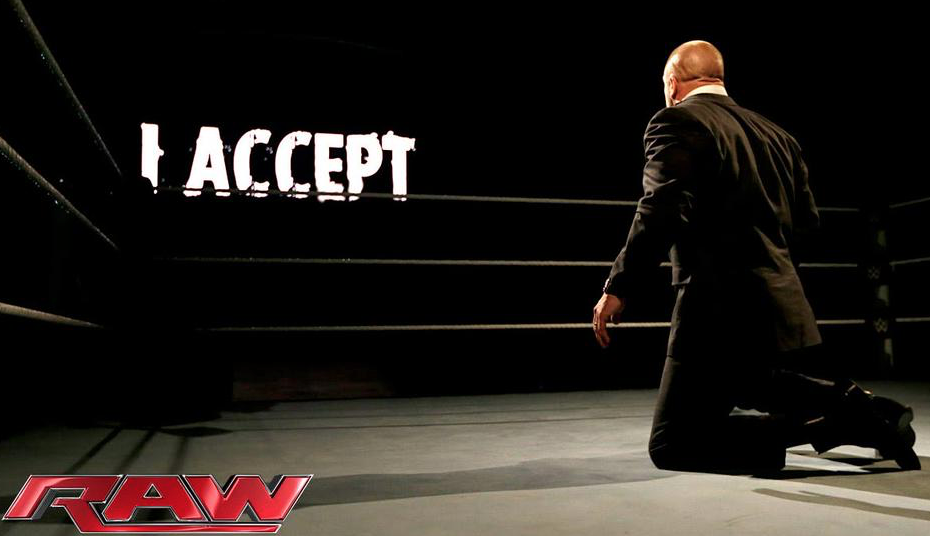 It was a fairly eventful Raw with two weeks left until Fast Lane.

Before we get to Raw, I want to apologize for not writing up last week’s Raw (which I found mostly good by the way). I was on a business trip and fully expected to be able to watch the West Coast version of the show. Low and behold, my rinky dink hotel had DirecTV and only had the East Coast version. I had a streak going that rivaled Roman Reigns’ before he lost to the Big Show.

Last week, Triple H challenged Sting to a face-off at Fast Lane. This week, Triple H wondered why he hadn’t accepted the invitation to Fast Lane. A crow sound was heard, the lights went out, a fake Sting was seen where the Shield used to enter from, a video played with Sting’s face paint showing on Triple H’s face and finally, the words of acceptance showed on the screen. So he’ll be there at Fast Lane.

A goofy guy with a pony tail and face paint was in the ring at some point while the video, which was odd. He didn’t even look like Sting. Then Triple H took a back bump.

The show long story was that Reigns and Bryan were going to try and get along even though there was really no need to. They were going to have a fight at Fast Lane. Reigns came out to start the show and didn’t have it promo-wise. He seemed to be trying to remember words rather than say the words naturally. Bryan came in and saved him a bit. He said that he wasn’t as big as Reigns, but they were just as handsome, but he was the better wrestler.

The Authority came out and Stephanie McMahon talked about how much of a cretin Bryan was for forcing Kane to be locked inside the casket at the live Smackdown a couple of weeks ago. He was like, “Well, you put me in the match.” And then he said that Triple H did some bad things in a casket before. Triple H stayed stoic while thinking about Katie Vick.

Reigns and Bryan were put in a match with the Big Show and Kane as the first match on the show. Of course, it ended in a schmozz. Team Authority ran in and Show started to attack Reigns with a chair. Kane was about to choke slam Bryan, but Reigns stopped him. Bryan was about to hit Kane with the running knee, but Kane moved out of the way, and Reigns was blasted.

Triple H booked a match later on adding Seth Rollins and J&J Security to the match making it five on two. Seth Rollins had a rough night by the way (link is NSFW).

Rollins wrestled next against Ryback and J&J interfered again.

Roman told Rene Young that he and Bryan could be teammates tonight, but after that, they were lacing up their boots for a shot at the title.

The match was what you’d expect; the bad guys beating up the good guys for the entire match. Dolph Ziggler, Ryback, and Rowan all came out to even the odds. When Big Show, Kane, and Rollins tied up with those three, Bryan had J&J set up for the win. Out of nowhere, Reigns, who was out of the ring and on the floor for most of the match, tagged himself in and hit the spear for the win.

Bryan was bothered that Reigns stole the pin and they started to argue. Reigns tried to walk away, but Bryan didn’t let him. He then shoved Reigns who then hit the ropes and speared poor Daniel as the show went off air.

I think you really could find better uses of Brock Lesnar, but on this night, he simply stood next to Paul and smirked while Paul talked. Heyman discussed liars, playing off the Brian Williams segment he did for the WWE Network last week. I thought he was going to talk about himself. But he said Bryan and Reigns were liars for saying they thought they could beat Brock Lesnar.

Dave Meltzer did say on Sunday night that the expected WrestleMania 31 main event at this moment would be a three-way, so maybe we’re leading that way already. Does Brock show up at Fast Lane?

– Sheamus is coming back and their aired a video for him.

– Paige beat Brie Bella with the RamPage. Brie came out to her Brie mode music, which may simply have been because the next Total Divas is all about the new girls wanting to see Brie get terribly drunk.

– Lana and Rusev ran John Cena down saying that he’s old, doesn’t have the fighting spirit any longer, and that he’s not tough. Cena came out to say come get some and they brawled on the outside. Rusev got the better of him, attacking his bad eye.

– Bray Wyatt beat Dolph Ziggler again. He then cut a promo later in the show making us think it’s about the Undertaker. I think they kind of have to deliver on that one now.

– The New Day beat Stardust and Goldust as the breakup continues. Stardust said that Cody is dead.

– Tyson Kidd and Cesaro beat the Usos in a really good non-title match. But it made for odd timing as right after the match was over, Rikishi was announced for the WWE Hall of Fame. The Usos and Naomi were in the ring cheering for Rikishi, even though they just lost their match.

– Sin Cara beat Mizdow who was berated by Miz throughout the entire match.

– Curtis Axel was out to say that he should be going to WrestleMania because he wasn’t eliminated in the Royal Rumble. Dean Ambrose came out and beat him and then told Bad News Barrett he wanted a title shot.

The show wasn’t really ever boring as they timed all the big segments out nicely. Though, it’s never really strong when guys wrestle early and then wrestle late again. It’s basic psychology for fans to not case as much the second time. I also thought they could’ve done something better with their world champ.