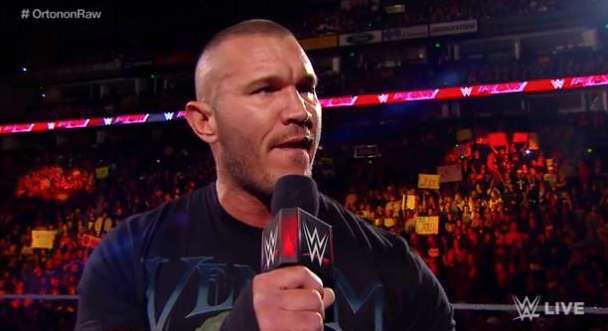 Technically, Orton returned at Fast Lane, but he had his first match back on Raw and was the storyline focus of the show.

He came to the ring and reminded us that he’d been gone since November and then had a video played that showed the Authority beating him up and laying him out. He was quite upset. He called out Seth, but instead the Authority came out which meant that Stephanie got to chastise him for a few minutes, reminding him that he’s done far worse stuff than Seth, including to her. She wanted Randy to meet with the Authority later in the show for a business meeting. He accepted.

At the business meeting, Stephanie put Seth Rollins (aka, one of the main heels in the company) in his place and shut him up after he was complaining about Orton. Stephanie might actually have the biggest ego in the company. Or maybe the writers are just scared of her. Orton decided to go with what Stephanie wanted, which was for him and Rollins to get along and tag later against Roman Reigns and Daniel Bryan in the main event.

Orton and Rollins chatted it up before the match and Rollins seemed surprised that Orton was just going with the plan. Orton said that it was because he wanted to show Reigns and Bryan that he would’ve actually won the Royal Rumble.

We’ll get the what actually happened in the main event under the next header.

Roman Reigns gets his thunder stolen by everyone.

WWE is either having second thoughts or they’re simply protecting the hell out of Roman Reigns. Or maybe Daniel Bryan will eventually be in the main event. I don’t understand what’s quite going on yet.

Reigns was in the ring talking about how he not only had to win the Royal Rumble, but also beat Daniel Bryan who he referred to as, “the other guy” and even mentioned that the crowd was rooting for Bryan. Bryan came out solely to put Reigns over with the crowd. But he too referenced Reigns being booed. He said he didn’t like Reigns originally because he was pegged as the bigger and stronger guy. But at Fast Lane, Reigns earned his respect. He told him he better beat the crap out of Brock Lesnar.

Paul Heyman then came in to butter up Reigns a bit by saying that he would take Reigns in matches over greats like Bruno Sammartino, Hulk Hogan, Steve Austin, the Rock, Triple H, and John Cena. Shawn Michaels and Bret Hart must’ve been wondering why they even had their blood feud in 1997. But he said, he couldn’t take him over Brock Lesnar. Roman said he was winning and Paul better believe that.

They barely let the guy talk and while the segment was fine, it looked like they were blatantly protecting him.

One would think that in the main event, Randy Orton would turn on Seth Rollins and that’s how Rollins would lose for the team. Nope. Instead, Reigns was ready for the Superman punch, but Bryan tagged himself in, then hit the running knee on Rollins to pin him clean. Orton was pissed because Rollins was in the match by tagging himself in blindly. But he didn’t beat him up. He paused like he was going to boot him or hit him with the RKO. Instead, he hit one on Joey Mercury. And then he walked out.

So, you have Roman Reigns facing the beast who didn’t even bother to show up. He was undercut by Bryan and Heyman on his promo time and took it like a good little soldier. And then during the match, Bryan stole his pin and he just smiled like a happy guy. If you think he’s not over with the fans and it’s solely his fault, you’d be wrong. WWE can’t write this guy to save their lives.

– Dolph Ziggler beat Bad News Barrett in a non-title match while R-Truth did commentary (since he also beat Barrett on Smackdown). Then, Mean Dean Ambrose walked out with Barrett’s belt, shoulder struck Ziggler, and walked out. Please don’t give us a four-way at WrestleMania.

– The Prime Time Players beat the Ascension who seemingly have fallen out of favor. They may end up back in NXT before we know it.

– The Usos beat Cesaro and Tyson Kidd by disqualification. Kidd tried to steal a pin with his feet on the ropes, but Naomi threw his feet off. That upset Natalya who pushed her down. When Jimmy (I’m assuming) was on the top rope to hit the splash off the top, Natalaya interfered and he crotched himself on the top turnbuckle. Naomi then hit her with a kick and she hurt her knee falling off the apron.

– Mizdow told Miz that he appreciates him as now that he’s out of his shadow and his personal assistant rather than his stunt double, he’s been contacted to do stuff. Miz wasn’t happy. He made Mizdow use the lint roller on his jacket.

– Bray cut another mindless promo on the Undertaker.

– Jack Swagger beat Stardust. That’s what he gets for having a bad match on PPV with his brother on PPV.

– John Cena came out to talk about how he didn’t really give up and Rusev and Lana cheated. Lana and Rusev baited him and made him look quite badly in the process. All Cena could do was show a sad face after they turned down his rematch request at WrestleMania.

– A pretty decent Sting video was played to remind us who the guy was.

– The Bellas beat Paige and Emma. Paige didn’t even get in the ring. Emma was in, ate Brie’s finisher, and the match was over. Paige booted Brie, but got hit with the Lex Luger forearm and was chastised by Nikki for hitting her sister. They must’ve been short on time.

– The Bushwhackers are in the Hall Of Fame. I wonder if Jamison will be there? Let’s hope their speeches are short.

– Curtis Axel, who is quite entertaining in his jobber gimmick, put his hat into the ring for the Andre The Giant Memorial Battle Royal. So did Ryback. Then Ryback killed him.

As you can probably tell by my sarcasm, I felt pretty let down by this show. They do have four more weeks to shape up this card, but from a logic standpoint, it’s hard to figure out where they’re going. And their booking of Reigns was pretty piss poor on this show.

The showline storyline was about Randy Orton returning, but nothing happened. There was no advancement at all.