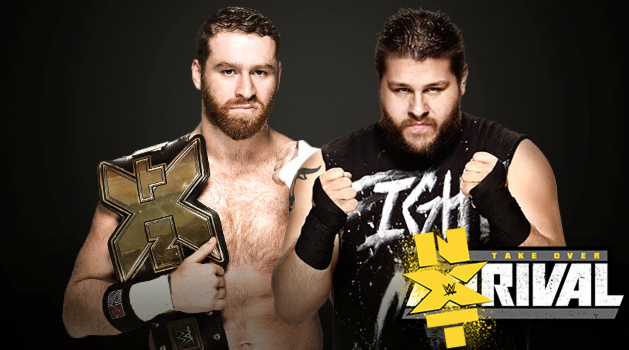 Itami is getting much better at the style. He had a nice fire tonight even if the crowd was half with him and half with Breeze. It was a very good opener. Breeze used the figure four on the outside to injure Itami’s leg which was good story telling because most of Itami’s offense is kicks.

Itami kicked his way through his comeback and won with his running boot.

Dempsey got more offense than before against Corbin and even hit the diving headbutt, but he still lost to the End Of Days.

I like that the announcers mentioned Sin Cara’s recent success on the big roster and thus, being away from Kalisto of late. They teased it as a way to give the Dragons an excuse in case they lose the match.

Blake and Murphy remind me of an old WCW tag team from the early 90s. They’re pretty generic still, but can wrestle. Blake and Murphy didn’t quite use the old Power and Glory finisher on Sin Cara, but it was close. Murphy reversed a suplex attempt by Sin Cara and Blake hit a froggy splash off the top rope immediately to get the duke.

In case you were wondering about Balor’s entrance…

Balor is your new number one contender. This was great stuff. It started out slow, but soon, the high spots were flowing. Neville didn’t hit his Red Arrow, but did hit a corkscrew moonsault of sorts from the second rope for a two count. Balor’s comeback was long and simply led to the finish. He hit an array of moves before the double foot stomp from the top.

Bayley Vs Sasha Banks Vs Becky Lynch Vs Charlotte

The women were able to showcase their stuff tonight. The match was set-up for babyface comebacks. Charlotte was thrown out early on and was out of the ring, which enabled Banks and Lynch to double team Bayley. But they split up quickly. Baylay got tons of babyface hope spots where she looked like she was going to get the victory. Tons of Bayley to belly suplexes including one on Charlotte from the top rope.

Near the end of the match, Banks had Charlotte in a crossface. It was on for a long time and it looked like Charlotte would tap. She didn’t and actually dislodged Banks’ hands, but Banks quickly rolled Charlotte up to win the title.

NXT has its own Brock Lesnar. He’s a little shorter and he’s a little fatter, but still devastating.

Owens beat Zayn nearly as badly as Lesnar beat up John Cena at SummerSlam. Zayn sold for what seemed like the first seven or eight minutes before getting spurts of offense. But even in getting offense, it definitely felt like he was desperate because Owens was too big and strong.

Owens hit some huge power moves including this one which looked difficult as all hell.

Pumphandle neckbreaker over the knee from Kevin Owens! #NXTTakeOver pic.twitter.com/ADqlmwSgqW

In some foreshadowing before the finish, Zayn did a moonsault from the apron to the outside and banged his head on the ramp.
Zayn had a couple more opportunities to win including hitting that exploder suplex into the corner. But he couldn’t hit the Helluva kick because he felt woozy from the earlier spot. That enabled Owens to powerbomb him to death. He couldn’t pin him. But the ringside doctors asked the referee to stop the match and Owens was declared the new champion.