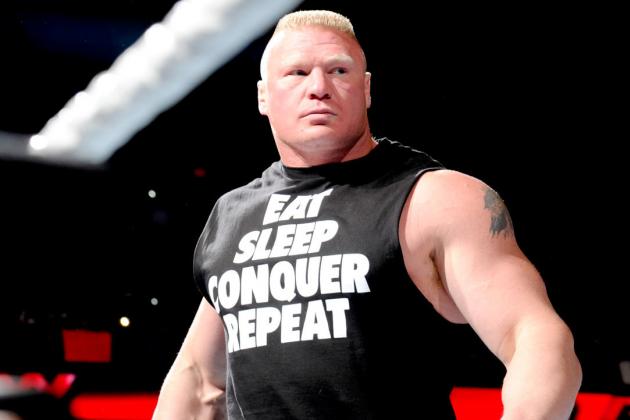 What’s Brock Lesnar going to do after WrestleMania?

That seems to be the million dollar question and just when you think you have all the answers, Roddy Piper changes the questions. Or something like that.

The prevailing theory in late 2014 was that Lesnar was on his way to UFC once his WWE contract expired after WrestleMania. Technically, his last date as far as we know is the Raw after WrestleMania. Lesnar is expensive and the WWE Network wasn’t doing as well as WWE had been projecting and they were making major cuts just so their bottom line for the year didn’t look horrible.

Dave Meltzer has called him the luckiest guy because of his contract coming up at a time when the major companies are dying for big stars. UFC was struggling with their PPV buy rates and could use a big name. He’s historically their biggest draw. And with Viacom behind them, Bellator could up the ante if they wanted.

I heard from multiple people that Brock Lesnar vs Frank Mir III was the plan for the UFC show in July during International Fight Week.

But the dynamics changed when the WWE Network finally hit the million subscribers mark the day after the Royal Rumble. They could now realistically afford him again. With the kush schedule he would have with them and not having to train hard or possibly get beat up, WWE looked to be the leader in the clubhouse for his services again.

And then, Sunday night happened. Frank Mir beat up an aging Big Foot Silva and called Lesnar out at the post-fight press conference.

When I saw Mir knock out Silva, my first thought was, “Lesnar’s value just went up again and I’m not quite sure WWE knows.”

The word after the show was that there were issues backstage that caused WWE to write him out of the show. My feeling was exactly what I thought on Sunday night. Lesnar knows his value went up thanks to Mir. And WWE doesn’t understand.

Earlier Wednesday, there was a silly Reddit rumor that Lesnar walked out because of Roman Reigns failing a drug test and Lesnar not wanting to be associated with a drug cheat. That rumor has since been removed. Dave Meltzer said there was nothing to it.

RT @davemeltzerWON: Quickly, nothing to the Reigns rumor. [Rumor being that Reigns failed a drug test.]

So where do we stand now? In the March 2, 2015 issue of the Wrestling Observer newsletter, Meltzer said Lesnar’s not showing up on Raw had to do with contract negotiations.

This is what we do know. Lesnar flew into Nashville and was there when the show started. There was a business disagreement between Lesnar and Vince McMahon, related to negotiations regarding Lesnar signing a new contract. Speculation that the negotiations included Lesnar wanting to do a UFC fight while under his next WWE contract were not part of this at all. It was only related to the offer and terms of the new contact itself.

He also said that most in the company expect Lesnar to show up for his four remaining dates since not doing so would be a contract breach.

There are just over four weeks until WrestleMania 31 where Lesnar will defend his WWE World Heavyweight title against Roman Reigns. While most feel that Reigns will win that match and the belt, the mystery around what Lesnar will do overshadows the entire event.

Everything has fallen right for Lesnar and like Meltzer said, he might simply be the luckiest person right now in all of combat sports.

I personally think he re-ups with WWE. But maybe that changes based on what happened Monday. We’ll know for sure in four weeks and probably sooner.