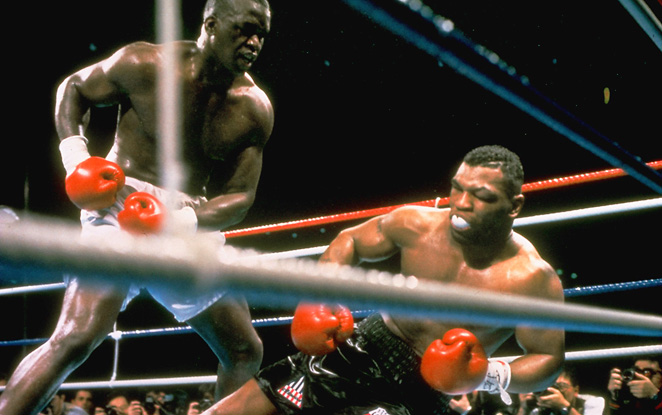 It was the craziest night.

I think at least three out of the top ten craziest sporting events I’ve seen live have been Mike Tyson fights. I remember being so weirded out when Tyson lost the first fight to Holyfield and then wondering if Mike needed psychiatric help when he bit Evander during their second fight. But this one may have been bigger than those to me. It was definitely more memorable.

Everyone knows how to tell the difference between big moments and non-big moments. Where were you when it happened? If you remember, it was probably a pretty big deal.

I know exactly where I was on February 11, 1990 when James “Buster” Douglas upset Mike Tyson to win the heavyweight title. My dad and I were at his friend Bill Kleidon’s house which is a place we watched many big fights during that time frame.

Even as Douglas won round after round after round, we all figured Mike would eventually turn it on. Even though Buster fought Tyson like most experts thought was the way to beat him, we all still figured it was a mirage. Even after Tyson’s eye was swelling and his corner didn’t have the right equipment to deal with the swelling, Mike was going to unleash a vicious uppercut. Even though Tyson looked like a helpless child with no answers in the corner, he had some ferociousness left. And even though Buster looked calm, cool, and collective in his corner, we still thought Mike was winning this fight.

And just like that, in a ninth round he was losing, Tyson unleashed the punch we were expecting all night. Except, Buster got up. For those nine seconds that Buster was on the canvas, Tyson looked like his unstoppable self again. But when Buster got up at the count of nine, it seemed like Mike was that helpless guy sitting on the stool in between rounds again. If he had anything left, Buster broke him again simply by standing up to his power and not staying down.

When Buster put Tyson on the floor in the tenth, I remember screaming at Mike to forget about his mouthpiece and get up. But after thinking about it for a second, it hit me. Mike was knocked loopy. He didn’t know where he was or what he was doing. And I was so bummed about that.

I spent the night at Bill’s house as his son George was my buddy and I remember Bill waking us up saying that Don King was going to get the fight overruled. That made the event even more surreal. Don King said that the count was too slow and it should’ve been a ten count instead of a nine count.

But it was a Mike Tyson you never thought you’d see. His face was slightly bandaged. He was sitting next to King. And King was begging for the fight to be overturned. Originally, two of the boxing federations agreed with him, even if the argument was a bit weak. But soon there after, Buster was declared the undisputed champ.

There’s a small side part to this that most people won’t even remember, except wrestling fans. Just two weeks after the fight, Mike Tyson was scheduled to be the special referee for a Friday night Main Event match between Randy Savage and Hulk Hogan. This was several weeks before WrestleMania VI, which was headlined by The Ultimate Warrior and Hulk Hogan. After he lost, Buster Douglas took his spot for the match and the night ended with Douglas “knocking out” Savage with a right hand.

Legend says that there might’ve been something to those Mike Tyson vs Hulk Hogan rumors. But when Tyson lost to Douglas, that was all thrown out the window. But history says that all was not bad because in 1998, Mike Tyson came back to the WWF to give some publicity to a guy named Stone Cold Steve Austin. That didn’t work out so badly.

If you want to learn more about that fight, check out Joe Layden’s book The Last Great Fight: The Extraordinary Tale of Two Men and How One Fight Changed Their Lives Forever.

Guide To UFC 255: Figueiredo vs. Perez, Shevchenko vs. Maia