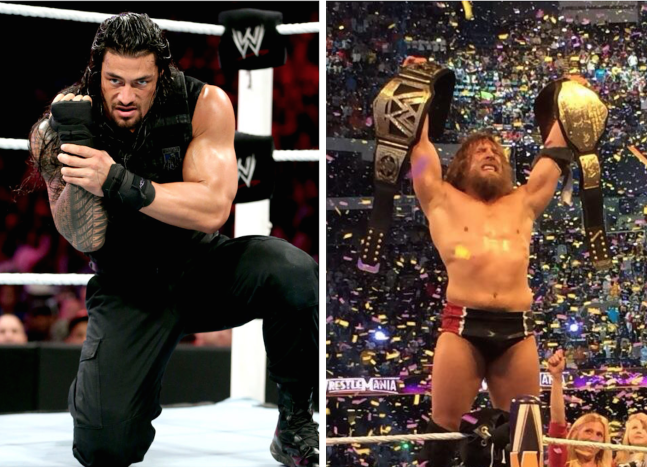 Who will be the 2015 Royal Rumble winner? We have our predictions.

The Royal Rumble is here. It’s my personal favorite PPV. It kickstarts the Road To WrestleMania (or the WrestleMania season) and we get to see where things unravel.

In some years, like 1992 (which Alan, Duan, and I reviewed recently) there are many wrestlers who you can see winning. In other years like 2001 or 2002, the star power is so high that you could actually fantasy book the main event for WrestleMania.

But this year? The superstar depth is not there. There are very few people who can realistically win this match. And out of those who can, most of them are babyfaces.

Almost since he was the second to last man in last year’s Royal Rumble, the expectation has been that Roman Reigns was the choice to win this year’s match. His 12 eliminations last year was no mistake. But his rise has been slow and monotonous. Add in losing some time to a hernia injury, and he’s maybe as cold as he’s ever been. Is he cold enough for someone else to slide in and win this Royal Rumble?

Out of the rest of the possible choices, Daniel Bryan is probably plan B. Or maybe plan B+. Can Dean Ambrose win this match? What about Rusev or Bray Wyatt? Randy Orton?

None of those other choices excited you either?

So it may simply be a two-man game. And if WWE wants to play with our emotions, they should have Bryan and Reigns enter as one and two.

The FGB crew gives their thoughts on who they believe to be this year’s Royal Rumble winner.

Duan: Daniel Bryan
As much as WWE has an awful track record when it comes to decision making in recent years (and they do) they don’t tend to repeat catastrophic mistakes. Sure they will make the same bad choices again and again, but those are usually the small things – things that will have a long-term accumulative effect – not ones that will trigger an instantaneous backlash. They know how to control the surface damage. This is not WCW. This is not TNA. They’re not clueless enough to think they can do the same things they did last year and not have to answer for it. That’s a very long-winded way of saying this: Daniel Bryan is winning this Royal Rumble and Roman Reigns is not. This will be WWE’s way of acknowledging that they got the booking of this show wrong in 2014 and the message was heard loud and clear. They will find something else for Reigns which will keep him clear of being viewed as the guy standing in Bryan’s spot in the eyes of the fans. They’re not going to give a death sentence to their chosen guy. They’re smarter than that. Bryan wins it and probably from an early draw too. I’ll shoot for #9.

Don: Roman Reigns
One thing I really don’t like about Royal Rumble booking is that only a handful of guys could have a chance at possibly winning. Those are Bryan, Reigns, Orton, Ambrose, and Ziggler. What’s one thing you notice about this list? Other than Orton, they’re all clean babyfaces. And Orton isn’t even back yet. Looking at the top heels, you have Rusev, Big Show, Bray Wyatt, and possibly Seth Rollins.

I love guessing who the final four are going to be. This year I’m picking Reigns, Wyatt, Bryan, and Ambrose. If Rollins is in the match, he’d be in the final four. It would be great to have three of the four be former Shield members.

Daniel Bryan: He never lost the World Championship won at last year’s WrestleMania. A matchup between him and Brock Lesnar would be an awesome David vs Goliath.
Dean Ambrose: He’s just got IT. I hate saying something like that, but this guy could be the next major star. Him winning would blow the roof off.
Roman Reigns: I’m still not sold on him. I want to like him, but he’s being pushed way too hard, way too fast. He’s the poster child right now, but he’s missing something.

Who do I want to win? Dean Ambrose
Who should win? Daniel Bryan
Who will win? Roman Reigns, as he tosses Bryan out, eliciting a riot
Dark horse? Seth Rollins, with help from J&J Security

Big D: Roman Reigns
Who should win: Daniel Bryan
He’s the most over guy in the company, who just returned from injury and whose lack of presence in the Rumble last year damn near ruined the show. Also, the show is in a smarky market, so it seems IMPOSSIBLE that anybody else could win right? RIGHT? Wrong. This is modern WWE, where nothing makes sense, nobody is over, and top babyfaces recite nursery rhymes. Bryan vs Lesnar is the only main event that I think can capture the imagination of everybody – and we likely won’t see it. Thanks!

Who will win: Roman Reigns
The lack of pop the guy gets and his ridiculous promos don’t matter because boy, when they wanna push someone, they’ll push ’em and shove ’em down our throats until we accept it. Like Punk said, he’s “pretty”, and he IS, and he has charisma and has a great body and is an athlete, but is he really ready to be the top dog? I’ve said for a while. He needs one more year and forcing a guy on top too soon can hurt him. Still, He’s probably winning this.

GG: Roman Reigns
I think Duan makes all the sense in the world in his pick of Bryan. But my only counter to his argument is that what they may have learned from last year is that Bryan is their ace in the hole. They can always go back to him at the drop of a hat because of how accepting the crowd is of him as their guy. I still think they’re leaning toward Reigns at this point and if they feel they need to add Bryan to the title picture, they can at a later date.

I want Bryan to be the guy and I think it’d make for a pretty special Royal Rumble if he were to win. But I think they’re staying on course. I do have a sneaking suspicion that we may see shenanigans at the end of the show like they’ve done before to pop a rating on Raw. Could we see another tie in the Royal Rumble? That would be a way for them to keep Bryan in until the end and not have him actually lose the match in front of that Philadelphia crowd.