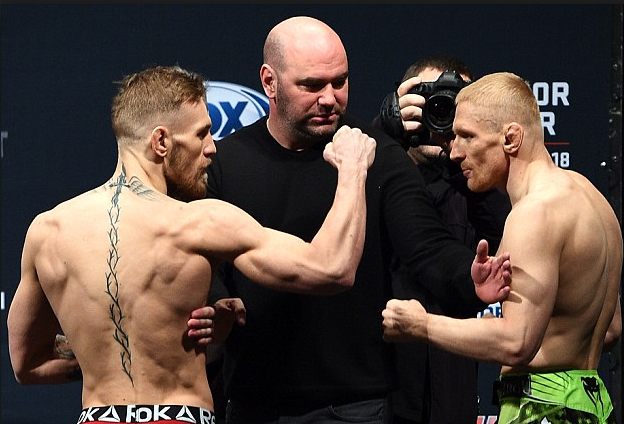 Can Conor McGregor become the number one contender?

If you watched any football on Fox this afternoon, you probably saw the inset promos by McGregor. The UFC is doing their darndest in publicizing him and now he just has to win his fight. If he does, he’ll face Jose Aldo sometime later this year.

Not much of a first round. Both guys are southpaws. Tibau is much stronger and his punches have more on them. Parke looks comfortable. You probably have to give the round to Tibau slightly.

Tibau scored a takedown and is in control. Parke has a weird strategy here. He’s throwing some fancy strikes, though nothing really connecting and then he ties up Tibau, which is actually to Tibau’s advantage.

Parke won a very good third round. He was first on the strikes and if this was a five round fight, he’d probably pull away. However, I think Tibau won the first two rounds.

Stallings was hanging in there until he met a quick straight right that he never saw coming. He went down and on the ground, Hall caught him again. He had a nasty cut over his left eye, both above and below. Herb Dean paused the fight and had the doctor come in. The doctor didn’t clear Stallings and it was stopped.

Winner: Uriah Hall by way of 1st round stoppage.

The first round was competitive, but Henderson was more active and did a better job at landing the bigger shots. He caught Cerrone’s attention with a nice lead right hook. He’s also using a front leg sidekick to the thigh to keep Cerrone at bay.

Cerrone got a takedown and also landed a nice kick, but I think Henderson is still controlling with the fight with his striking. He’s continuing to use the kick to the thigh and landed a nice body kick.

The third round was maybe the most competitive out of the three. Both guys were active. Cerrone got another takedown, but Henderson was right up. Henderson rocked him once and landed another nice kick. I think Henderson won the fight and while it was competitive, it wasn’t close to the first fight entertainment-wise.

I guess all three judges thought Cerrone won the second and third round?

Before the fight started, Siver didn’t want to shake hands, so McGregor flipped him the bird. 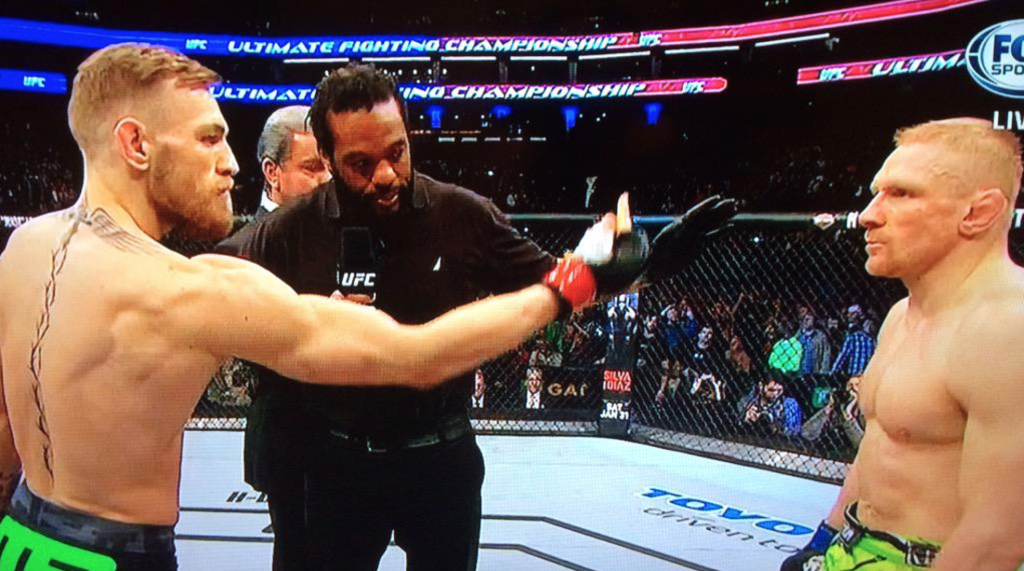 McGregor came out quickly trying to end it early, but to no avail. His straight left hand is too much for Siver and his high kicks are timed well. Siver can’t reach him with his hands and can only use his legs really to try and keep McGregor off. Siver’s face already looks brutal. This is an easy round for McGregor.

It didn’t take long. McGregor put him down with a straight left. He followed up on the ground and Herb Dean stopped it.

Winner: Conor McGregor by way of 2nd round TKO

After the fight, McGregor leaped over the cage to stare down Jose Aldo and stuck his tongue at him. Aldo just smiled.