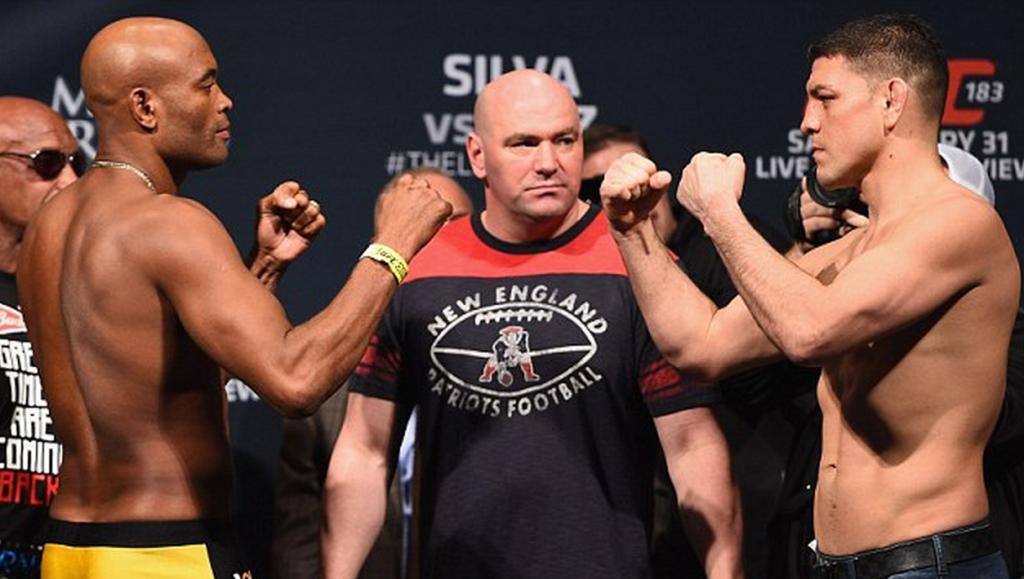 We have UFC 183 live coverage tonight.

The UFC has started out strong in January and would like to keep their nice streak of successful shows going. Their luck may have run out for next month’s show with Chris Weidman going down with injury, but they can worry about that later.

They were some issues with this show. Diego Brandao was supposed to face Jimy Hettes, but Hettes was ruled out of the fight because of a medical condition and the fight was cancelled. John Lineker missed weight, but still faced and beat Ian McCall. Kelvin Gastelum also missed weight (and in a big way), but his fight with Tyron Woodley is still on.

We’ll be back with live coverage of the entire main card.

In the prelims main event, Miesha Tate overcame getting rocked a bit in the first round to beat Sara McMann by majority decision. The scores were 29-28, 29-27, and 28-28.

Mein has some really good footwork. He was timing all of Alves punches and kicks and moving at the perfect time being in perfect position to answer with counters. He started rocking Alves with big punches, including an uppercut that rocked him. Alves didn’t have any answers for him, though he has a helluva chin. I’d score it a 10-8 for Mein.

Alves landed a huge kick to the gut and Mein crumpled into a ball. Alves followed with a big knee and started to throw wild punches and it was stopped. Awesome finish by Alves.

Winner: Thiago Alves by way of 2nd round TKO 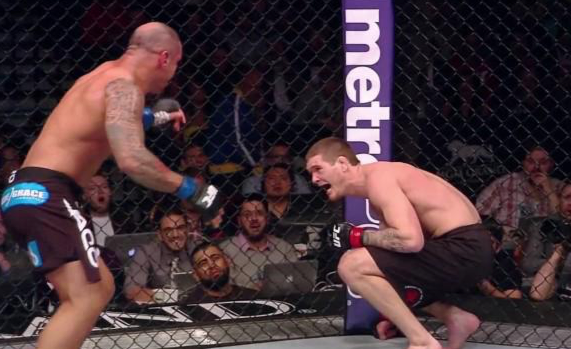 It was a pretty even round until the last 30 seconds or so. Both guys are swinging for the fences. Boetsch knocked Leites down late in the round and he wasn’t necessarily saved by the bell, but he wasn’t in a good place when the round stopped.

For some reason, Leites is trying to slug with Boetsch and he’s not getting the better of it. Boetsch landed a huge punch and Leites went wobbly. Leites grabbed him and somehow, Boetsch let the fight go to the ground. Leites put on an arm triangle and Boetsch looked out, but survived, but was soon back in it and went to sleep.

Winner: Thales Leites by way of 2nd round submission

Lauzon had his way early, surprising Iaquinta with his fast hands. He also sunk in a guillotine. Iaquinta was consistent with his combinations and was able to withhold the early barrage.

Holy hell. Iaquinta was loading up on Chuck Liddell-like right hands and he was rocking Lauzon. Lauzon was taking big right hand after big right hand and wouldn’t go down. He was wobbled for a good minute taking continuous big shots. It was stopped very late. Lauzon didn’t need to be taking so much punishment.

Winner: Al Iaquinta by way of 2nd round TKO

I didn’t expect this to be a good fight because of the styles, but it’s even worse. Woodley stayed away the entire time and didn’t try to engage. Then again, neither did Gastelum.

Round two was much better. Woodley was landing his right hand, countering off Gastelum’s kicks, but also throwing it as the first shot. Gastelum needs to pick it up a bit. There hasn’t been any wrestling at all so far.

Woodley did a lot of fighting with his back against the cage, which was odd because who knows who won that first round. Gastelum picked up the pace and probably won the round, but it wasn’t impressive at all. Either guy could win 2-1.

Well, that was an interesting round. Diaz spent the first minute taunting Silva, laying down, turning his back, and hanging up on the cage. Diaz was actually quicker to the punch early on, but later in the round, Silva started tagging him. Silva isn’t scared of his power at all.

You have to give Diaz credit. He’s staying right in the pocket with Silva and winning the mental game. I’ve never seen someone stand-up to Silva like this before. Diaz doesn’t have near the power in his hands or kicks, but he’s staying competitive. He definitely has the right mental game for this kind of fight.

Silva is starting to distance himself. He cut Diaz’s left eye and while he’s not tired, Nick is not as active as he was earlier. Silva is getting cocky, putting his guard down and allowing Diaz to land punches. He’s not afraid of Diaz’s power and he must be very comfortable with his own chin.

The fourth round was pretty tame in comparison and both guys have slowed down. Silva slept walk through it. Diaz didn’t press him either.

The fifth round was a strong one for Silva. He opened up Diaz’s eye again. Diaz could land one shot, but he couldn’t put together more than one. By the end of the fight, Silva definitely looked like the winner. The first two rounds were close. You never know. But I have Silva winning 5-0.