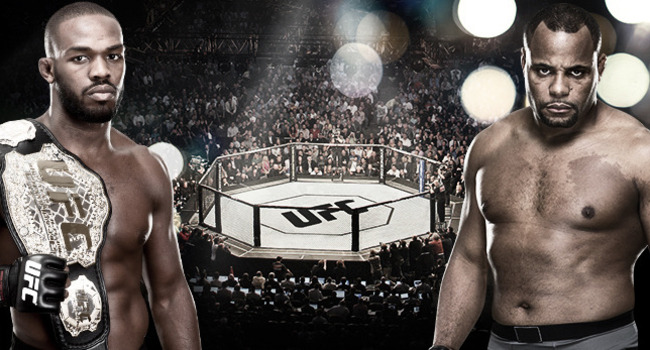 Happy New Year! UFC 182 is going to start the new year off with a bang.

These guys really don’t like each other. Take a look at this video which was after their Thursday night stare down.

This was just before previous video. Jones clearly isn't walking toward @dc_mma but at least he chose nicer words to use unlike when he thought the cameras were off! I'm not trying to say anyone is right or wrong for anything in these videos. I'm just giving you an update on the events taking place behind the scenes. #ufc182 #ufc #fightweek #breakbones @camacho100 @rosendo_sanchez @noad_lahat @slikbxr @leandrovbteam @official_aka

Last year, we kept track of our picks for most of the UFC main card fights. Cactus Jim edged out Duan for the 2014 win. But this is a new year and we all start at 0-0 again.

In addition to the FGB crew, included in our picks are John LaRocca, president of Premier Wrestling, Heidi Fang from MMA Fight Corner, and Alex Goff from Online World Of Wrestling.

Duan: Jon Jones by decision
Traditionally in MMA, when you have a guy whose instincts are that of a wrestler, he will struggle against a superior wrestler, no matter of their other attributes. That’s Cormier’s shot in this one. He’s a higher caliber amateur than Jones for sure, but that’s the only advantage you can give him. Jones is younger, quicker, sharper, the more natural striker and the better mover. All that to one side though, it’s the physical advantages of the champion that will give him the edge here. The reach difference is astronomical, both in terms of punch distance and kicking range, and I just think it’s just going to be hell for DC to close down that gap. Jones will stay light on his feet, keep distance between them and pick up the points on the outside. If Cormier can grab hold of him, he can rough him up, but I don’t see it happening enough to give him a shot of winning. This will be a frustrating five rounds for Daniel Cormier. Maybe for the fans too.

Alan: Jon Jones by decision
Jones vs Cormier has been a wonderfully built fight. Easily the most I’ve been excited for a UFC fight in years. When all the words have been spoken, and all the hype has gone away, all that will be left will be these two men inside the octagon and at that point I think Jon Jones’s good side will come through. The only time Jones comes off in any way well is when he’s defending his title during the course of five rounds of fighting. Inside the cage, he’s nothing but impressive. The one question that was unanswered about Jones was how he’d react to adversity. He answered that question in the Gustaffson fight, and the answer was overwhelmingly positive. So it’s incredibly hard to see where the chink in the champion’s armor is. Daniel Cormier will be a test and he will bring problems that Jones will have to solve, but for the majority of these five rounds I think it will be the challenger who’s trying to figure out how to deal with the champion.

Heidi: Daniel Cormier by decision
I keep going back and forth on this, but in the end I really think Cormier will be able to usurp Jones. His ability to terrorize his opponents with his wrestling could be a game changer in the fight. Despite Jones’ 84.5 inch reach advantage, Cormier’s always had speed and the ability work his way inside by effectively using it. Jones is by far one of the craftiest strikers we’ve seen in the octagon, but I believe Cormier has been able to withstand some punishment dished out by powerful strikers in the past and prevail.

Alex: Daniel Cormier by decision
Jon Jones may be the greatest fighter this sport has ever seen. Jon is a perfect combination of size, speed, and skill. Watching Jon Jones in the octagon compete is a pleasure for a fan of the sport. This Saturday night he will compete in what may be his toughest challenge. There is no way to really know or not. Daniel Cormier is a two-time Olympian with an undefeated record. Daniel’s resume going into this fight isn’t an impressive list of names, but he has dispatched them in a way that one should expect of a top challenger. Jon Jones, for all of his incredibleness isn’t resistant to a stylistic mismatch. I believe that Cormier’s background and training will allow him to gain the victory in this fight. I see Daniel’s training with his training partners in Team Checkmat with its head Leo Vieira to give him the edge.

Jim: Jon Jones by 5th round TKO
The build up to this fight has been amazing and is the type of thing that might get me back into pro wrestling if they could actually duplicate the atmosphere surrounding this fight. A genuine disgust, a two-faced champion, bad blood boiling over into impromptu brawls, an unbeatable champion and an undefeated challenger all make this a fight to look forward to. The reality will almost certainly not live up to the hype, as is often the case, but the anticipation getting there has been a fun ride. Look, Cormier is a great wrestler, he’s a decent striker, and he has come a long way in the short time he’s been in the sport. Jones on the other hand is exceptional in all areas of the game, has been around longer, is younger, faster, and longer than his opponent.

I anticipate that Jones will keep his distance, use his speed and angles to keep Cormier missing and in the process will use his lethal kicks to mercilessly pound the legs of Cormier. Cormier will need to find a way to get inside that reach by either getting Jones against the cage or managing a quick shot while avoiding the striking of Jones. If Cormier can’t get that done early in the fight, he will be in real trouble. The longer this fight goes, the more likely it is that the champion retains his belt. I see Jones’ leg kicks finally rendering Cormier immobile late in the fight. If the leg kicks themselves don’t stop this one, I think they set up a brutal finish for Jon Jones. Jones walks away victorious and so do I as I start the year 5-0 in our pick ‘em competition.

GG: Jon Jones by decision
It’s interesting to see a lot of folks picking Cormier simply because they want him to win (and I’m not talking about Heidi and Alex who can handicap a fight with the best of them). I guess that makes sense. Jon Jones will always be the bad guy. His personality comes across as the one guy you always hoped got his. This Deadspin article painted him as a horribly contradictory person. But much like Floyd Mayweather, he may not be the guy who you want to see win, but at the end of the day, that’s exactly what he does. I think Daniel Cormier presses him. I think this fight can be nearly as close as Jones’ fight with Alexander Gustaffson. But something tells me that Jon Jones pulls away late and gains another positive number in that win column.