Welcome to the first ever edition of the Top Five.

I don’t quite know the rhythm in which I’ll publish the Top Five. What I do know is that we are one of the few websites that covers MMA, boxing, and pro wrestling all within the same website. There are so many great websites that cover one at a time, but we cover all three.

I want to try to find a way to encapsulate the biggest things that are happening in all three sports. We don’t re-write every big news story out there, though we’ll write about some important things. If you’ve checked out our Facebook Page, you’ll notice that we post links to all the big stories as they generally happen. But we don’t give our thoughts about them. That’s sort of what this is about. I want to take the big news and summarize it at the end of the week.

For one, it will help us when it comes to our year end podcasts and awards. But also, it will simply give me a chance to write more. Hopefully, the rest of the team on this website will chime in on this column from time to time as well.

(By the way, the inspiration for the name of the column comes from Chris Rock’s new movie Top Five, in which people are asked to give their top five rappers/hip hop artists, all within the framework of the movie. We won’t give our top five rappers (though, Duan, Big D, and I could definitely do that – cough “Rakim” cough), but it’s catchy.)

Before we get to the top five, there were a few things that didn’t exactly make the cut, but were important. The first has to do with the fact that Lance Pugmire tweeted out Friday that discussions between the camps of Manny Pacquiao and Floyd Mayweather are heating up.

Now, I won’t really start paying attention until we hear about how Showtime and HBO will resolve the broadcasting situation, but this is the furthest talks have gotten for the fight, maybe ever. 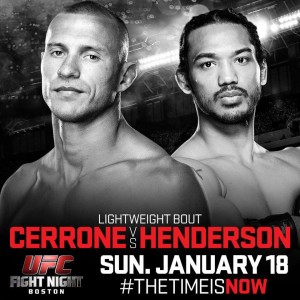 Other interesting stories from the week include Carl Froch saying that a possible fight with Julio Cesar Chavez Jr. is almost done. TNA debuted on Destination America and did more viewers than most expected, but what the heck was Jeff Hardy doing at the TV tapings? I hope Jeff is okay. And Donald Cerrone is fighting Benson Henderson next weekend just two weeks after his last fight at UFC 182. The guy is a mad man.

And now, onto the first ever FGB Top Five.

According to the Wrestling Observer, WWE’s ratings for Monday Night’s show, which was John Cena appreciation night were better than usual, but didn’t bounce back to normal pre-Monday Night football levels. While they should go up since the Royal Rumble is upcoming, as is the Road to WrestleMania, the usual trend of Raw losing a chunk of their audience to Monday Night Football, but then getting it back once football season is over, seems to not have happened.

Is it because fans are bothered with the current direction of the show, which has been some of the most boring television in years? What I find funny is the “Authority returns” angle was hot-shotted and rushed to TV probably with the thinking that the normal trend of getting the audience back would coincide with them (and thus the idea that people want to see them), but it didn’t happen. So no, the Authority isn’t really a big TV ratings draw.

This will be something to look at for the next several weeks. They don’t want their audience being down before WrestleMania. I expect to see more hot shots because of it.

On the day before Roc Nation Sports ran their first boxing card at Madison Square Garden, they merged/acquired Gary Shaw’s stable of fighters. Shaw told Dan Rafael that it wasn’t a life-changing deal moneywise. He said it was more about the future.

I have joined the company. I really do think that they can do for a fighter what nobody else can by strength of their entertainment and music talent and the athletes they represent. When someone says they’re with Roc Nation, it really means something. They’re at the top of the game, and being with Roc Nation will elevate the boxers.

Roc Nation Sports, with Jay Z as the front man, has Robinson Canoe, Kevin Durant, and Dez Bryant on their team. But they recently lost Pittsburgh Steelers wide receiver Antonio Brown and Adrien Broner turned them down.

While I don’t know whether or not it was a good deal for him, he’s foolish for his comments about Rihanna.

As part of a settlement between Oscar De La Hoya and Richard Schaefer, De La Hoya relinquished rights to promote fighters who are managed by Al Haymon, including guys like Adrien Broner and Danny Garcia. According to Kevin Iole, he’ll still be able to promote Amir Khan, Lucas Matthysse and Leo Santa Cruz, who are advised by Haymon.

Oscar has said time and time again that his goal is to make the best fights no matter what. While he may have repaired his relationship with Bob Arum, this move hurts his chances to do just that.

Schaefer has a no-compete clause, but most expect him to eventually work with Mayweather Promotions and one would think, Al Haymon who is trying to get his fighters on NBC.

It's official!! #NextChapter Happy to be a part of the @rocnation family. #RocNationSports #SOG

Andre Ward is fighting again. Hallelujah. I won’t pretend I’m privy to what happened between Ward and the late Dan Goossen. But the holdup between Goossen Promotions and Ward is over as they came to an agreement and Ward signed with Roc Nation Sports.

According to Dan Rafael, Ward will stay at super middlweight and defend his title. Ward has only fought four times since 2011 and is now 31-years old. The clock is ticking from the standpoint of him truly being a box office star. We already know he’s a tremendous boxer inside the squared circle. Will the move to Roc Nation Sports be the one that helps make him a superstar?

The best fights for him aren’t actually at his weight class right now, unless he wants to fight Carl Froch again. You’d have to actually go down to middleweight (Gennady Golovkin) or up to light heavyweight (Sergey Kovalev) for his biggest fights outside of a rematch with Froch.

While we’ve had several days for this to digest, it was absolutely shocking when Kevin Iole’s January 6th blog item came out about Jon Jones failing a test for cocaine before his fight with Daniel Cormier.

The thing that makes this story so interesting is that there are multiple layers and it leaves fans with so many questions. How is Jon Jones, the most dynamic fighter in the UFC, able to fight with a cocaine problem? How did the UFC allow him to fight if they knew what was going on? How did the athletic commission allow him to fight if they were the ones doing the test? Dana White tried to answer some of those questions, which we wrote about last week.

While many diehard UFC fans who have a connection to some of the gossip that happens within the lives of the fighters weren’t surprised Jones was caught taking cocaine, it’s still surprising when such a top level athlete has that problem in this day and age. It used to be the drug (or habit) of choice in the 80s and ruined a ton of careers. Many remember Len Bias who died after being drafted by the Boston Celtics in 1986 and was supposed to be the person Larry Bird passed his torch to. So while it’s not that surprising that an athlete with a lot of money, fame, and women (there was once a Jay Z/DMX song that was about this) has a problem, I was absolutely surprised that it was a problem with the coco.

Add to that, there was a reading from his drug test that showed a severely low level of testosterone that would make you believe that he wasn’t healthy. That is the part of the story that should have more legs, at least for people who are trying to understand why his readings are so low.

There is a Nevada Athletic Commission hearing on Monday that will continue this story.

And that’s it for the first edition of the Top Five. We’ll be back later this month.