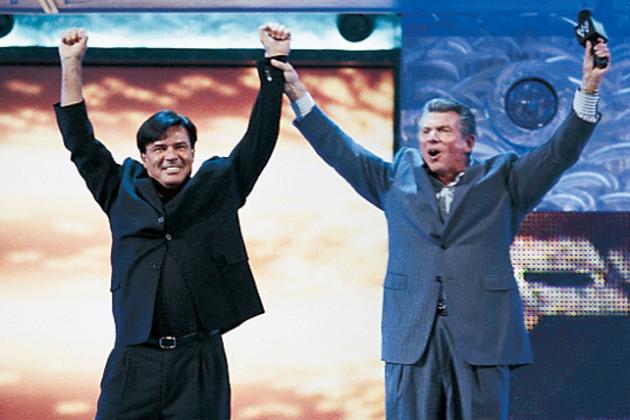 It’s the final episode of the WWE Network series, The Monday Night War.

The theme to this episode was that WWE eventually won the war because the heart and will of a visionary is more important than deep pockets. And essentially, the WWE would always do the best thing for not only their fans, but for business.

The fact that they hit both of those themes hard throughout, yet contradicted the themes throughout as well, tells me that they don’t know how to keep their version of history straight, weaving in and out throughout.

As for most of the series, the episode was a bashing of Eric Bischoff, or a Bisch Bash. Vince McMahon says that WCW was all Ted Turner, down to his business practices. I understand why he does this. It makes his story of the little engine that could sound even better, even though the reality is that Turner was simply the money man and Bischoff was actually the person Vince was competing against.

The episode goes over the historical WWE Raw/WCW Nitro simulcast, which was the last official WCW show. It featured Vince on both shows talking about buying his competition until Shane McMahon showed up in Panama City and said that it was him, and not Vince whose name is on the contract. I loved the Vince surprised face all the way down to the big gulp.

The episode tried to give a quick and dirty explanation of what happened after WWE bought WCW. For the most part, it was right on with the idea that bringing over the B+ WCW players facing all of WWE was never going to work. But this is also where the theme is contradicted. The episode explains that the reason the big stars didn’t come over with the purchase of WCW is because they were on guaranteed deals and unless WWE matched those deals, there was no reason for them to come to the WCW.

So, Vince McMahon always does what’s best for the fans, except in this case when he purchased WCW and booked an invasion, he wouldn’t bring in the guys who mattered? That seems to be quite the opposite of doing what is best for business. And on one hand, I understand why he didn’t. He would’ve changed the pay structure of his entire locker room, but he’s done that before. He did it to keep Bret Hart. He did it to bring over Mark Mero. And he would’ve made back his money on a Goldberg or Hulk Hogan during the first PPV they headlined.

The ill-fated Tacoma WCW Raw match between Buff Bagwell and Booker T wasn’t discussed at all. But there was mention of the exclusivity of their deal with TNN while disallowed them to work with another cable company. Also not discussed was the early plan to produce a WCW show which McMahon killed after the ill-fated match.

At least to some WWE wrestlers, the beef with WCW wrestlers “invading” their locker room was real. Lita and Billy Gunn made mention that they didn’t want wrestlers who didn’t sharpen their skills in WWE to get their spots. Anyone who’s been in a competitive working atmosphere understands this point. But it’s also understandable that Vince McMahon wanted the best guys available, no matter if they were from WWE or WCW.

Paul Heyman said that the WCW invasion failed because the NWO, Ric Flair, and Goldberg didn’t come along. He said it was a watered down Thunder roster. All that’s mentioned about the end of the invasion angle is how it ended, with Vince McMahon’s side winning. Oddly, there was no mention of the restart of the angle, which included ECW.

Not only were the Monday Night Wars over, but so was the invasion. The episode went into bringing in the NWO before WrestleMania 18 and how much heat Hulk Hogan, Kevin Nash, and Scott Hall had immediately. Vince McMahon talked about bringing Eric Bischoff in as his Raw General Manager after the invasion angle was over. Again, he mentioned that the idea was to give the fans what they wanted. However, Bischoff should’ve been leading the original WCW invasion, but was instead brought over a year later when it wasn’t as important. And more than that, on the night McMahon brought in Bischoff, they hugged, which killed off over a year of possible angles where McMahon vs Bischoff could’ve been a new war of its own.

Stephanie McMahon said when Bischoff came in, they did things to embarrass him and that was the true victory. This point is ridiculous. The true victory was when WCW went out of business, not when Eric Bischoff was made to look like a fool. It’s true insight into the way they think and again, contradicting the overall theme which is that Vince does the right thing. It shows you that instead, when they feel necessary to help their egos, they will create television that has nothing to do with actual business and instead is merely for their own entertainment.

At the end, the story was that thanks to Vince McMahon winning the war, WWE prevailed and went on to do bigger and better things. What they didn’t say was that winning the war also made wrestling less popular every year after.

After watching all twenty episodes, I’ve learned a few things, but what stands out the most is who tells the truth most, or to be more precise, who lies the least.

Hulk Hogan and Kevin Nash are on the side of lying the most. While Vince McMahon chooses his words better, he still tells tall tales. Ric Flair’s comments were mostly about Bischoff and seemed to come from the heart. Wrestlers who were fans during the wars who come across best are guys like CM Punk, Daniel Bryan, and Cesaro. The Miz, as always, comes off as someone who is saying exactly what the producer wants him to. But they don’t really matter.

I think if I had choose a guy who lied the least throughout the series who was a central figure in the story, it would be Eric Bischoff. Some of this is because they used a lot of his 2003 interview when he had just come back to the company and I’m sure was trying to seem like a team player. But he also had the most self-awareness about what happened and what he did wrong.

The mere fact that the WWE finds their victory as what’s best for business even though they screwed up the invasion and have made the business less popular as a result, shows that overall, the theme that they tried to force down our throats is actually more Disney than truth. But I guess if the theme was that WWE won the wars and then creatively became flaccid, it wouldn’t have been as fulfilling a story for them to tell.

Again, if you want to read the real story of WCW going downhill including tons of insight into the Monday Night Wars, check out the Bryan Alvarez and RD Reynolds book called Death Of WCW. Thanks for hanging with us through all twenty episodes.