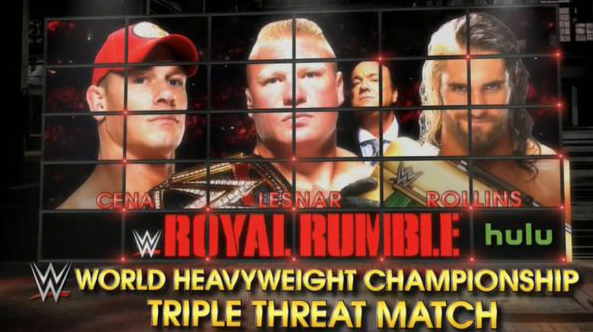 Welp, that vacation from crappy Raws sure didn’t last long.

If the wrestling gods were fair, tonight’s Raw would do the single worst rating in Raw history. This way, it would show Triple H and Stephanie McMahon that in fact their return to the show was misguided and not necessary; at least not this early. Why not let that stipulation marinate a bit considering it was built as one of the most important stipulations in the history of the WWE. But instead, they come back on the first Raw of the year, with zero national sports competition. The rating should be up decidedly and they’ll crow about it even though it will be the normal audience comeback after Monday Night Football (and the college football season) are over.

The show started with Cena and the babyfaces in the ring. Cena gave an apology for bringing the Authority back and then the Authority came out. Stephanie and Triple H were over the top in their deliver all night making them quite annoying, so I guess it worked. They introduced Seth Rollins and to reward him for bringing them back, he was added to the World Heavyweight title main event. So Seth probably isn’t going to be in the rumble match itself which is a shame, but should be able to add some spice to the title match.

Throughout the night, Kane and J&J Security would ruin the night for the babyfaces. Dolph Ziggler faced Wade Barrett for the Intercontinental title. Nakamura/Ibushi, this wasn’t. But it wasn’t bad either. Ziggler pinned Barrett quickly to win the match. Or so we thought. Barrett beat up Ziggler after the match and Kane restarted it as a two out of three falls match, which Barrett won by winning the next two falls. While I still don’t like the way Ziggler treats each match as a performance rather than as a fight, what he’s much improved at these days is selling. He might be the best guy in the company at dying and then coming back to life. However, it doesn’t work as much when he loses ever other match like this one. Barrett got his strap back.

Jamie Knoble and Joey Mercury refereed Erick Rowan and Luke Harper, which meant that Luke easily won because of their cheating. Kane and Rollins beat Ryback in a handicap match after two curb stomps.

So why did I mention those three matches? During the final segment, John Cena Appreciation Night was a way to blame John Cena. The Authority came back out and singled out Ziggler, Ryback, and Rowan. They reminded everyone of their promises to make life hard for the three for joining Cena’s team at the Survivor Series. They teased 30, 60, and 90 day suspensions. But in the end, Stephanie copied her father’s, “You’re fired!” line and “fired” all three.

One thing to note is that Triple H took a few digs at Sting, possibly setting up a WrestleMania match with him.

The Ascension is singled out.

For some reason, The Ascension was given the task of cutting a promo and in doing so, may have stepped over the line of distasteful by mimicking the Road Warriors and mocking Hawk’s “Oh what a rush!” They also dissed Demolition. This caused JBL and Booker T to absolutely bury them 10 feet deep.

What may have worked better is if they said they were of the same lineage as both of those great teams since people see them as complete ripoffs anyway.

Lance Storm didn’t enjoy it at all.

Nothing like making fun of a guy who has passed away. #BadTaste #RAW

May not mean much to others but I'm turning #RAW #RAWCorpusChristi off! #Respect #RIP #Hawk

– Roman Reigns beat the Big Show by disqualification and then speared him as he was holding the steps. Big Show laid out with the steps on his head was a great visual.

– Natalya beat Nikki Bella. Paige was in her corner.

– Bray Wyatt hit two Sister Abigails and stuffed Dean Ambrose in the ambulance to win their Ambulance match. This program is dead and Ambrose might be as well. I wonder if they’re setting up Wyatt for the Undertaker.

– Miz, Mizdown and Alicia (who attacked Naomi before the match) beat the Usos and Naomi in something Jim Ross would call bowling shoe ugly.

– Adam Rose and Big E either went to a no-contest or E won by disqualification. Two of Rose’s Rose Buds came in, but they were in weird spandex costumes and masks. One looked like a mini and hairless Giant Gonzalez. They beat up E, including giving him a finish in which the bigger Rose Bud put E up on his shoulders and the smaller one did a flip and then RKO’d him. They un-masked to be Cesaro and Tyson Kidd.

I have one question. Where was Daniel Bryan? He could’ve surely made this show much more enjoyable than it was. Bleh.