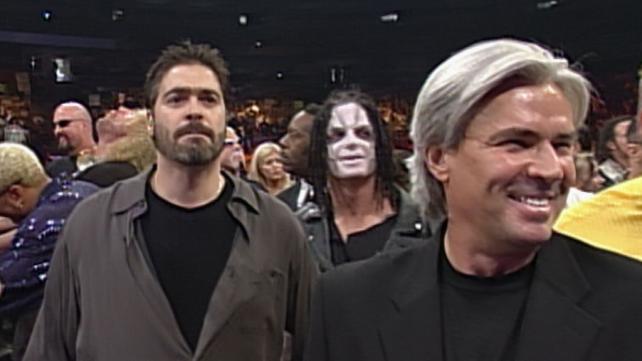 This is the penultimate episode of the WWE Network series, Monday Night War.

The latest episode of the Monday Night War series is entitled “The Fall of WCW.” This episode puts the focus on Vince Russo. Vince Russo was the head editor for WWF’s magazine publication, and was later promoted to the title of first “Head Writer” in WWF. Even though Russo was not the sole person responsible for WCW’s demise, many people consider him to be the true final nail in the coffin. Other than Russo however, the finale of the Bischoff story is also told here as Russo shares a little bit of the spotlight with ATM Eric.

The early part of this episode recaps Ted Turner placing Bischoff in charge of WCW and creating Nitro as the flagship show. Vince Russo then gets the focus, including Vince McMahon commenting on Russo and his wacky ideas; some of them great, some of them terrible. I really enjoyed a lot of the snapshots and backstage hand-cam clips of Russo interacting with talent and with Vince himself. I also loved the clips from WWF Livewire. They don’t really tell the story of how Russo actually got the gig, but they do mention his roots as the magazine guy.

The episode does a good job of painting the picture of the backstage politics in WCW and the major problems with putting the creative control clause into contracts. As WWF began to take control of the ratings war, major changes began occurring within WCW. Bischoff, Bill DeMott, Terry Taylor, and others comment on how Turner Broadcasting (later Time Warner) began to micro-manage WCW, causing Bischoff to lose power. Dr. Harvey Schiller appears to tell his side of the story of sending Bischoff home. 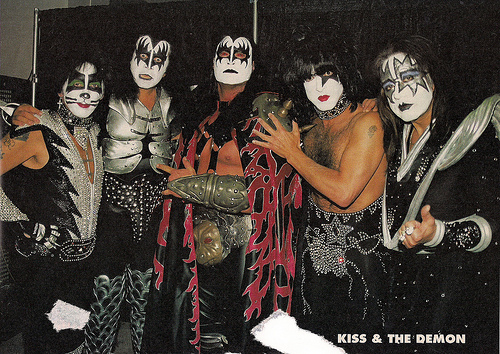 The reality is that even though WCW was quite successful in prior years, in 1999, WCW lost ridiculous amounts of money under Eric Bischoff’s control. PPV buys, house show and merchandise revenue began to drop after fans lost interest in the product due to bad decision making at the top. When you have humongous contracts and not enough revenue coming in to validate the contracts, that’s when the contracts become more of a liability despite the talent attached to them. Add that to the fact that Bischoff began spending the Turner money on things such as having expensive musical acts like Megadeth, KISS and Master P appear on Nitro. Eric paid KISS one million dollars to perform on Nitro, as part of his plan to pop a rating. All due respect to KISS because they are legends, but 1999 was about twenty years after their peak and literally nobody in the 18-34 age demographic gave a damn by then.

Bischoff went home in September of 1999 and WCW needed a new direction. Vince Russo got the call. He and writing partner Ed Ferrara joined WCW the next month. JBL and Michael Hayes talk about the concern they had with Russo leaving initially, which is funny looking at with 2014 eyes.

History proved that without an inspired Vince McMahon, Vince Russo was completely out of control. We got a glimpse of the Powers That Be storyline, which much like other Russo angles, in THEORY could’ve worked, but Russo never follows through. History has taught us that Russo was very good at writing a compelling first chapter, but he doesn’t know how to map out a story from beginning to end. Thus, everything just became chaotic.

Russo’s plan was to push young talent, which is smart, except for those aforementioned fat, binding contracts. Russo has always made excuses to blame everybody but himself for his failures. He blamed Time Warner standards a practices, the previously signed contracts, the older talent, and the difficult egos. While I’m sure that there was some truth to that, Russo’s ability to play the victim is second to none. You see it in this episode.

Russo’s ridiculous use of “worked shoots” is damn near impossible to explain to somebody who wasn’t around at the time. Wrestlers would go on television and talk about ratings, writers, backstage politics and often “break character”, but in scripted form. It was so incredibly stupid to see wrestlers go on TV and admit wrestling was fake, claim what they were saying during interviews was real, then have fake fights. This went beyond any sort of comical “fourth wall” breaking jokes and the fans were unable to suspend disbelief, which is key to enjoyment in pro wrestling. To compare it to another form of entertainment, if you were at the theater to see the upcoming Avengers sequel and mid-film Robert Downey tells the camera that the CGI is fake and he’s mad at James Spader rather than Ultron, it would confuse you.

Then came the AOL/Time Warner merger at a terrible time.

Once Russo left, Sullivan and what many called “the good ole boys network” took over. While Sullivan was a successful booker in 1996 and 1997 for WCW, this was a different time. Due to backstage tension and overall frustration, Chris Benoit, Eddie Guerrero, Dean Malenko, and Perry Saturn joined the WWF. Being the backbone of WCW’s midcard, this hurt WCW big time. So now WWF, with Chris Kreski at the helm of creative (no mention of him here or on ANY WWF release to this date), added even MORE talent and continued to crush WCW. Even with Russo gone, Sullivan and the committee really couldn’t do much. 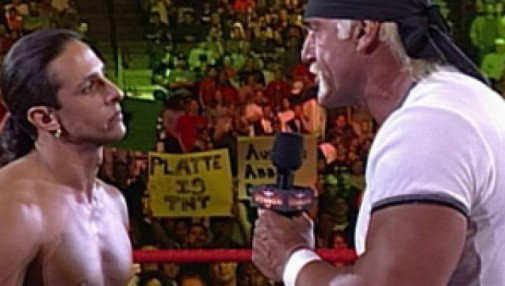 WCW’s idea was to bring back the two most successful people of the Monday Night War. Vince Russo and Eric Bischoff were brought back to head the WCW Creative Team. Then came the April 10th, 2000 edition of WCW Nitro, which is a day I will never forget featuring one of the most famous wrestling reboot shows ever. All of the belts were vacated and about seventy-seven new tournaments started for the vacated belts. A storyline was put together between Russo and Bischoff to create a feud between the aging talent and the young talent — the Millionaire’s Club vs. The New Blood. Now, did they really think that the old guys would pass the torch to the young guys? Ha!

Like I stated earlier and like history has proven time and time again about Russo angles, there was interest on week one, but by week three or four, the storylines were a complete mess. The New Blood/Millionaire’s Club angle failed to grab the fans’ attention. Backstage, Bischoff and Russo butted heads over different booking philosophies and opinions on how to run the company.

Hulk Hogan claims he never exercised his creative control until that day. Yeah, right. This topic has been the subject of quite a bit of controversy and there have been conflicting stories about what actually happened, and in this case, I don’t blame WWF for getting it wrong IF they got it wrong.

Russo did another “worked shoot” promo where he claimed Hulk Hogan didn’t want to lose to Jeff Jarrett and used his creative control clause so as not to have to lose. Hogan denied this. Russo has claimed that he spoke to Hogan earlier in the day and the plan was they’d turn it into an angle where Jarrett would lay down for Hogan right in front of a live PPV audience, Hogan would pin him, and Russo would then strip and fire Hogan immediately after, leading to Hogan being off TV for a while until he made his big comeback and would feud with Russo and Jarrett later on. They actually planned on working the other wrestlers too, which is NEVER a good idea. The “worked shoot” angle played out on TV as planned, but then Russo came out later on in the PPV and cut a promo on Hogan, referring to Hulk as a “big bald son of a bitch.” This allegedly infuriated Hogan, who filed a defamation of character lawsuit against WCW. Russo claims it was just a promo and Hogan was influenced by the internet. Hogan claims this was a plan Russo came up with to get Hogan off TV indefinitely. Hogan would never appear on WCW TV again after this. Whom do you believe? It doesn’t matter, because WCW was near dead at this point.

This would mark the true end of the Bischoff/Russo regime.

The episode then begins the burial of Vince Russo by running down the Vince Russo checklist: poles, sex storylines, absurd gimmick matches, and swerves (don’t ask Jim Ross about this one). Nitro became unwatchable. Arn Anderson still believes McMahon sent Russo to WCW as a double agent to kill WCW. It popped me to hear Vinnie Mac himself comment on it.

(If you want to see the full Russo checklist and get an in depth listen to a review on New Blood Rising PPV, you can check out the podcast I did with Brandon Draven, the Kayfabulous Lucha Bros Wrestling Show.)

A lot of people feel Vince Russo put the final nail in the coffin of WCW. In the years following the Monday Night War, Russo’s primary duties were as the head writer of TNA Wrestling. During his multiple reigns, he really exposed himself as being a little too off the wall and not a very good wrestling writer. But alongside a driven Vince McMahon in 1998 and 1999, he certainly left his mark. McMahon himself comments that Russo’s ideas were not good, but that he took them and made them good. This is the first time I can ever remember Vince publicly making these comments.

The final chapter of this episode talks about the finality of the AOL/Time Warner merger. By then, Russo was out, and the damage was done. After the merger, Turner lost control and was unable to protect WCW because he didn’t even own the majority stock in his own networks anymore. WCW lost 65 million in 2000.

There’s a little bit about the WCW sale and what led to it, including Eric Bischoff’s attempt at buying the company at the last minute. Eric came back into power for a short while and tried to put together a long term strategy to save the company, namely building up a long term Goldberg/Steiner main event program. But AOL’s Jamie Kellner decided to take pro wrestling off the Turner networks and cancelled all of WCW’s programming. Without television, pro wrestling cannot sustain itself and it essentially made WCW worth quite a bit less. Bischoff scrambled to seek out another network to save WCW but it was too late. Another buyer appeared and with that, this episode ends in a CLIFFHANGER!!!

And ladies and gentlemen… mark my words when I say this: this was pro wrestling’s version of the day the music died.

This was a fun watch, but barely scraped the surface. If you want a much more detailed and unbiased look at what really hurt WCW to the brink of extinction, Bryan Alvarez and RD Reynolds have a book called Death Of WCW that’ll tell you all about it.