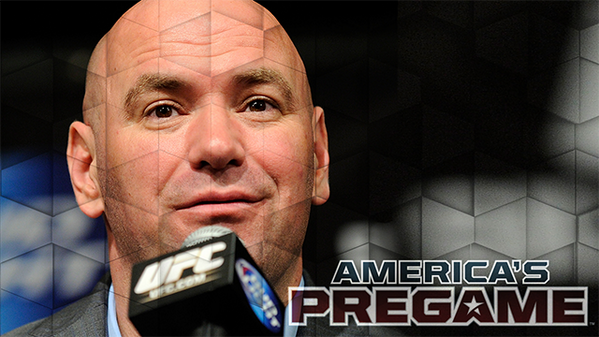 During the interview, White didn’t shy away from any questions, though gave many of his patented answers, distancing the UFC the organization from the overall testing procedure and saying it’s entirely in the hands of the Nevada State Athletic Commission. Host Mike Hill also didn’t know the particulars of the drug testing enough to ask really relevant questions.

White had a couple of interesting answers that weren’t really full answers, but again, the host didn’t follow up. He said that he knew that Jones had failed his December 4th drug test on the 4th, which couldn’t have been correct. But I think he mistakenly said that. He didn’t seem to believe Jones was taking cocaine during his training camp, even though his December 4th test came up positive. That would’ve been right during training camp. White said Jones fought because he was healthy and evaluated by doctors.

There was also nothing about the low T/E levels in Jones’ test that Kevin Iole tweeted about.

I don’t have a full transcript of the interview, but I gathered most of what White said below.

– White’s initial reaction was shock. It’s different than someone being busted for PEDs because you worry about the person first.

– Jones will be evaluated in rehab and they’ll go from there.

– Jones was in a good place going to rehab. He looks forward to talking to him.

– White says he didn’t postpone the fight because he was healthy. Doctors evaluated him.

– If he had failed for PEDs, the fight would’ve been off.

– Cormier wasn’t informed because he didn’t need to be.

– Jones had the right to fight contract-wise as long as he wanted to fight. They couldn’t take that away from him.

– You don’t worry about his image. You worry about getting him healthy and coming back. He’s the baddest dude in the world.

– White said he wasn’t supposed to be tested for street drugs. The testers made a mistake. But it was a great thing or else White may not know about the problem and now they can get him help. Everything happens for a reason.

– The NSAC regulates everything and sets the rules. The UFC follows suit. The NSAC is more concerned with performance enhancing drugs than street drugs.

– “We’re not worried about the image of the sport right now. We support Jon Jones.”