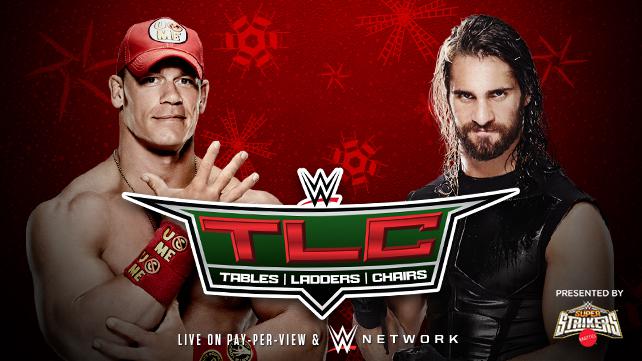 It’s WWE’s last PPV of the year. Follow along as we cover TLC.

It’s tables, ladders, and chairs oh my! You can’t get stairs to rhyme in there and the stairs stipulation is dumb anyway.

This is a ladder match.

I really liked the story of the match. Luke Harper was the big scary monster who Dolph couldn’t kill. The way he beat him was to outsmart him at every point. However, they both took a beating with the ladders. Dolph was powerbombed on a ladder that was perched on the top rope.

At one point, Luke Harper did a dive through the ropes and his face met a ladder. And it didn’t make sense for him to dive because Dolph was holding the ladder the entire time. At the finish, both men were on top of ladders and Dolph hit him with a super kick that looked more like a back kick to knock him off and he grabbed the belt. Dolph is the new IC champion.

I know Harper is good, but I’ve been withholding praise. I’ll admit. He was the perfect big man tonight.

2. The Usos Vs The Miz and Damien Mizdow

WWE style booking ruined what was starting to become a fun tag team match. I’m not sure Mizdow was tagged in at all, but at least they have matching tights.

Miz and Mizdown went to get their sets of titles and leave and one of the Usos jumped over the top rope and landed on Mizdow. Miz then hit him with the belt to get the DQ.

3. The Big Show Vs Erick Rowan

This is a stairs match. What would happen if they also grabbed ladders and tables and chairs? DQ?

Why this match got time and the tag title match ended abruptly, we’ll never know. The crowd was not into it at all. It was basically a no-countout, no DQ match with a bunch of sets of stairs.

The stairs were part of the match, but didn’t play into the finish in the way that I thought. We’ve seen the chairs used in other matches in more creative ways like guys being hit with someone’s finisher on the steps. Show chokeslammed Rowan on the stairs. He then hit Rowan with his knockout punch to the back of the head. Hey, that was Matt Serra’s finish on GSP. He then used the curve in the stairs to lay over the middle of Rowan’s body. However, it wasn’t around Rowan’s shoulders so it didn’t actually help Show pin him. Sometimes, Big Show will be in a match and you can tell that he’s just not into it. That was this.

This is a tables match.

The match is more like a handicap match since Joey Mercury and Jamie Noble are interfering at every chance. Cena had the table set up and he was about to launch Rollins through it, but J & J pushed the table away and jumped him.

The middle of this match was pretty boring, but they picked it up near the end. There was a ref bump and the table was in the ring. Rollins hit an enzuigiri and Cena was draped over the table face down. Rollins went to the top looking to hit a curb stomp. Cena got up and gave him the AA through the table to supposedly win the match, but the referee was still knocked out.

There were three refs in the ring. One raised Cena’s hand. The other raised Rollins’ hand. Mike Chioda, the original referee, put both their hands down and restarted the match.

There was a lot of plunder which made it interesting. It wasn’t a classic by any means, but it was also fairly entertaining.

Just like we all thought, it’s Cena vs Brock Lesnar at the Royal Rumble.

This was not good. The referee threw Brie out and then Nikki sprayed AJ with something in the eyes. She punched her and all of a sudden, AJ was knocked out. I guess when you get sprayed in the eyes and don’t see the punch coming, it knocks you out more in a fake match. She then hit the Rack Attack to win.

Roman Reigns did a backstage promo telegraphing his Royal Rumble win. It was rather bland.

It’s Kane and his beer belly abs against Team Cena’s least valuable player in a chairs match. Lots of plunder in this match and a single chair shot can no longer be a finisher. Kane whipped Ryback with chairs to the body while he was down. Ryback did the same to him. Finally, Ryback beat him with the Shell Shocked.

Swagger didn’t really have any moments except for breaking out of the camel clutch, but eventually, he submitted… again.

This is a TLC match.

If this match switched places with the Cena/Rollins match, I think it’s looked at as the best match on the show. But because it had to be the main event on a show in which just about every other match had plunder and crazy stunts, you were numb to a lot of it. And they beat the heck out of each other.

Ambrose did two big dives off the ladder on Bray that put him through tables. The finish was pretty convoluted. Amborse went to hit Bray with a TV monitor in the ring and the cord wasn’t long enough. He pulled anyway and it short circuited right in his face. Bray hit the Sister Abigail for the pin. I’m not sure it would really short circuit, but oh well.