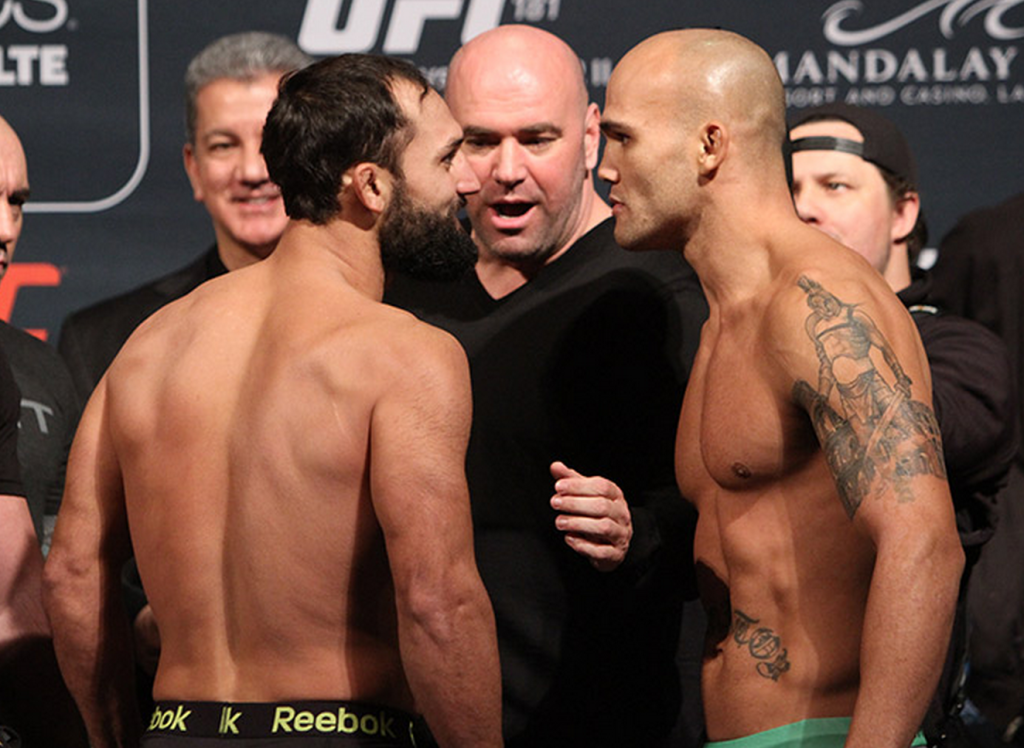 There’s a big fight show feel tonight. You can follow our UFC 181 live coverage on the website.

Trujillo dominated the first round both with his boxing and his wrestling. He was throwing haymaker after haymaker and connected and put Ferguson down early. Ferguson was hanging in there and trying to stay in the pocket, but was getting caught. Trujillo also scored two takedowns and landed some nice shots on the ground. With about a minute left, Ferguson started pressing and was landing some nice punches of his own, but not enough to come back to win the round.

Bam! Duffee put him to sleep with a right hand.

Winner: Todd Duffee by way of 1st round TKO

Schaub used his wrestling early, but Browne combated it fairly well. Browne put him down with an uppercut and pushed him down. He flattened him out on his stomach on the ground and rained down punches on his head for the stoppage.

Melendez made it tough for Pettis to open up his arsenal. He stayed close, kept the stand-up close and didn’t really allow him to get off the kicks. Whenever he did kick, Gilbert saw it and pretty much blocked it. Melendez would land a shot, get Pettis on the defensive, and then push him back against the cage. Pettis landed a punch or two late. But that was Melendez’s round.

Melendez tried the same strategy, but Pettis was much quicker in getting out of there and not allowing Melendez to trap him against the cage. He kicked Melendez in the face. Pettis had his back against the cage, Melendez came in with wide punches, Pettis hit him solid with a right hand, he dove in, and Pettis sunk a guillotine on him to finish him.

Winner: Anthony Pettis by way of 2nd round submission

Lawler came out quickly and pressed Hendricks immediately. He was landing big punches and knees. Hendricks didn’t really get a chance to sit down on anything. Lawler was chomping at the bit trying to land quickly, maybe even overly aggressive. Hendricks tried for the takedown, but Lawler had good takedown defense. Hendricks came back late in the round and landed a great three or four punch combination. He finally got the takedown. Might not have been enough to steal the round, but the tide definitely turned.

Lawler came out nicely again, landing big shots. But Hendricks took over quickly. He was picking out his shots and landing, nailing him with leg kicks. Lawler was looking for the takedown and then getting hit instead. And Hendricks still got the takedown. Hendricks had his legs tied up, but Lawler got back up. Lawler nailed him with a front kick. They were destroying each other late in the round and Hendricks tried for a submission as the buzzer sounded for the end of the round. I have the fight at one round each.

This round was clearly Hendricks’ round. Lawler looked tired. Hendricks outlanded him about 3-1. He put him on his back twice. The tide has clearly turned.

It was Hendricks’ round in the first half and Lawler’s in the second. Lawler wouldn’t throw a punch and was getting hit, but then landed two head kicks. Lawler finished the round nailing Hendricks who was on all-fours trying to finish a takedown that was stuffed. This was a pretty close round.

Hendricks is pushing takedowns and not doing much else. He had Lawler pushed up against the fence, but nothing was happening. They had to be separated and restarted. Lawler was on his knee defending a takedown, but nailing Hendricks with hammer fists to the side of his arm. He got out of it and blitzed Hendricks in the last 20 seconds of the round. If he had more time, he may have finished him. This is going to be close. I have it 3-2 for Hendricks, but it could be the opposite score.