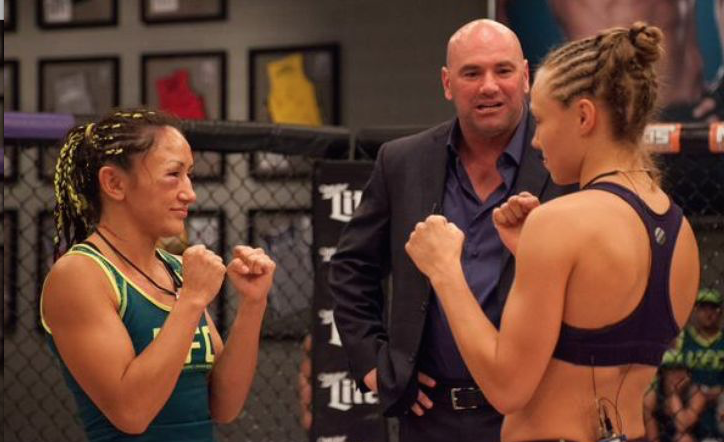 After one of the most fulfilling seasons of The Ultimate Fighter, it’s time to crown a champion.

It’s rare that I want to see a full UFC show (on TV of course), prelims included. Usually, if I watch the prelims, I’m all burned out on watching fights when the main card comes on. Not this time. I was so invested with the latest season of The Ultimate Fighter, I had to watch every fight, including the Fight Pass prelims.

The only thing memorable about Hill was that there was episode in which she passed gas for fun.

It was not a graceful dance early on. Peters Kagan is a southpaw and not strong in striking and Hill had issues trying to tame her style. But later in the round, Hill started coming on. She knocked her down with an overhand right, landed several knees, and cut Peters Kagan. Peters Kagan was very tired at the end of the round.

There were a couple sequences in the second round where it would’ve been best to stop the fight. Hill had Peters Kagan pinned up against the cage and was ripping her with knees and punches. Peters Kagan was covering up, but then would underhook Hill and take less punishment. This happened a few times.

The third round wasn’t much different, though Peters Kagan never gave up. She even scored a takedown in the round. But it was more of the same as the first two rounds.

Daly worked on the arm bar, nearly getting it once, but Chambers blocked it. She also used some pretty vicious ground and pound, passing Chambers’ guard and getting to the mount. She went for the arm again and got it with just a few seconds remaining.

Winner: Aisling Daly by way of 1st round submission.

Torres’ offense is too varied and her strikes are too quick for Magana to handle. She would go low and then come over with the right hand. She knocked Magana down with a combination. Magana never really got off.

Torres really picked it up late in the round. She was peppering Magana with right hands and side kicks. She had Magana up against the cage, but was still keeping her distance rather than trying to go for the kill.

Magana lasted the entire fight, but really had nothing for Torres. She’s just not quick enough and couldn’t keep up with the hand speed. Torres knocked her down once and then got a takedown late.

It was a nice back and forth round. Calderwood used her reach advantage and leg kicks to keep Ham away from her. Ham was still able to get inside and landed an excellent left hand to end the round. She’ll need to get inside more if she wants to win the fight.

Ham bloodied up Calderwood’s nose and mouth and Calderwood was a bit of a mess. However, she controlled the round again mostly with her size. She also scored two takedowns late. She’s grinding.

Calderwood poured it on late in the third. She hit her with a spinning back-elbow and a front kick to the face. She then scored a takedown. She had an arm triangle in, but it wasn’t tight. She got her back and pounded away, closing the fight strong.

This is a battle of headlock takeovers. Rawlings was trying to set up a right hand and Clark landed one first and on her follow through, caught a stunned Rawlings and took her down in a headlock. Rawlings did something similar later in the round.

Rawlings did it again, but this time Clark ended up in the better position. She’s maneuvering toward taking her back and looked to try and get a choke. She flattened her out, but didn’t get the choke.

Rawlings started to let her hands go, while Clark wants to clinch. They both let their hands go in the round and it was a spirited round compared to the slower first two rounds. Rawlings striking was fresher, but Clark held her own.

Herrig is strong. Ellis put her in a headlock and was about to throw her. She didn’t get her completely and Herrig immediately moved to the top position. Ellis got another takedown and Herrig did it again. Herrig tried a triangle, but Ellis got out. However, she left her arm in there and as they rolled, Ellis submitted.

Winner: Felice Herrig by way of 2nd round submission

That was a fun fight.

Penne threw Markos right on top of her head and Markos right eye was already bleeding. Penne got too high on Markos’ back and ended up in a bad position with Markos pounding on her. Penne is trying for submissions off her back while Markos is trying to ground and pound.

The cut to Markos’ right eye is just over the eye and underneath the eye brow. She also has a small one underneath her left eye. Markos is unleashing her right hand while moving backward. She’s landed it several times. Markos was on top, looking to ground and pound, but Penne rotated from underneath to on top. She’s also kicked Markos off twice as Markos tried to pounce. I think they split the first two rounds. This last one could be for it all.

Markos tried a spinning backfist twice and missed it both times. Penne came inside and ate an uppercut. I’m impressed with Markos’ hands. Penne scored a double leg and landed a nice elbow in Markos’ guard. Penne ended up behind her and tried for a rear naked choke, but didn’t get it. Markos tried for an inverted triangle at the end of the round. I’d give Penne the decision in a close fight.

Proctor threw a reverse kick that Medeiros thought was low. Medeiros threw a spinning back kick that hit Proctor in the gut and in a delayed reaction, he went down. He followed up on the ground and then sunk in a guillotine for the win.

Winner: Yancy Medeiros by way of 1st round submission

Really fast paced stuff. Cruickshank is an energetic fighter. But he doesn’t have Noons’ hand speed. Cruickshank was scrambling and got eye poked. Noons is getting more confident with this hands.

Noons got him good with another eye poke. He actually bloodied his eye with the poke. He followed up with a missed knee, so it had to be the finger. Cruickshank couldn’t see out of the eye and the fight had to be stopped.

They clinched up against the cage and Oliveira immeidately fell to his back. He is trying to sink in an armbar while on his back. Stephens picked him up and slammed him, trying to break out of it. He wasn’t able to. He was in it for a good two minutes before finally breaking out of it and ending up in Oliveira’s guard. They ended up on the feet with neither guy doing much.

Stephens looked dead in the water with another armbar attempt by Oliveira. Somehow, he got out of it. Oliveira had a front face lock in and then dropped all his weight on Stephens by picking up his feet. Stephens rolled through and got out. Stephens fought off another submission attempt and ended the round with ground and pound.

Oliveira wanted a hug to start the round and Stephens pushed him away. He wasn’t a dick about it. He’d already given him a high five. Oliveira didn’t try to win the round as much as just survive it since he felt he had a two round lead. Stephens was on top to end the round and landed some nice shots. I’m not sure it was enough though.

Both women came out fast. Namajunas was mixing up her punches with some lightning fast kicks. Esparza caught one of them and took her down. Namajunas doesn’t have a huge reach advantage, but when she extends her legs with the kicks, it’s a long advantage. Esparaza exploded with a double leg and followed up with a knee as Namajunas got up. Esparza dominated the inside clinch. Namajunas is trying for the flashy knockout blow. Esparza got another takedown. Clinched again, Esparza did more damage with knees and uppercuts. Esparza got another takedown at the end of the round. Esparza gets the first.

Esparza scored another takedown and it’s now in Rose’s head. Rose herself went for a takedown, but Esparza quickly reversed it. Rose was trying to fight off her back. Esparza got the mount and was raining punches. Rose turned over before the round was over, but not long enough for Esparza to do anything.

Rose barely lifted her leg to throw a kick and Esparza was all over it. She got the takedown, worked her way to Rose’s back and sunk in a rear naked choke.

Winner: Carla Esparza by way of 3rd round submission