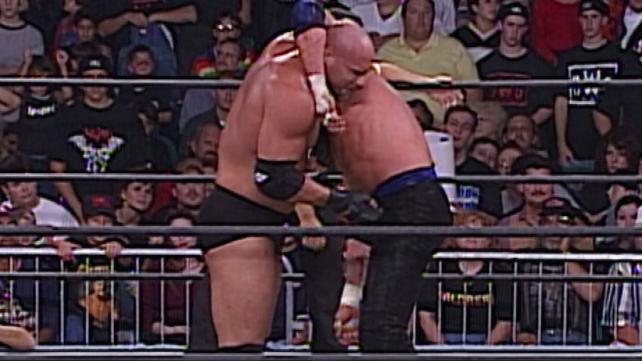 Even watching throughout, I had a hard time believing this latest Monday Night War episode entitled Building An Army was truly necessary. It had some interesting footage and tried to tell a far too simplistic narrative on yet another reason why WWE won the war and WCW lost the war.

Here was the simple premise: Greedy Eric Bischoff and WCW employed greedy wrestlers who only cared about staying on top and WWE had a competitive mid-card that helped them win the war.

In a sense, these types of all-encompassing episodes are far more successful at telling the story than the glorified wrestler bios that have been told prior (and also have been told better on their own DVDs). But because of the version of history WWE tells, the episode overall strikes out. And it didn’t have to, because they really are telling a compelling story. At the end of each episode, the conclusion remains the same; Vince McMahon was smarter than Eric Bischoff and Ted Turner when it came to wrestling. That part is probably true (as if Turner really cared). But how we get there isn’t that simple.

You can’t tell the story of how WWE used their mid-card to pepper up their events without also saying that WCW did it first. WCW’s Monday Nitro shows and PPVs in the late 90s era were littered with boring main events that drew, but the undercard matches were infused with great cruiserweight talent. The issue was that WCW never elevated that talent. They were almost always going to be in the same place they always were, which was the reason Chris Jericho left WCW for WWE. WWE took a similar idea, but actually allowed the talent to be elevated a bit more and celebrated them by putting them in compelling storylines. It didn’t always mean that they shot them straight to the top as most of WWE’s top guys were just as concerned with keeping their top spots as Hulk Hogan and Kevin Nash were, but that’s where McMahon came in. Because WWE didn’t sign guys with the creative control clauses in their contracts (learning from the Bret Hart situation), McMahon could be the final authority on everything, unlike Bischoff who because of his mismanagement allowed for a chaotic political mess backstage.

Kevin Nash brings this point up in the episode, but subtly blames it on Hogan, knowing full well that he was probably just as bad.

Of course, even though what I described above is a much more compelling story than the one they told, because of WWE’s resistance to the real history, their version wasn’t very interesting.

They portrayed the situation as WWE had a willingness to put shine on the mid-card and WCW didn’t. They stated that WCW copied their original formula from the early 90s, which is true because they copied the format of WWE’s prime time TV and PPV structure. And then said they started “stealing” talent, showing Hogan and Randy Savage as the top guys. Specifically, Randy’s brother Lanny Poffo said that Randy was loyal to Vince until Vince wanted to phase him out of wrestling and only wanted him to be a commentator. I’m sure WCW’s money offer was nice too.

What Bischoff did was offer guaranteed contracts along with creative control, which Hulk Hogan said was a bit of a bait and switch. Now, I think WWE had to have used this piece of the Hogan interview out of context. I don’t believe Hogan would’ve said that his buddy Bischoff baited and switched on anyone. Hogan had the best contract in the history of wrestling, getting a huge percentage of PPV buy rates on shows that he was on. There’s no way he thought he was baited and switched on.

The episode focused hugely on Diamond Dallas Page and Booker T as the only two guys who were allowed to become part of the main event who also started in the mid-card. I guess they don’t count Goldberg even though he started even further down the card. Goldberg was far more portrayed on the greedy main event wrestler side.

On the flipside, they also showed how WCW could take a guy, make him a main eventer, and still do it incorrectly. The Big Show talked about how when he was The Giant, he was strategically placed with the NWO because the NWO didn’t want to have to lose to him if he was on Team WCW. (This point is so interesting and I wish they would’ve hit on it more. The key to the NWO storyline is that WCW had to overcome and beat them. But the NWO guys knew once that happened, they wouldn’t be as special, so they made sure that WCW never really beat them.) He didn’t actually say it that way, but that’s really what he meant. But even in being part of the NWO, he wasn’t making as much as the top guys and wanted out. The episode tried to portray the Big Show leaving WCW as this monumental thing and at the time it was. But by his first match, he was already slotted down a peg from the main event guys and by WrestleMania of that year, he was wrestling Mankind for a chance to referee the main event. I’m sure he was happier money-wise and simply to be out of the disastrous WCW locker room, but WCW historically booked him far better than WWE ever did.

But the most interesting part of the episode was that they showed how forward thinking WWE was at this time. The Undertaker said that in the early and mid-90s, the company had gotten complacent and soft. The competition from WCW drove them to innovate. Triple H mentioned that he and Shawn Michaels would think of the craziest things to do on television in that era. Many of the guys interviewed mentioned that WWE would do a bunch of stuff hoping that one thing would stick. And they did the same with the wrestlers, giving them TV time hoping they could get over.

The reason why it’s so interesting is because by showing how they overcame WCW in the Attitude Era, they also showed how backward thinking they are today. They are similarly complacent and soft in 2014. They don’t allow guys to do the crazy things Triple H suggested. It’s mind boggling to compare the time frame and wonder if Vince McMahon truly sees any of the similarities.

The episode ended showing Vince Russo trying to get the older wrestlers to put over new talent at the end of WCW’s run, but that it didn’t work and essentially WCW died and Vince McMahon was proven to be king. Of course that’s the way it ended, but I wish they wouldn’t tell the story so simply. The real story is much more compelling.