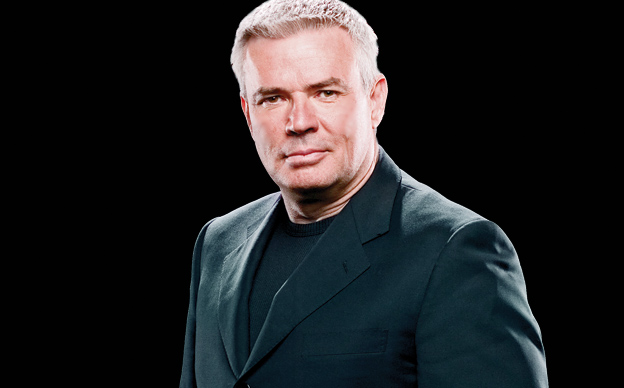 There are just three more episodes of the Monday Night War series. This one is all about pointing out Eric Bischoff’s mistakes.

You could’ve also called this episode, Death Of WCW, but instead, it was titled Mistakes On The Battlefield. It was really WWE’s attempt to sock it to WCW, as if they haven’t done that enough in this series. But this is the big knockout blow.

It’s centered around Bischoff, giving him a little bit of credit for winning a ratings’ race (the sprint), but painted as WWE needing time to get over young talent and overall being the one with the big picture. If they want to credit WCW, they say it had something to do with Ted Turner. When they want to throw WCW under the bus, it’s all on Eric Bischoff.

WWE has given full episodes to guys like Steve Austin, the Rock, Mick Foley, Chris Jericho, and even a dual episode with both Sting and the Undertaker. While this isn’t described as being solely about Eric Bischoff, it’s really what it is.

There is some fun footage early in the episode of Eric Bischoff’s WWE tryout. He’s asked who his WWE hero is and of course, even in the late 80s, he said it was Hulk Hogan. There’s a scene where you can hear Vince McMahon ask him to do an interview with a broom. It’s like the interview version of a Ric Flair match against El Gigante. Bischoff tried to sell the broom as the best broom ever. Scott Hall said that Bischoff told him the story and he believes that not getting the announcing job in WWE is why Bischoff had such a chip on his shoulder about Vince McMahon.

The episode also heavily discusses Eric Bischoff’s feud with Ric Flair. Flair’s leaving WCW because of Jim Herd and joining WWE is covered including the WrestleMania VIII main event that never happened between Ric Flair and Hulk Hogan. Mean Gene Okerlund says that he thinks one of the two between Hogan and Flair stopped the match, sort of insinuating that they didn’t do the match because no one wanted to lose. But the reality was different.

There were a few different reasons for the match not happening, one having to do with Sid Justice. In the April 13, 2014 Wrestling Observer, Dave Meltzer says that Sid Vicious was promised the WrestleMania VIII main event in order to leave WCW. Also, the Hogan vs Flair house show run was strong, but was losing steam.

After some bad houses, notably 4,500 at the Omni in Atlanta, Vince McMahon switched the booking of main events from Hogan vs. Flair to Hogan & Roddy Piper vs. Flair & Sid Vicious starting in February. Houses went up and there was no doubt the big heat was Hogan vs. Sid, not Hogan vs. Flair. This is from someone who was not a fan of Sid Vicious.

I don’t know if that had anything to do with WrestleMania. I do know that a few weeks before Hogan vs. Flair was announced, I was told the angle was that Hogan vs. Flair would be announced, but it was Hogan vs. Sid and Flair vs. Savage and Hogan vs. Flair was just a one week or so thing to set up the Hogan-Sid angle. Hogan’s recollection of course wasn’t true, as Milwaukee (November 2, 1991) did 7,800 fans; Minneapolis did 9,000, and they never had a match in Chicago. They did good business, below Hogan’s peak levels but better than Hogan had been doing for some time. But there were no major arena sellouts.

When Flair was out of the WWE main event picture, Vince McMahon allowed Ric Flair to leave and he was soon back in WCW. Hulk Hogan left WWE not too long after that. Eric Bischoff was soon the Executive Producer of WCW and Flair said that Bischoff wanted him to put him in touch with Hulk Hogan. Flair felt used because he helped get Hulk Hogan, immediately put him over, put over Randy Savage as well and once the NWO angle started, Flair was out of the big picture.

Bischoff said multiple times that if he was more mature and handled things better, many of the bad decisions could’ve been prevented. He was definitely portrayed as being drunk with power.

Booker T mentioned that Bischoff’s biggest mistake was becoming one of the boys rather than being a boss. Scott Hall said there’s a reason why they called him Easy E. Larry Zbyszko thought that Hogan and Kevin Nash were constantly working him.

Arn Anderson said they had a ton of talent, but in order to stay on top ratings-wise, they had to put together fresh main event match-ups, but at the same time, went through the talent quickly. They didn’t have a long-term plan.

As I mentioned earlier, the Flair vs Bischoff feud is discussed. Anderson and Jericho said that Bischoff skewered Flair in front of his peers saying that he wanted to be the cause for Flair being penniless. Considering many of Flair’s friends were inside the locker room, it wasn’t a smart move. Bischoff would sue Flair, Flair would countersue and Flair would be gone for many months. And it was all because Flair was booked for Thunder and had requested time off to watch his son wrestle at a tournament.

The episode quickly covers giving away Mick Foley’s title change on Nitro and causing a lot of fans who were watching Monday Nitro to switch to Monday Night Raw. And they discuss the finger poke of doom, which I’m not sure Bischoff was really part of. Hulk Hogan says he and Nash are to blame, while Nash says that he’s really not to blame as it wasn’t his call.

The show abruptly ends after Bischoff is told to take a leave the company with pay, which is ironic because many wrestlers who WCW didn’t want to use were sent home and continued to get paychecks.

There wasn’t anything about his return with Vince Russo or attempt to buy the company before WCW died. Oh well.