It was a Raw Christmas with Ho, Ho, Hogan.

The show was low on angles and storyline advancement, but high in match quality when it came to the big matches, which were all rematches of some sort from TLC. And no Brock Lesnar.

Hulk Hogan was the Raw GM tonight and didn’t come out in his usual Hulkamania gear. Instead, he was dressed as Santa Claus. Bummer for him since he probably could’ve dosed down on his medicine this week since he wasn’t showing off his arms. It would’ve been awesome if he came out dressed as Santa without the sleeves, much like that great movie, Santa With Muscles. 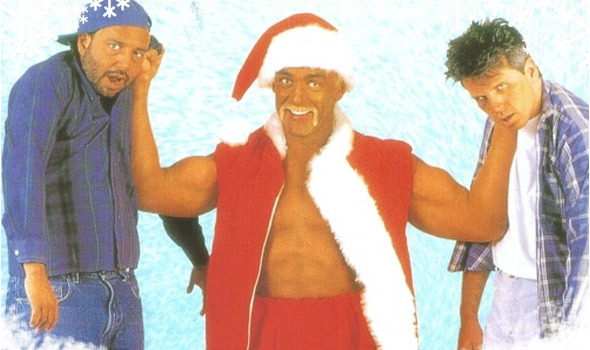 As he was talking, John Cena interrupted him. Cena’s goal was to beg for a match with Seth Rollins. Wait, Brock Lesnar destroyed him and it’s Seth’s fault? Rollins came out and continued to say how he was screwed by Sting and Cena and that the Authority needs to be brought back. Cena said no. Hogan said that since he had the power, though couldn’t bring back the Authority, he would make the match. It’s John Cena vs Seth Rollins and it would open the show.

They had a good TV match which ended with Cena giving both J & J Security an AA at the same time and then delivering one to Rollins for the win. In a sense, they are absolutely running on a treadmill until Royal Rumble, but you could do worse than Cena vs Rollins. And at least we got a clean finish.

Where’s Randy Orton when we need him?

I really wish these guys were in the main event segment. Building off their ladder match at TLC, they had another good match which started with Harper sucker kicking Ziggler before the match started. Ziggler played the babyface in distress for much of the match. While I don’t like it when he takes the crazy bumps all the time, I do think he plays the babyface in distress very well.

Ziggler won with two superkicks in a row and a zig zag. I’m really enjoying this feud.

Dean Ambrose and Bray Wyatt kill each other again.

At least at TLC, they killed each other on a PPV/Network special. But on Raw?

The real crime of this match is that the guys beat each other up again, but did so in the vein of a Miracle On 34th Street Fight, which means that you couldn’t take it as seriously as you should’ve with presents and candy kendo sticks and the such. Dean had to take a bump on a ladder which had to suck.

In a sense, the babyface was outsmarted as Dean propped a kendo stick on top of the turnbuckle and was rammed into it to lose the match.

With how much they’re protecting Bray, it does look like he may be in line for the Undertaker at WrestleMania.

– Fandango beat Jack Swagger. Maybe he should get killed by Rusev next.
– Adam Rose lost to R-Truth. Poor guy. And then he beat up the Bunny, even though the Bunny didn’t really do anything wrong.
– Edge and Christian will host Raw next week.
– Roman Reigns returned to action against the Big Show and won by countout.
– Natalya beat Brie which seemed more as storyline for Natty and TJ than anything else.
– Unfortunately, El Torito pinned poor Goldust in a handicap match between the Matadors and the bull and Goldust/Stardust.
– Rowdy Roddy Piper hosted an episode of Piper’s Pit in which Rusev and Lana were the guests. All it meant was that Ryback would come out and send them packing.
– Alicia Fox, Emma, and Naomi beat Paige, Summer Rae and Cameron when Alicia pinned Summer in a Santa’s Helper Match.
– The Miz beat Jey Uso.

It was a half decent Raw from a wrestling perspective. I could’ve used more Ho, Ho, Hogan though.