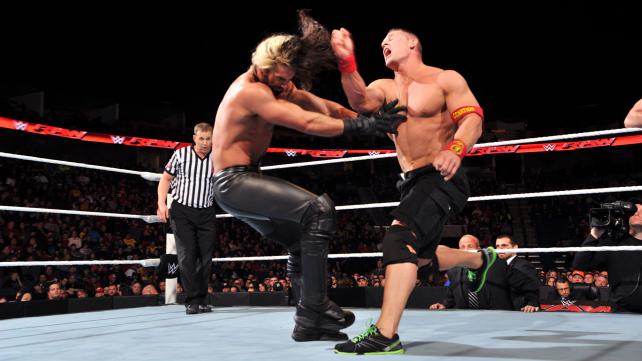 Thankfully, the computer didn’t stick around too long.

This show should be known as the preview to the Stone Cold Podcast with Vince McMahon. There wasn’t much of note to the show and what everyone was waiting for was the show to end so we could watch the WWE Network special attraction.

I think Cyber Sunday or Taboo Tuesday would’ve been a better overall show, but at least the anonymous Raw GM wasn’t on the show much at all. In fact, unless I missed him (yes, it’s a him because it’s Hornswaggle) he was only on the first segment which was quite the segment.

The anonymous GM alerted Michael Cole to read an email, but John Cena came out before he could read it. Cena made a joke about Brock Lesnar and then mentioned that the Authority was gone. The anonymous Raw GM chimed in again, but Cena closed the computer. Seth Rollins came out with J & J Security. Rollins reminded Cena that he pinned him and credited Sting for helping Team Cena win rather than Dolph Ziggler. Seth wanted to the Authority back and Cena made him beg for it to happen. Even thought the computer was closed, it was still able to get a message to Michael Cole. John Cena and Seth Rollins would face off in a tables match at the TLC PPV. If Cena loses, he’ll lose his number one contender status. I only wondered why.

So Cena’s team wins the Survivor Series and instead of the Authority treating him badly, the anonymous GM does. Maybe the writing team doesn’t know how to write the match-maker as a babyface? Cena was put through a table before it was said and done.

Cena, Ziggler, and Ryback would face Kane, Rollins, and Luke Haper in a six-man to end the show. Ziggler pinned Harper to win the match. The Big Show and Rowan came down, which ended with Rowan hitting show with the steps. It was payback as Show hit him with the steps to end their short match earlier in the show.

Bray Wyatt, who Vince McMahon specifically named as having a good Raw on Stone Cold Steve Austin’s podcast on the WWE Network, beat R-Truth, which led to Dean Ambrose coming out.

Dean got the upper hand and destroyed Bray’s rocking chair which was sold as a tremendous deal. Bray’s not going to kill Dean with a rocking chair at TLC right?

There was a Tag Team Turmoil match to set up the number one contender’s for the Miz and Damien Mizdow’s tag team titles. New Day (Kofi Kingston and Big E with Xavier Woods in their new gimmick) beat Goldust and Stardust in the first fall. Tyson Kidd and Cesaro beat New Day after Kidd pinned Kofi (this could actually be an excellent match for the PPV). The Usos then beat Kidd and Cesaro and then last team in the match, Adam Rose and the Bunny to win the match. The Usos get the next title match.

By the way, Natalya was with TJ and it might be just me, but it seems like she’s lost some weight and bulk. Either that, or they’re dressing her a bit differently since she’s now more TJ’s valet than current wrestler.

Naomi was watching the match backstage and Miz and Mizdow went up to her. Miz was mesmerized and mentioned twerking. He gave her a card as if he was her way into Hollywood. Um, how about Total Divas, Miz? She accepted the card and also the invisible one from Mizdow.

Later in the show, Miz was commentating on a match between Mizdow and one of the Matadores. After Mizdow won with the figure four, Jimmy Uso came down to the ring and slapped the face off the Miz, telling him to stay away from his wife. This is weird and I don’t like the looks of it.

(By the way, check out the short documentary on the Usos on the WWE Network. It’s a fun look at the team and they just seem like the coolest dudes.)

– Seth Green will host the Slammys next week. I still hate him because he wouldn’t stop messing with E on Entourage.

– Fandango beat Jack Swagger via forfeit as Swagger was tending to Zeb, who was jumped.

– Rusev and Lana were out, but Swagger jumped Rusev and sent him running. I guess we’re just going backward in storylines here.

– The Bella twins lost to AJ and her partner Naomi who the fans chose via the app. I guess she wasn’t freaked out by the Miz or by her husband at all.

– Michael Cole interviewed Paul Heyman via satellite so that we would remember that Brock Lesnar was still champion. He’s scheduled to be part of the Slammy’s Raw, but wasn’t announced as so. Maybe he’ll just surprise everyone and kill Cena and Rollins.

The show seemed to simply just be there so that we had something to watch before the Stone Cold Podcast with Vince McMahon. Next week’s Raw also seemed way more enticing than this one.