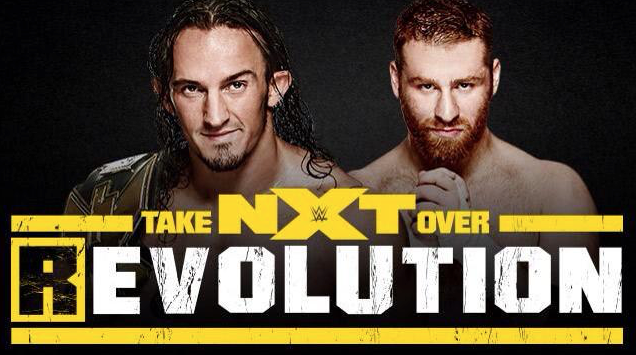 We get another weird name with NXT Takeover REvolution, but hey, when it’s one of the better WWE wrestling shows of the year, they can call it whatever they want.

Owens immediately destroyed Parker, annunciating it with a flip dive over the top rope landing right on his ass on the ramp. Parker hit him with a palm strike in the face and busted him up. Owens beat him with a powerbomb. Pretty cool debut.

Corey Graves is on the announcing team and said that he’s not wrestling because of concussions, but is joining the announce team. It sounded like retirement.

2. The Lucha Dragons Vs The Vaudevillains

It wasn’t a very long match. The heat was on Sin Cara for just about the whole match until Kalisto tagged in and hit the Salida del Sol on Aiden English for the win.

The crowd was doing the counting gimmick for Corbin, but petered out. Corbin did the Vinnie Vegas act with the snake eyes and the big boot until hitting his finisher which is like a fallaway Rock Bottom/downward spiral.

Bull Dempsey was in the crowd. They had a low key stare down.

4. The Ascension Vs Hideo Itami and Finn Balor

It tried to build like an old school tag match where there was tons of heat on the babyface, but it was boring. Itami had to sell forever and didn’t get any offense really. He finally made the hot tag and the fans were into Balor. The finish was the double diving footstop from the top rope. It wasn’t quite in sync.

Roman Reigns was interviewed by Rene Young. Reigns said he wanted to be the first WWE NXT alumnus to win the WWE World Heavyweight championship.

Sasha Banks is actually a pretty decent heel. She was able to get the fans to feel sympathy on the much bigger and athletic Charlotte. As in, it’s kind of hard to believe that Sasha could beat Charlotte in real life, but Sasha is good enough to make it feasible.

Charlotte went for the Figure Four and Banks rolled her up. She’s frustrated that she can’t beat her.

Charlotte went to the top for a moonsault and landed on her feet and immediately did a senton on Banks who moved. Charlotte tried for a Razor’s Edge, but Sasha slipped out and pushed her into the buckle. Banks tried to superplex her, but Charlotte knocked her down and then hit the Natural Selection from the top rope.

That was my favorite match on the show so far.

The match started out a bit slowly, but man it sure picked up quickly. Zayn was on fire here with his offense and the crowd was clearly behind him. He plays the underdog babyface about as well as Daniel Bryan does.

Zayn got his knees up on Neville’s Red Arrow attempt. Zayn locked in a Coji Clutch and Neville got the ropes. There was a referee bump after Zayn kicked out of Neville’s pinfall. Zayn was trying to get the referee back into the match, but Neville hit a super kick and then a reverse frankensteiner for the two count.

Neville rolled out of the ring. Zayn ran from one side of the ring toward the post and dove through the middle and bottom rope for a swinging DDT. That was sweet as all hell. Zayn went for the big boot in the corner, but Neville pulled the referee in front of him. Neville tossed the belt into the ring. Zayn picked it up like he was thinking about using it on Neville. Neville rolled him up for a two count. Zayn finally hit the kick in the corner for the win.

Zayn’s the new NXT champ. The match was really good. I could’ve done without the ref bumps and I’m not sure they really needed them.

I'm now crying watching my best friends wrestle on such a big stage. @iLikeSamiZayn and @WWENeville tore the house down. #Crying #NXT

The babyfaces came into the ring to celebrate with Zayn like this was the end of WrestleMania X. Owens hugged him and looked to be crying.

Zayn stuck out his hand so Neville could shake it. Neville kicked it away and gave him a hug.

After the show was over and about to go off-air, Owens hugged him again and then power bombed him against the side of the ring. William Regal came out and asked for the doctor to come out. There’s you feud and it should be pretty damn great.