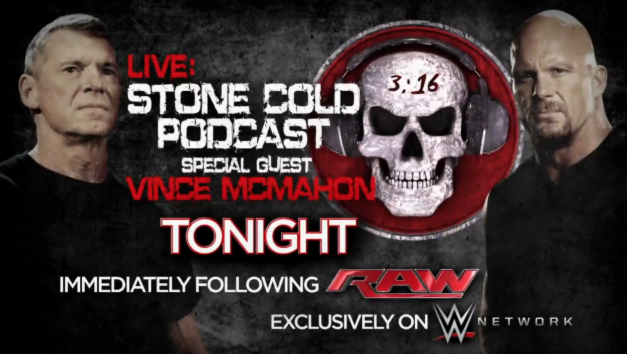 We’re recapping the Stone Cold Podcast with Vince McMahon as it happens.

Stone Cold started out asking Vince about the network and Vince said it was doing great, said subscriptions were good, and talked about the customer satisfaction rating.

Vince and Steve argued pro wrestling vs sports entertainment. Vince says they’re telling stories and reminded Austin that he played the guitar on air. Austin says when he was in the ring, he wrestled. Vince said pro wrestling was what his dad did.

Austin says there’s a different feel in the locker room from when he wrestled. There aren’t any options. He says wrestlers backstage are walking on egg shells because there’s no where else to go. Vince said, we’ll, just don’t piss anyone off. He said no one has grabbed the brass ring since John Cena. He said there are guys who want to. He also said the locker room wasn’t as ambitious. No one wants to fail. There’s a feeling and insecurity that if you fail, you’re exposed.

Austin says they need more depth and Vince agreed. He asked Vince what he’s looking for to get to the top. Vince wants charisma, heart, someone who works hard, and passion, along with physical and verbal skills.

He asked Vince about Cesaro. Vince says Cesaro is missing, “it.” But he also thinks he’ll get there. He needs more charisma, better verbal skills and questioned if it was his European style.

How did the process get so complicated with as many writers as there are. Vince says you need to change with the times. No one man has the answers to all the creativity. It grew into an extraordinary organization.

Austin asked Vince what happened to his son Shane and Vince said he’s busy working hard and spending time with his family. Vince says family businesses are difficult. He does what’s right for business. He wanted Shane and Stephanie to do what they wanted to do, but didn’t push them into the business.

Vince tells the story of how he got into the business which stemmed from his dad’s announcer wanting a raise and Vince replacing him.

Austin asked him if he wanted to talk to CM Punk. Vince says he wants to apologize for firing Punk on the day he got married and he says it was coincidence. He doesn’t want to air dirty laundry and hopes that one day they can get back together again. He looks at previous relationships that hard hard times like with Austin, Hogan, and Warrior. One day, he hopes they get back together.

Vince didn’t listen to the Punk interview. Vince says it’s his point of view and there’s always two sides to the story.

Austin tells the story of when he walked out. Vince says Austin was so hard-headed it was not to be believed. Vince says Austin would hate the creative, but not be able to explain. Austin says that Vince called him after he walked out a few times, but never returned Vince’s phone calls. He says that Jim Ross helped them get back in touch and they straightened things out.

He asks if there’s a guy like Jim Ross to bridge the communication between Vince and Punk like Ross did with he and Vince. Vince says no and if there was, maybe he’d still be with them.

Vince says that he sees Punk and Austin as different from a business standpoint. Vince says he can be introverted and shy himself, so he understands. He was uncomfortable at his wife’s political events.

Austin asks why Lesnar isn’t on TV more and Vince says it’s because he’s a special attraction. He said that Brock beating up half the babyface roster wouldn’t be good because who is left?

Austin asked if they’ll see Randy Savage in the Hall of Fame and Vince says yes and soon. He’s not sure if it’s this year, but will be soon.

Austin asks what Sting’s role is going to be. Vince says you don’t need to see him a lot. He said he’d be surprised if he doesn’t show up at WrestleMania.

Vince says Sting and Brock are not there all the time partly because of contracts, but also because of a change in times.

Austin asks about putting the territories out of business. Vince said they put themselves out of business and said it was like, “Bret screwed Bret.” He mentions talking to Verne Gagne about buying out the AWA. He said he didn’t have money, but he had grapefruits. They all had vast resources, but they didn’t invest in their business. He said everyone got out to save their money except Bill Watts. He said Jim Crockett wasn’t the brightest branch on the tree.

Vince says they are competing with every entertainment.

Austin asks Vince if there’s heat with Jim Ross. Vince says no, but mentions the incident at SummerSlam in 2013, but doesn’t mention Ric Flair’s part of that. He said Jim was unprofessional. Austin says Jim is one of the brightest wrestling minds and compared his wrestling mind to Vince’s. Vince said JR worked very hard, but wanted to go back to Oklahoma and says you can’t do it unless you’re all in 24/7. He basically made it sound like JR didn’t want to be part of the business as he was anymore.

Austin asked him why their chemistry in the ring was so good. Vince says that he understood Austin’s character. He grew up in a trailer park. He thinks WWE’s audience is Americana and the common man. He understands how people think. If anyone pretended they were better than Vince, as a child, it made him angry. His philosophy was that no one was better than him. On the inside, he was Stone Cold Steve Austin and understands the psychology, so he knew how to play the character that he would hate.

Vince called the audible to go an extra 15 minutes. Vince made fun of Austin’s working punch and Austin made fun of his coordination. Austin asks Vince about his dream of being in the ring. Vince says it was one of the greatest thrills. He always wanted to be there so badly and it was a dream come true.

Austin talks about the double turn with Bret Hart at WrestleMania 13 and Bret gigging him even though WWE had a no-blood policy. Vince said he was upset at the blood, but after listening to the audience, he was okay with it because it’s what the audience wanted.

Austin asks Vince about the future. Vince says he thinks it’s good. Austin asks him about matches these days and wonders why they are so segmented. Vince says it’s because of short attention spans. He said people tune in and tune out constantly.

He asks how people can let Vince know what they want. Vince said he listens to the audience.

Austin asks him when he’s going to ride off in the sunset. Vince says he’s healthy, he enjoys it, and he doesn’t think he’s lost a step. Austin hopes they can do it again and it ends in a handshake.