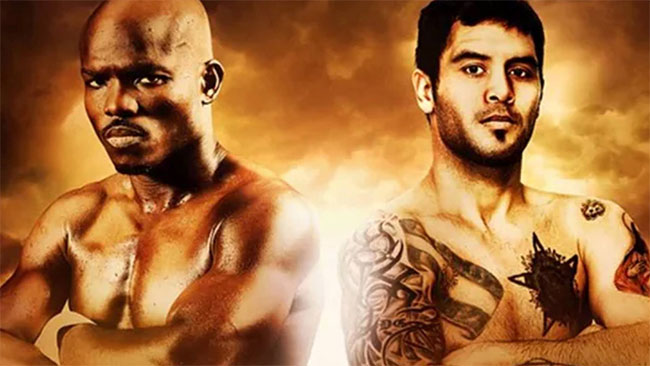 Saturday night was fight night with a UFC card, a World Series of Fighting card, a Showtime card, and an HBO card. We’re covering Timothy Bradley vs Diego Chaves.

We were able to cover two out of the four big events tonight. If you missed UFC On Fox, we covered it. Amir Khan dominated Devon Alexander. And for you World Series Of Fighting fans, Rousimar Palhares destroyed Jon Fitch’s knee.

Now that you’re all caught up, it’s time for Timothy Bradley vs Diego Chaves.

Bradley showed good movement in the round, moving in and out while landing some nice body shots. Chaves was looking to load up on the right hand, but Bradley’s right hand was more successful. He landed a great overhand right that woke Chaves up a bit.

Both guys were looking to land big shots. They clashed heads and Bradley got the worst of it underneath his eye. They clashed again and Chaves has a bump over his right eye. It’s now swollen underneath Bradley’s left eye. Chaves landed a nice jab that caught Bradley’s attention. He’s still not able to land the right hand.

Bradley did much more moving in that round. He didn’t allow Chaves to sit on anything and punch. He landed another big overhand right.

There was lots of fighting inside with hooking and uppercuts. Chaves is getting the worst of it, but at least Bradley’s more of a sitting target for him. But Bradley is hitting him far harder than Chaves is hitting him. So far, I have a shutout for Bradley.

The were fighting on the inside again for more than half the round, but then they stepped away and both started jabbing. Chaves partially landed a right hand and Bradley threw a wild right hand and followed through with it like a pitcher would after throwing a pitch. He kind of looked at it over his shoulder.

This was probably the round with the least action so far. Chaves fell after a jab to the body and it was called a slip and not a knockdown. If Chaves won a round, that one was it.

It was another good round for Chaves, but Bradley was more active and landed more punches. Though, Bradley might be slightly on cruise control. Even Joel Diaz is trying to get Bradley to wake up.

This round was more like the first two. Bradley was in and out and was moving all over the place. He landed a right hand and then would be out of there before Chaves could answer. That was Bradley’s best round in a while.

Chaves ended the round well after he caught Bradley off-guard, but he just didn’t hit him enough to steal the round. His corner is telling him to win the last three rounds to win the fight, but I’d find it hard to believe that any judge has Bradley losing more than two or three rounds so far.

This wasn’t a great action round. Bradley stayed outside throwing one shot at a time. Chaves couldn’t really get to him to make it interesting. Close round, but only because Bradley took it easy in the round.

This was another close round and it’s possible Chaves took it. Bradley looks kind of disinterested. Maybe he figured he couldn’t knock him out earlier in the fight and decided to cruise.

Bradley had more pep in his step in the round, but it was still just a round for him. It’s quite possible that Chaves won some of the last four rounds on the judges’ scorecards. Chaves raised his hands before the round was over as if he was celebrating.

I can’t see Diego Chaves winning eight rounds at all. That judge was Harold Lederman’s daughter who Jim Lampley won’t rip on television.