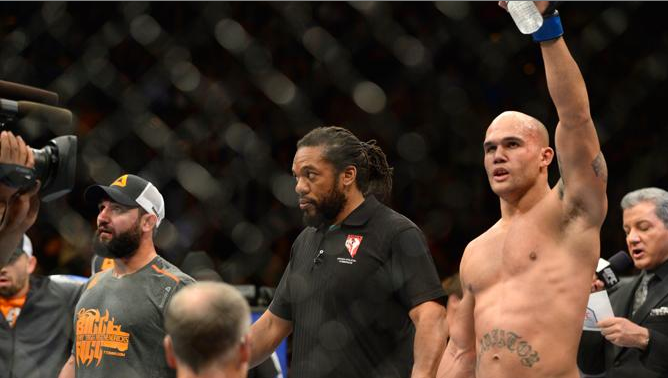 Welcome to the last awards for 2014, the MMA Awards

Participating in the awards are FGB writers Duan, Alan, and GG as well as Alex Goff from Online World Of Wrestling, Premier Wrestling president John LaRocca, and Heidi Fang from The Fight Corner.

Duan: Robbie Lawler
Two years ago when Lawler joined UFC following Strikeforce’s closure, another title win seemed inconceivable. Now after going 6-1 back in the big leagues, he finishes 2014 on top of one of the marquee divisions in the sport’s premier promotion. He went through hell and back this year to get there, but it marks arguably the biggest career turnaround in MMA history.

Alex: Robbie Lawler
I almost picked Donald Cerrone. Lawler lost his first fight of the year but went on to win 3 in-a-row including avenging his first loss of the year against Johny Hendricks and in that fight, he won the belt.

John: Robbie Lawler
Though his year started out with a loss to Johny Hendricks at UFC 171 for the UFC Welterweight Championship, the “Ruthless” one came back quickly to the cage and got back on the winning track with a TKO over the always tough Jake Ellenberger at UFC 173. Lawler made another quick turn around, defeating Matt Brown at the July UFC On Fox event in one of the best fights of 2014. Finally, Lawler ended 2014 by winning the UFC Welterweight Title at UFC 181 defeating Johnny Hendricks in a classic title bout.

Heidi: TJ Dillashaw and Robbie Lawler
I couldn’t just pick one. It’s undeniable that Dillashaw was able to do what nobody expected him to when he captured UFC gold, defeating the reigning champ, Renan Barao. He successfully defended that title when he handed Joe Soto a loss as well. Though many hadn’t heard of Soto, he was a former Bellator champion as well as a replacement who had stepped in on 24 hours notice. In accomplishing both feats, Dillashaw proved that he was not only an elite fighter, but capable of working past adversity also.

Lawler, without a doubt, has become the embodiment of the expression hard work pays off. After coming into the sport at a young age, a much more matured and focused Lawler got back to having fun in 2014. Despite his loss for the vacant welterweight title to Johny Hendricks at UFC 171, Lawler rebounded with back-to-back wins over Jake Ellenberger and Matt Brown to edge out the other contenders. All of that momentum put “Ruthless” back in line for a shot at Hendricks at UFC 181 where he finally claimed the belt, marking the pinnacle of achievements in his 13-year MMA career.

GG: Robbie Lawler
Even though I actually thought he lost the fight in which he won the welterweight strap from Johny Hendricks, you can’t discount everything he’s done to get to where he is today. He’s a throwback fighter who changed his game enough to become better as he got older, which rarely happens in this sport. You could go with TJ Dillashaw here as well and be fine, but I think Lawler avenging his loss and getting two wins over excellent contenders in between cinches it for me. 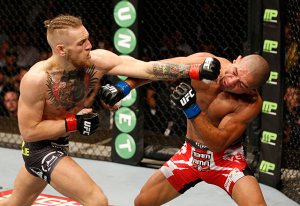 The feel good show of the year. The crowd was dynamite, the fights were excellent, and all the guys who needed to produce big performances did. The starring role played by Mcgregor both in the main event as well as the post fight interview put the exclamation point on a massive Dublin fight night.

Alan: UFC Fight Night Dublin
An electric atmosphere from start to finish. The fights wouldn’t have been anything special on any other show, but here they made them special.

Alex: UFC 178
While the main event was not an interesting matchup (Mighty Mouse had an awesome performance), the undercard was amazing.

John: UFC 181
This event had it all – huge title fights and a blockbuster announcement of CM Punk singing a UFC contract. With so many shows, the UFC events have become over-exposed. It has been awhile since a show felt special and UFC 181 was that.

Heidi: UFC 172
Some may argue that there were cards with more astounding main events, but in the end, this card had it all. Jon Jones again flaunted his dominance as champion when he handed Glover Teixeira his first defeat in 8 years. Submissions were aplenty and dazzling from Luke Rockhold’s finish of Tim Boetsch, Joe Benavidez’s impressive guillotine over Tim Elliott, to Jim Miller putting Yancy Medeiros to sleep. Lest not forget, the pinpoint precision with which Chris Beal landed a flying knee on Patrick Williams to start the show. Danny Castillo also stunned Charlie Brenneman with a brutal punch that put him out in the 2nd round.

GG: UFC 175
I may be biased since I was there live, but hey, I was due for a great show after seeing some Las Vegas stinkers over the years. The main event was a brutal war with Chris Weidman and Lyoto Machida slugging it out like they were Balboa and Creed, but the main thing I’ll take away from that show is the whirlwind of Ronda Rousey’s entrance, quick and decisive victory over Alexis Davis, and the insane crowd reaction of people thinking she was the next Mike Tyson. I’ve been to a lot of MMA shows before and have seen many great moments. That moment was great in a much different way. 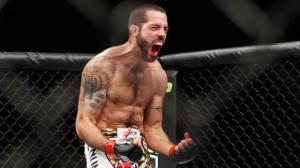 A fight that more than lived up to it’s billing. Both Matt Brown and Erick Silva are always involved in great tear-ups and this one was every bit the battle you would expect. A classic slugfest. Neither of these guys will likely ever be title level fighters, but my god, they’re fun to have around.

Alan: Erick Silva Vs Matt Brown – May 10, 2014
It was a great back and forth war. Tactics be damned, these guys just went for it.

Alex: Chris Weidman Vs Lyoto Machida – July 5, 2014
This fight was an incredible war. Machida is known for not taking a lot of damage and decided to let everything fly into the wind in an attempt to win the middleweight championship. He was unsuccessful, but both men raised their stock after this fight.

Heidi: Johny Hendricks vs. Robbie Lawler I – March 15, 2014
Whether it was technically executed or not, there was no other slugfest as captivating in 2014. The two swung for the fences. Hendricks did battle with a bicep injury, Lawler thwarted nearly every takedown attempted by the Oklahoma State University wrestler, but it came down to one in the fifth round that Hendricks’ nabbed which turned the tables in his favor. Hendricks took the unanimous decision and the belt home.

GG: Erick Silva Vs Matt Brown – May 10, 2014
I was live at two of Dana White’s top 6 fights of the year, but chose neither. While Weidman/Machida and Brown/Lawler were both absolute tremendous back and forth battles, it’s more fulfilling when the fight ends decisively. Matt Brown reminded me of Scott Smith is his ability to look down and out and come back ferociously.

Duan: Conor McGregor
This could have been a daunting year for Mcgregor. After spending the first half of it on the shelf with injury, he came straight back to take on the two toughest opponents of his career consecutively and he came through both tests with ease. Conor has made himself a genuine star in the division. His Dublin homecoming was massive, and as long as he keeps winning, his name is only going to keep getting bigger.

Alan: Conor McGregor
Talk about making an impact. Conor made himself one of the biggest names in the company in a few short months.

Alex: Conor McGregor
Conor became a star with no real television exposure. Conor is headlining his next show and we may find him challenging for a belt in 2015. INCREDIBLE!

John: Conor McGregor
With his charisma and promo ability, McGregor has made a name for himself. So far he backed up his talk with wins over Diego Brandao in July and Dustin Proirer at UFC 178. 2015, I believe will be a big year for him. With no more Chael Sonnen in the UFC, Conor McGregor will help pick up the slack when it comes to work on the mic. 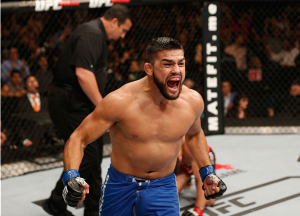 His rise may not have been meteoric, but the TUF 17 winner, who has been counted out from the very start of his UFC career, time and time again proves the doubters wrong. This year he snatched up 3 victories, cracked into the UFC’s top 15 welterweights and remains undefeated. His signature win at UFC 180 over Jake Ellenberger earned him his first post-fight bonus award as well.

GG: TJ Dillashaw
I completely underestimated Dillashaw, not giving him a single chance of defeating Renan Barao. For that, I apologize to TJ Dillashaw.

Duan: Kyoji Horiguchi
Japanese MMA needs a new star and so too does the flyweight division. Horiguchi could be both. The 24-year old is already 3-0 in UFC. He’s exciting, he finishes fights and he’s ready for the step up. His quick knockout in Saitama in September was one of the great moments of last year. He’s back out again on the main card of Jones/Cormier and that’s a big showcase opportunity for him.

Alan: Rory MacDonald
CM… wait, no probably not. I’m going to go with Rory McDonald. Yes, he’s already very much established but I think this is the year where it all finally clicks for him and he starts to dominate. He’ll be the welterweight champ in 2015. 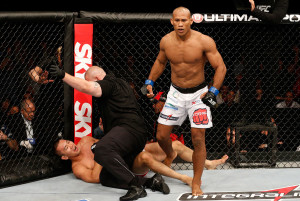 Jacare is one of the best Jiu Jitsu athletes of all-time. So I am biased. I think Jacare beats Yoel Romero and Chris Weidman this year and will be the 2015 fighter of the year. I am biased!

Heidi: Conor McGregor
The next big thing is already here. If UFC Featherweight Conor McGregor can continue to back his trash talk with impressive wins, it’s not far off the mark to say that he’ll be ready for a title shot in 2015.

GG: Conor McGregor
I’m not about to crown Conor just yet. If he can prove that he can beat a wrestler, he’ll be close to unstoppable. Can he beat Jose Aldo? That’s a tougher question.