Welcome to our 2014 FGB Awards, the boxing edition!

Participating in the awards are FGB writers Duan and GG as well as Alex Goff from Online World Of Wrestling and Robert Silva from the World Championship Boxing podcast.

Boxer of the Year

Duan: Sergey Kovalev
The difference between Kovalev and the year’s other standout fighters is that he got the type of signature win that sets him apart. The big punching Russian had already shown that he could wipe out real solid contenders, but his complete domination of Bernard Hopkins in November put him on another level. He made it look easy and that’s something that has just doesn’t happen in Hopkins fight. The 31-year old has what it takes to lead the light heavyweight division for a long time more.

Alex: Sergey Kovalev
He finally got a name to fight him. The legend Bernard Hopkins stepped to the plate and Sergey dispatched of him in a lopsided decision. The Krusher is the man in the light heavyweight division and seems to be in the driver’s seat of the division securing a fight against Jean Pascal early in 2015. Adonis Stevenson seemingly feel asleep at the wheel and may have lost bargaining power against the Krusher.

Robert: Sergey Kovalev
In 2014, Kovalev won three fights, all in convincing and dominating fashion. Officially, he lost just one round combined in those three fights. While his knockouts of Cedric Agnew and Blake Caparello were nothing to write home about, his total domination on November 8th in Atlantic City over the legendary Bernard Hopkins was one of the greatest performances in the history of the Light Heavyweight division. Kovalev put on the quintessential virtuoso performance, dropping the granite chinned Hopkins in the opening stanza, then completely beat him to the punch, battering him in the 12th round from pillar to post. All that is left for Kovalev to do is to face and defeat the reigning Ring champion, Adonis Stevenson. Look for that fight to occur in 2015. Look for Kovalev to destroy the china-chinned Stevenson and continue his run as the greatest Light Heavyweight since Roy Jones, Jr.

GG: Sergey Kovalev
If you could pick the boxer of the year based on one fight, I might’ve chosen Miguel Cotto for his inspirational beating of Sergio Martinez. You could also pick Terence Crawford who also won three times this year and is a budding HBO star. And you can never go wrong with Gennady Golvkin. But much like Duan, Alex, and Robert have already stated, it has to be Kovalev. This was his year and he put the exclamation point on the end of the sentence with his win over B-Hop.

Duan: Tommy Coyle vs Daniel Brizuela – February 22, 2014
A perfect reminder that the best fights in the sport don’t always come in the most highest profile of match-ups. Sometimes they happen in bouts even the experts overlook. When Coyle/Brizuela was signed, it was seen by most as a potential mismatch, but the eight knockdowns and final round stoppage that followed killed absolutely everything else this year in terms of drama.

Alex: Carl Froch Vs George Groves 2 – May 31, 2014
I loved the Lucas Matthysse Vs John Molina fight (like Robert talked about above). The violence made me happy. But nothing this year was bigger than Groves/Froch.

Robert: Lucas Matthysse Vs John Molina – April 26, 2014
A savage fight. A fight in which for the first 6 rounds, Matthysse was in deep trouble. Matthysse was dropped in rounds 2 and 5, and suffered a severe cut due to a clash of heads in round 3. However, Matthysse showed his true heart and intestinal fortitude, and began turning the tables during the middle rounds. The last three rounds of the fight, rounds 8-10, showed Matthysse beat the living hell out of Molina, knocking him down in the 8th and finally again in the 10th, when the referee Pat Russell didn’t even bother counting. Matthysse saved his career with this heart wrenching victory, while Molina will continue as a stepping stone for fighters in the 140 pound class.

GG: Terence Crawford Vs Yuriorkis Gamboa – June 28, 2014
You could simply watch the highlights of this fight and see why it was so special. It also showed that Crawford was someone to pay attention to. He absolutely took it to Gamboa, knocking him down twice before being stung himself. He showed an ability to take a shot and get right back in there and continue pressing, putting Gamboa down twice more in the ninth and final round for the TKO.

Duan: Carl Frampton
The Belfast boy won his first world title and in the process packed out his first outdoor arena show back in September making him the biggest star attraction and ticket-seller from any of the lighter weight classes. He’s the guy that everybody, not just at 122, but 118 and 126 as well, will be gunning for next year. There are some huge fights out there for him. What happens next is going to be very, very interesting.

Alex: Gennady Golovkin
GGG may finally get some names to fight him. He drew a big crowd to the Stub Hub Center and now he may be able to get some of those big names to actually send the contracts back 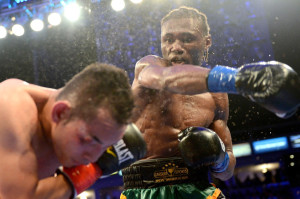 I predict 126-pound star Nicholas Walters will be the best fighter pound for pound within the next two years. He has a battering ram jab, a hellacious right cross, and a left hook from hell. In 2014, he destroyed two future Hall of Famers, Vic Darchinyan and Nonito Donaire. While Darchinyan is past his prime, Donaire is in his prime. It was no contest, as the Axe Man obliterated Donaire with his cannon jab, and in the sixth, put the all-time great asleep with a picture perfect right cross. Walters is a miniature Thomas Hearns, and in 2015 I predict he will continue to destroy and dominate every fighter he faces in the ring.

GG: Terence Crawford
HBO has guys like Gennady Golovkin, Sergey Kovalev, and now Canelo Alvarez as their go-to guys. But they also showcased Crawford who was on a segment of Jim Lampley’s The Fight Game (which he had to steal from us), being interviewed by Michelle Beadle. They talked about him fighting in Omaha and he really came off as someone who could possibly grow into a star. I think he’ll have to eventually get to 140 pounds to do so, but he might just have it. 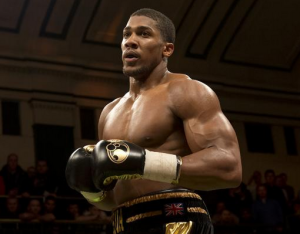 Joshua is the heavyweight star everybody has been waiting on. He’s 10-0 with 10 knockouts in his first year as a pro. The gold medalist has the size, he has the skill and he has the power. He’s charismatic, he’s exciting, but he’s also very likable and he has a buzz behind him. All the ingredients are there for him to have a massive 2015.

Alex: Deontay Wilder
I wanted to say Vasyl Lomachenko, but if America really wants a marketable heavyweight they may have it in Wilder. Wilder will attempt to win a belt at the MGM next year on Showtime and if he does, he may have a full force marketing machine behind him. We may not know a lot of the challengers, but there is already talk of a Antonio Tarver fight in the future.

GG: Nicholas Walters
I’m so glad that Robert talked about Walters earlier. The featherweight division is one that has been promoted well in the past and with Walters’ waxing of Nonito Donaire, he’s ready to on the big stage. I mentioned to Duan in our boxing year in review podcast if it was too early for Walters and Vasyl Lomachenko in 2015. How amazing would that fight be?

The Greatest Fights Of All-Time: 18. Archie Moore Vs Yvon Durelle I

The Greatest Fights Of All-Time: 19. Roberto Durán Vs Iran Barkley

The Greatest Fights Of All-Time: 20. Larry Holmes Vs Kenny Norton