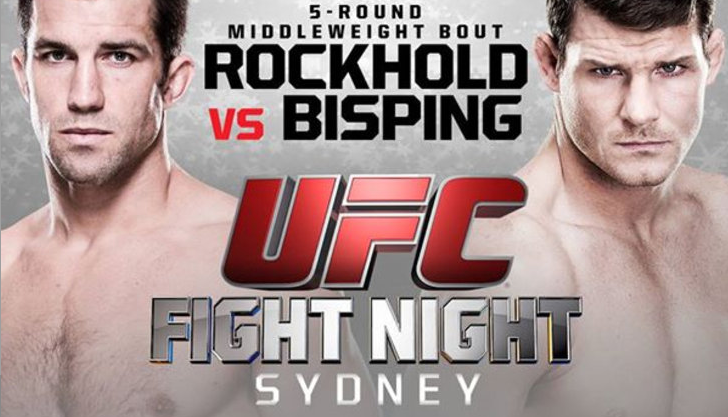 How about a big grudge fight on a Friday night?

We don’t normally preview smaller UFC shows, but this UFC Fight Night only available on Fight Pass is not your normal small show. Thanks to Michael Bisping, this show feels a little more special.

We’re only previewing the main event between Michael Bisping and Luke Rockhold, but we’ll also predict the rest of the main card fights.

All year, we’ve been keeping track of our picks for most of the UFC main card fights. We’ve added this one to our picks. In addition to the FGB crew, included in our picks are John LaRocca, president of Premier Wrestling, Heidi Fang from MMA Fight Corner, and Alex Goff from Online World Of Wrestling.

Duan isn’t letting go of that first place spot. Or so he says.

Duan: Luke Rockhold by decision
When I watched Bisping lose to Tim Kennedy back in April, I thought what I saw was a fighter who was done as a top 10 level talent – not shot or completely gone – just past his best and missing a vital ingredient that had always been there in the past. My opinion hasn’t greatly shifted since then.

The Cung Le bout was probably more a mirage than anything – an oponent so faded that it masked Bisping’s own decline and magnified the attributes he has left. Rockhold will be a different story. He’s still someone who belongs in the contenders’ circle, someone who still has ambition and someone who is still close to his peak. Unfortunately for The Count, I think that’s enough to pull Rockhold just above his reach.

John: Luke Rockhold
This a big fight for both fighters. If Bisping loses, this is the final nail in the coffin for his title shot dreams. Bisping has been close to getting a little shot so many times, but he either loses the fight that could get him the shot or he is bypassed for some reason. I am going with another loss for Bisping here. Rockhold seems really focused in destroying Bisping and making a statement. He seems dialed in and that is why I going with him. You can never count the scrappy Bisping out, but Rockwell gets my pick.

Heidi: Luke Rockhold by 1st round TKO
I’m going with a TKO because Rockhold wants to punish Bisping. Therefore, it’s my belief he won’t go with a liver kick to drop the Count, though he could resort to it if plan A isn’t there.

Alex: Luke Rockhold by 3rd round TKO
Mike Bisping is one of the saddest stories in UFC history. During Anderson Silva’s dominant title reign he beat some men who weren’t deserving of stepping in there with him. It is frustrating to me that Thales Leites and Patrick Cote got shots while Mike Bisping never did. He took his career into his own hands and talked and performed his way into becoming a recognizable name. He wasn’t ever the best, but he was always a solid fighter. Now he is a fighter who is falling apart and I think Luke Rockhold will have a fairly easy time defeating Mike.

Jim: Luke Rockhold by decision
For me this is the classic story of an older gatekeeper in Michael Bisping trying to c*** block a younger contender in Luke Rockhold. I think this will be a long frustrating fight for Bisping and will highlight that he will likely never hold a UFC title that many once believed he had a legit shot at winning. I predict Rockhold will use his strength and wrestling to stymie Bisping at close quarters for much of this fight. Michael will once again prove his durability and weather the proverbial storm, but this fight will likely not be pretty to watch.

GG: Luke Rockhold by 2nd round TKO
My pick has more to do with the belief that Bisping isn’t 100% and with that eye of his, is probably not ever going to be 100%. You can fight a guy with eroding skills like Cung Le with a bad eye, but Rockhold will go for broke and I think they’ll have to stop the fight some point in the second.