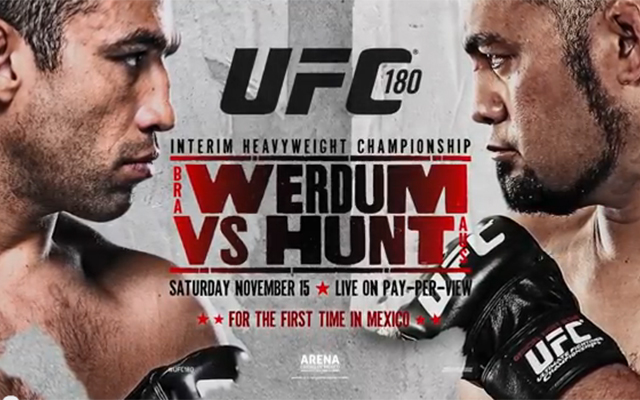 With Cain Velasquez and Diego Sanchez off the show, UFC 180 isn’t quite what they planned.

But it doesn’t mean it won’t be a good show. It just means that it won’t be as big and important to the casual UFC fan. And that’s also without mentioning that Bellator has one of their biggest shows to date at the same time and on regular cable.

All year, we’ve been keeping track of our picks for most of the UFC main card fights. In addition to the FGB crew, included in our picks are John LaRocca, president of Premier Wrestling, Heidi Fang from MMA Fight Corner, and Alex Goff from Online World Of Wrestling.

We’re only previewing the main event between Fabricio Werdum and Mark Hunt, but we’ll also predict the rest of the main card fights.

Duan and Jim keep the top spot, while GG is trying to creep up ever so slowly.

Duan: Fabricio Werdum by way of 3rd round submission
I would love for Mark Hunt to become the interim UFC champion. It would complete arguably the biggest career turnaround in the sport’s history. This is a guy who joined UFC on the back of a five fight losing streak. What a story it would be for him to win a title, interim or not. Unfortunately though, even when Mark is at his best, I think there are heavyweights out-there that are just a skill level above him, and I think there are heavyweights out-there that are just plain old bad matchups for him. Werdum, being honest, is probably both. As if that wasn’t enough, the deck is stacked against Hunt here too. This is a five round fight at altitude that he’s taking on short notice. There is no possible way his preparation could be 100%. You always have to give him the puncher’s chance early, but he will have a very narrow window to find that punch in this one. Once we hit the end of round one, it’s Werdum’s to lose.

John: Fabricio Werdum by way of submission
Nothing would make me happier then to see Mark Hunt complete one of the greatest comeback stories in MMA by winning the interim-UFC Heavyweight championship. Sadly, that will not happen. The short notice and tough weight cut will be too much for Hunt. He has a puncher’s chance, but I see Werdum winning by submission over a tired Hunt. Everyone is talking about Hunt and his puncher’s chance, but don’t sleep on Werdum’s striking. He’s greatly improved in that skill set. Still, the best bet for the BJJ master is to take Hunt down and tire him out and stay away from that big right hand.

Heidi: Fabricio Werdum by way of 4th round submission
Mark Hunt has unbelievable power and cannot be denied a puncher’s chance. When assessing the ground game, what kind of role the altitude can play on cardio and the fact that Werdum has had a full camp, I have to take the man who finished Fedor. Also considering six of Hunt’s losses have come by way of submission, stylistically this all bodes well for Werdum.

Alex: Fabricio Werdum by way of 4th round TKO
Fabricio Werdum was the man who welcomed Junior Dos Santos into the octagon. After that fight, it appeared that Werdum had passed the torch on to the Dos Santos. Werdum was cut from the UFC and popped back up in Strikeforce. The highly accomplished Jiu Jitsu fighter picked up a couple of wins before facing the legend Fedor Emelianenko. There, Werdum pulled off what many thought was impossible and defeated him. Fedor’s previous loss was a blood stoppage, which he later avenged. Mark Hunt is an amazing story as well, but after this Saturday night, Fabricio Werdum will be your interim Heavyweight Champion. He went from stepping stone to throwing stones.

Jim: Fabricio Werdum by way of submission
Mark Hunt is always fun to watch and he always comes to get the job done. In this match up he’s up against a guy that has had a full training camp, possesses superior grappling skills, and has better conditioning. I think all that will be too much for Big Mark to overcome. If Werdum can avoid the big power shot he should be able to get in on Hunt and take this fight to the ground, taking away Hunt’s biggest strength and exposing his biggest weakness. I hope I get this one wrong. I’d love to see Mark win this, but I just don’t think this is going to be the night.

GG: Fabricio Werdum by way of 3rd round TKO
I think most will think that Mark Hunt needs to get Werdum early in order to have a chance. Werdum can hold his own on his feet, but doesn’t have hammers for fists like Hunt. I do wonder how early Werdum will get started. Pushing the pace might be a good idea to tire Hunt out. But just allowing Hunt to bring pressure could tire Hunt out too. All that being said, I think we’ll see Werdum simply outlast Hunt and stop him.