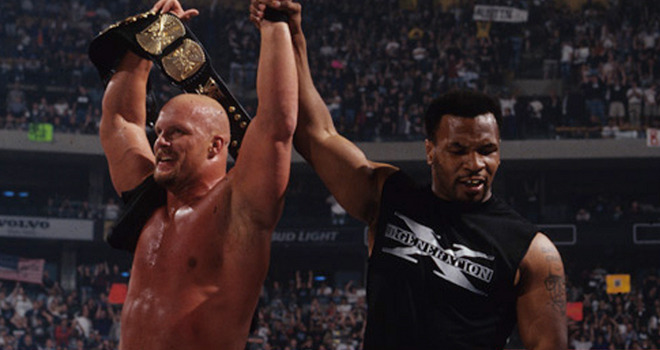 We are in the stretch run of a very long Monday Night War series. This episode deals with the mainstream coverage both companies strived to get during the Monday Night Wars.

This was the most interesting episode of the series so far. That’s not to say that it was the most honest or best episode. But the episode didn’t follow the normal pattern that we’re used to. It wasn’t about a specific wrestler or act and while the WWE narrative was in full swing, for the most part, it was valid.

One of things that this episode did is show how uncool current wrestling is. In 1998, one of the most famous athletes decided that he’d be involved in a storyline for WrestleMania XIV. Mike Tyson jumped Stone Cold Steve Austin into the stratosphere which helped WWF surpass WCW in the Monday Night Wars.

Even before then, Dennis Rodman joined the NWO in 1997 and in 1998, he missed practice before game four of the NBA Finals to attend Nitro because of how hot wrestling was (and I’m sure how much they were paying him). Even after that, Eric Bischoff and Hulk Hogan took over the Tonight Show for a segment which led to Jay Leno actually wrestling on PPV (and throwing stereotypical girl punches).

I don’t think Blake Griffin would wrestle on Team Authority or that Jimmy Fallon would tag team with John Cena at a PPV. Well, on second thought, Fallon probably would. And then he’d sing about his tight pants.

But the point is, with WWE seemingly always trying to kiss up to Hollywood these days, wrestling seemed so much more accepted into pop culture around the time of the Monday Night Wars.

Vince McMahon mentioned that in the mid-80s, thanks to the success of Mr. T, Cyndi Lauper, and WrestleMania, they began to be pop culture. I’m not exactly sure Vince said that correctly, but what they did is utilize real celebrities to help make Hulk Hogan as mainstream as possible. Hogan mentioned that when he went to WCW, they immediately added Shaq O’Neal and Mr. T to the Bash at the Beach in 1994 to try and gain some mainstream eye balls. While Mr. T didn’t mean much at all any longer, it showed that WCW was willing to do some of the things that WWF did to gain a bigger audience.

The episode painted the mid-90s of wrestling as a bunch of gimmicks for children and a slow period which it was, but it was more so of a transitional period. If Vince McMahon had Stone Cold Steve Austin in 1995 instead of 1998, he probably wouldn’t have been so gimmick heavy.

From 1996 and on, WWF tried to become a more serious product, recruiting real athletes like Mark Henry, Ken Shamrock, and Kurt Angle. It gave them legitimacy and helped the product look less like a bunch of gimmicks and more like a sport.

The Mike Tyson angle was given a lot of time in the episode and for good reason. I still think the Tyson vs Austin segment on Raw is the greatest television segment WWF has ever done. Bret Hart said that Tyson’s people talked to WCW first, but Eric Bischoff didn’t think they needed him. I think it was more so that Bischoff didn’t want to spend the money for him.

Paul Heyman said that he knew the Monday Night War was over when Tyson showed up on WWF TV. WWE was along for the ride. Tyson said he was addicted to chaos and that’s what it was. John Cena called it the turning point of the war.

While it’s easy to think that WWF won the Monday Night War after WrestleMania XIV, that wasn’t necessarily the case and they discussed that on this episode. In a series in which WWF is portrayed as the underdog and babyface, it was nice to see that they actually told the truth, even if WCW’s ratings win didn’t last very long. After the Dennis Rodman and Jay Leno angles, WCW actually caught up and surpassed WWF in the ratings for a short time. As a huge basketball fan, I loved seeing Rodman and Karl Malone face-off against each other. It was almost as if real sports decided that wrestling was cool enough.

But when it came to Jay Leno, let’s just say that they jumped the shark. Arn Anderson called it prostitution. While all the publicity helped WCW’s rating, it hurt in the long run. CM Punk said he was embarrassed to be a wrestling fan because of it.

Soon there after, WWF was back in control, winning the war and becoming a piece of, as Vince McMahon would say, Americana. They were on MTV as part of Celebrity Death Match. They had a Super Bowl commercial. Arnold Schwarzenegger was on Smackdown pimping his latest movie. Rock hosted Saturday Night Live. And most importantly, the company went public. And no, Vince McMahon didn’t get to go on David Letterman again.

While WWF became the dandy of entertainment for a short while, WCW was on their way down and choking themselves with their own hands. Discussed was the Ready To Rumble movie and how WCW was involved with a movie that died a death. And to add insult to injury, Vince Russo then thought it was a good idea to take the lead actor from that flop of a movie and make him WCW champion. Really, they could’ve ended there. But no, Russo then defended his choice to make Arquette champion because Arquette’s photo ended up on the cover of the USA Today.

Unfortunately for Russo, it didn’t mean a thing. It’s not like those people who read the USA Today decided to watch wrestling. I’m sure it made them scoff at WCW even more.