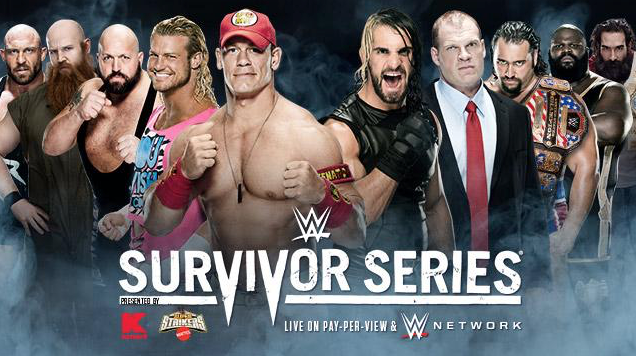 Okay, maybe Team Cena wasn’t set last week like I thought. But this week was the week to make Team Cena official.

Three things were made certain after this week’s Raw. The first thing is that Team Cena is official after one fairly significant change.

But also, we learned that John Cena is either a dick of a team leader who wants the glory for himself or he’s all about tough love. Lastly, it only took a few weeks, but Ryback isn’t special any longer.

The entire Authority plus Team Authority came out and it was all for Triple H to take shots at WCW in trying to describe what Raw without the Authority would become. They introduced Luke Harper as their new member, but still had the hots for Ryback which didn’t make sense because they already had five members. Maybe Kane would step down for Ryback? But Ryback came out to let them know that he’s not on any team other than his own, which could be some forward storytelling for Survivor Series. In order to make sure Ryback wouldn’t join Team Cena, Stephanie reminded Ryback of Cena making fun of him on Raw previously.

The Authority’s plan was to decimate all of the possible Team Cena members so that they couldn’t make it to the last segment of the show which was the contract signing. In the first match, Dolph Ziggler tried as he might, but couldn’t beat Luke Harper and thus lost his Intercontinental title. Of course, it wasn’t fair as Seth Rollins hit him with the briefcase to start the match. Ziggler kicked out of nearly everything but couldn’t overcome the big man and then had to eat a curb stomp from Rollins after the match. Where was John Cena?

Ryback faced Cesaro in a long match that was pretty decent for Ryback standards but not really for Cesaro standards. It was much too long. It was the wrong opponent. And even though Ryback still won, it wasn’t impressive at all and it seems that the last couple weeks of Raw was all for naught. He should’ve been given Heath Slater to destroy in two minutes. Cena watched the match in the back.

This next segment was pretty mindless. The Big Show came out and Stephanie started to talk about the forgettable original angle in WCW where he was brought in as Andre The Giant’s son. Is Andre really your dad, chico? What she wanted was for Show to agree to leave Team Cena and in return, he’d get to be part of the 2015 Hall Of Fame. Sheamus came out. Steph then booked them in a match against each other and the winner would get a title shot. Not sure why the stipulation was even added. Mark Henry and Rusev both interfered and left Show and Sheamus laying. Where was John Cena?

Cena and Ryback were chatting and when Ryback said he didn’t take kindly to be reminded of the prior Cena insults, Cena insulted him again! What a leader!

At the end of the show, Team Authority came out and Triple H tried to inspire the troops and let them know why they had to win the match. John Cena was the only member of his team that came out and he decided that he would just fight them one on five.

Slowly, but surely Team Cena came out. Ziggler came out even though earlier in the show, it was said that he went to the hospital. Then, the Big Show came out. Next, as a surprise, ROWAN came out and Luke Harper freaked out. Sheamus was declared out earlier, but I figured he’d come back like Ziggler, but no. He’s actually out of the match. Then, Cesaro’s music came out and Team Cena thought they had their fifth member. Why were they so excited? He was the one who lost to Ryback. But he tricked them. It was a Team Authority joke. I don’t think he’s on the team. Finally, Ryback came out and helped Team Cena clear the ring. For some reason (possibly thanks to the match earlier), it didn’t feel like the big setup that it was supposed to.

– Grumpy Cat was the host and had two segments and I fast forwarded through both of them.

– Tyson Kidd made Adam Rose tap out to the Sharpshooter. Rose was upset with The Bunny who went behind him and started humping him. Yep, that’s exactly what happened.

– Bray Wyatt came out and talked about Dean Ambrose’s drunken mother and deadbeat dad. Ambrose came to the ring and they brawled a bit. This was no Chris Jericho and CM Punk build.

– Brie Bella beat her sister. The idea was that Brie had to dress up like AJ Lee so that when Nikki beat her, it would show AJ how it would happen at the PPV. Brie is either the worst assistant or Nikki is the worst boss.

– The Miz, Mizdown, Goldust, and Stardust beat the Usos and the Matadors.