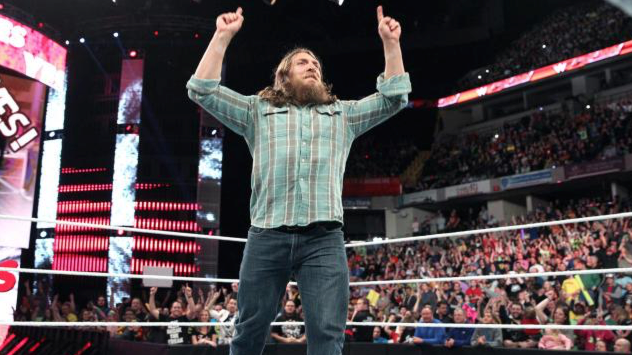 And no, there was no real Sting fallout outside of Stephanie McMahon blaming the Authority loss on him.

It was a nice surprise to see Daniel Bryan as the surprise guest General Manager on Raw. I didn’t even mind the predictable segment where he brought out the losing team and gave them dumb things to do (Kane had to sell snacks, Rusev had to do the pledge of allegiance, Mark Henry had to face THE RYBACK as Bryan called him, Luke Harper had to face Dean Ambrose, and Seth Rollins had to tag with Joey Mercury and Jamie Noble against John Cena and Dolph Ziggler). Before that he did the Yes! gimmick in front of Triple H and Stephanie who had to leave in the limo with Vince McMahon. Vince told them that he wasn’t angry as he never uses that word, but he’s simply disappointed.

Bryan also came out at the end of the show after Cena and Ziggler won the handicap match. Rollins abandoned his teammates, but Bryan came out to toss him back in the ring and celebrate with the winners.

Big Show came out to say that he panicked and made a mistake. He’s not a bad guy and really, when it came down to it, he saw that the other team had the advantage and made the wrong decision. I’m not quite sure why he made that decision though. He tried to cry, which he’s not terrible at, but it was a comedy thing at this point. He then challenged anyone in the back to talk trash about him in front of his face and ROWAN came out to say that he didn’t like bullies and booted Show.

So there’s your next feud. I’m just thankful it’s not with John Cena, though, there wasn’t even any follow-up to that. I guess Cena truly didn’t care since he wasn’t going to get fired anyway. Dick.

The Anonymous Raw General Manager is also back.

At the end of the show, there was a podium set up with a computer. The iPhone text tone was back and Michael Cole read the email with a really weird grin on his face. It sounds like that will be the gimmick for next week.

– Dean Ambrose beat Luke Harper by disqualification after Bray Wyatt blindsided Ambrose. I liked this better than last night’s angle. Wyatt gave him the Sister Abigail on the floor and then threw the announcer chairs on him much like Ambrose threw the metal chairs on him last night.

– Larry The Cable Guy and Santino were the guest hosts and did two comedy segments. The first was about a five minute joke segment in which one of the jokes was actually funny, but thankfully Goldust and Stardust came out to save them. The second segment was with Kane who was selling snacks. He poured mustard on Santino and told Larry he was a fan of his.

– The Miz and Damien Mizdow beat Goldust and Stardust to keep their tag straps.

– Fandango beat Justin Gabriel which is a rematch from the preshow last night.

– Brie Bella beat AJ Lee after interference from sister Nikki. Lee was a poor sport and said that talent wasn’t sexually transmitted, whatever that meant.

– Tyson Kidd and Natalya beat Adam Rose and The Bunny when said Bunny “accidentally” tripped Rose when he meant to trip Kidd.

There was a great opportunity to get some momentum going after a big finish to the Survivor Series and they flat out failed. While there was some fun stuff, mostly having to do with seeing Daniel Bryan on TV again (and the fans react to him), it was yet again, otherwise a boring and frustrating show.