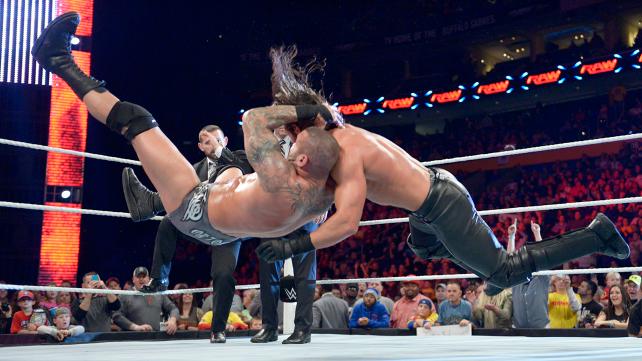 The stakes were raised for Survivor Series.

The show long storyline teased dissension in the Authority. It started with Vince McMahon coming out with Triple H and Stephanie McMahon. Vince looked old and it was even more jarring since we’ve seen so much Attitude footage on the WWE Network lately.

For some reason, Vince wanted to raise the stakes at Survivor Series and said that if Team Authority didn’t beat Team Cena at the show, they’d lose their power. Why did he come up with this stipulation? He didn’t say. Is he pro-Authority or against the Authority? Is he in charge of things again? I was confused, but hey, I got to see Vinnie Mac back on TV.

Stephanie and Triple H discussed putting the strongest team together for the match. Triple H wanted to make sure Randy Orton was on the team, but Stephanie wondered if that was the best idea.

Dolph Ziggler came out and the full Authority sans Randy Orton followed him. Why is everyone afraid of Dolph Ziggler? Stephanie said that Team Authority was Seth Rollins, Kane, and Randy Orton. Triple H said that he’d give him anything he wanted if he didn’t join Team Cena. Dolph said what he actually wanted was for the Authority to be out of power and then he had to face Seth Rollins.

Rollins won by disqualification after a run-in by Randy Orton. Orton RKO’d Rollins and cleared the ring. After the break, Orton went on his crazy speed yelling rant and asked for a match with Rollins. Triple H gave him one as long as he’d co-Lead Team Authority at Survivor Series.

Triple H and Stephanie wondered about Mark Henry and Rusev for possible spots on their team. Steph talked to Rusev and Lana after their match against Zack Ryder.

Hey @JohnCena…are you still looking for partners for your team at #SurvivorSeries? Don't forget about me bro. I'm always ready! #WWWYKI

Finally, the main event happened. Seth Rollins outsmarted Randy Orton by reversing an RKO into a backslide. He told Randy that it was over and apologized. Orton apologized too before giving Rollins an RKO and then went buck wild. He beat up Jamie Noble and Joey Mercury. He threw Kane out of the ring. He was about to punt Rollins when Triple H came out. Then he punched Triple H too.

But it was soon too much. Rollins curb stomped him on the announcer’s table. Triple H, at the behest of Stephanie, gave Kane and Rollins the approval to finish Orton, which meant another curb stomp on the steps.

It was a powerful angle, but after a long Raw, it was probably less effective than it should’ve been. And it went forever.

Thankfully, Orton was still able to RKO a skier.

Mark Henry is back where he needs to be in being a heel. His feud with Big Show has an interesting dynamic, but it’s hard to buy Show as a sympathetic babyface. After Show kicked out of the World’s Strongest Slam, Henry got angry and used the ring steps to beat him.

Show also wanted on Team Cena. I will give them credit for making the Survivor Series angle the most important thing on the show. Either the big players want on the teams or the teams want the big players.

The WWE Network exclusive was…

After nearly 3 1/2 hours of Raw, we got a network exclusive. Teased all day and on the show, after Raw went off air, the WWE Network showed a match between Sheamus and Rusev for the US title.

Rusev is now the US champ and is going to take the belt to Putin.

– Mean Dean Ambrose beat Cesaro. Bray Wyatt was at ringside until Ambrose went after him and he disappeared. Cesaro was busted open during the match and they had to try and close the cut during the commercial.

– Before Sheamus’ big match after Raw ended, he lost to Tyson Kidd by count out after Kidd tossed Natalya in front of him while he beat the count.

– Ryback beat Titus in a battle of the big men.

– There was a Luke Harper promo and a creepy Rowan sighting playing with Rene Young’s hair.

– Emma lost to Nikki Bella. Nikki made Brie slap AJ who was sitting ring side. AJ tossed Brie to the floor and chased Nikki who got out of dodge.

– The Matadors beat the tag champs in Goldust and Stardust in a non-title match. Miz and Mizdow were ringside. The champs will face the Usos in a steel cage match on Smackdown.

The Randy Orton heel turn was well done, but even after writing all that happened, it was exhausting just to get there.