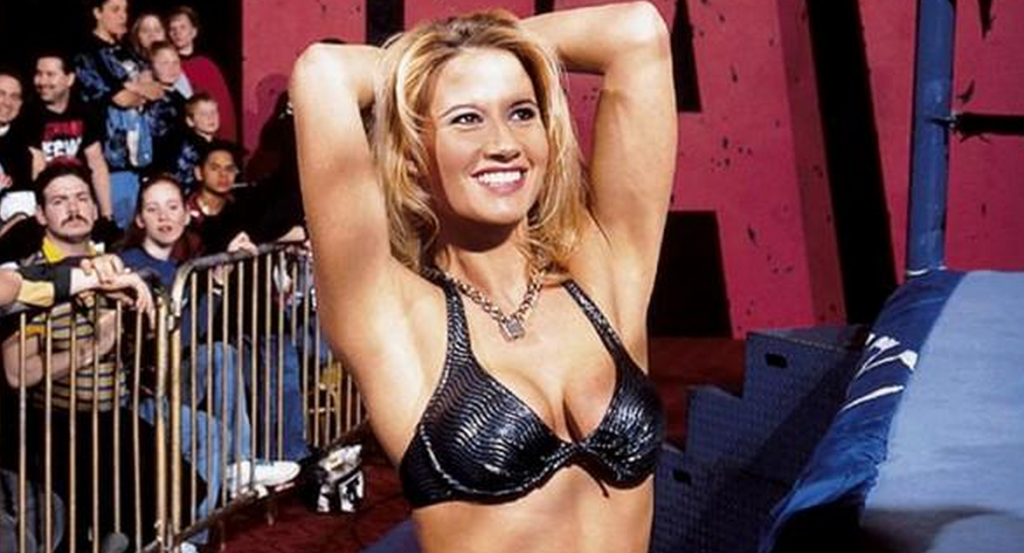 WWE focuses on the Divas in the latest episode of the Monday Night War.

When I first learned that there would an episode of The Monday Night War on the Divas, I quickly surmised that it would end up being the Sunny/Sable/Trish/Lita show, mainly because they were the four most recognizable women during the Attitude Era. Surprisingly, that wasn’t the case at all.

The early portion of the episode focuses on Elizabeth from the 80s and Alundra Blayze from the 90s as the key female performers in the company. But the women were vastly different. Elizabeth was the first truly glamorous manager and really the first true valet of her kind. Alundra brought back athleticism to women’s wrestling, the kind that we hadn’t seen since Wendi Richter (no mention of her or Cyndi Lauper either, despite their contributions). This of course would lead to Alundra (Madusa) defecting to WCW in 1995 and throwing the WWF Women’s Title in the trash. Of course, Madusa didn’t do diddly squat in WCW.

WWF’s response was to find charismatic and sexy females, which as I thought, would lead to the Sunny segment. The episode describes her as being the “original diva.” While I can understand that comparison and respect it, the reason why Sunny was head and shoulders above the majority of divas in the modern era is because she was more than just a body. She had loads of charisma AND she was a manager who was trained by a real manager, Jim Cornette. The same goes for Marlena/Terri/Alexandra York. These ladies were a jack of many trades.

For some reason, the episode focuses several minutes on the NWO yet again with NO mention of women. Is this just padding?

To our friend Jason Hagholm’s delight, Chyna gets her own segment and is shown the proper respect she deserves despite all of the real-life backstage controversy. The show did a good job of focusing on how different and unique Chyna was when compared to Sunny and the other glamorous divas, but they really didn’t dig deep into any Chyna storylines such as her fun interactions with Kane, Eddie, and Mark Henry. In fact, Chyna was the first female in wrestling history to win the WWF Intercontinental Title and to compete in a Royal Rumble. Unfortunately for our friend Jason, Nicole Bass was completely ignored.

Other than Elizabeth and Madusa, WCW’s use of women had pretty much been focused entirely on the Nitro Girls. The creation of the Nitro Girls was a brilliant idea and a perfect way to transition between television segments and allow the commentary team to make announcements and digest the angles, but like Cody Rhodes says on here, after a while, they became filler.

One of the things that somewhat bugged me about this episode was that they talk about how WCW never properly booked women in the same vein as WWF – controversial and overtly sexual. This bugged me because Bischoff himself said he chose not to go in the Howard Stern direction, and because Turner Networks wouldn’t have let them go as far as USA would allow WWF. Near the end however, Stacy Keibler and Torrie Wilson would follow in a similar sexy and controversial direction.

The sex appeal of Sunny, Sable, and Terri in the early Attitude Era absolutely helped gain an audience… even if it was a perverted and somewhat immature way to do so. However, they drew ratings and that’s a fact. Sable was an incredible ratings draw and that’s probably why she got so much time in this episode. Once Playboy Magazine started to feature WWE Divas annually, it brought more eyeballs to the product.

The episode then turned its focus to the introduction of Lita and Trish Stratus. Bottom line – Lita was over with the audience. Lita was extremely popular with both men and women in 2000 and had some memorable storylines. Trish, GG’s favorite, was the headliner. She’s shown here as the perfect package. She had an amazing body, charisma, learned how to work, and genuinely loved the business. She was one of a kind. Since this is WWE, Stephanie McMahon gets last billing. Of course she does.

To summarize the history, in 1998 (after the belt was dormant for 3 years), the WWF brought back the WWF/WWE Women’s championship. With the company bringing in Jacqueline and Ivory, two very accomplished and skilled female workers, there was a newfound focus on women’s wrestling. When WCW died, Fit Finlay was brought in specifically to train the women, which would lead to an evolution of athletic workers like Trish, Lita, and Victoria as the leaders of the women’s division in 2003. The 2000-2004 time frame was the best era for women’s wrestling.

This was a pretty decent episode. There were some things I would change and I do wish they went more in depth on some things. No new ground was broken and things were spread out too much for any singular talent to get a focus.