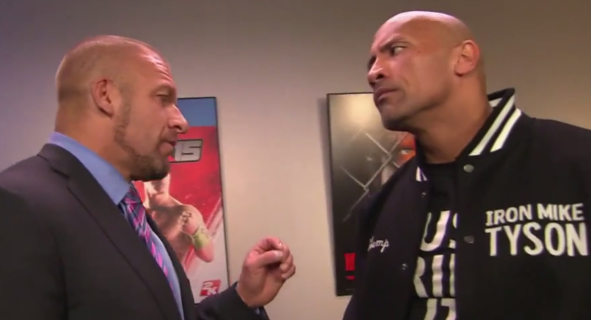 Rock and Triple H take a stroll on memory lane.

The Rock and Triple H taped a video segment for Smackdown 15, which may or may not have WrestleMania 31 repercussions, which we discussed here on this website based on the Smackdown spoilers.

When you see the video, the segment seems much more like it was done for laughs than done to build up a major main event. The comedy is done in a way that makes it seem like a one-off joke, unless there was time to build something and this is the first tease.

However, unless Rock is going to be on WWE TV more often, I’m not quite sure that I’d expect them to turn this into a match for WrestleMania 31. They did say that it could be for any WrestleMania and Triple H said that they would main event in front of 100,000 people, which isn’t a reality for this year’s WrestleMania just based on stadium size. It would be a reality for WrestleMania 32, which is to be held at AT&T Stadium, formerly known as Cowboys Stadium.

You can watch the video in its entirety and make your own conclusions.