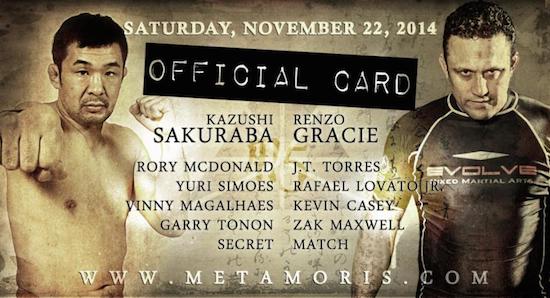 Metamoris has released a trailer for their 5th event that will take place November 22nd.

The big main event they announced is a grappling battle between Renzo Gracie and Kazushi Sakuraba. These two men had a fight in 2000 for Pride that helped develop Sakuraba as a legend in Mixed Martial Arts when he broke Renzo’s arm.

This match is being used as a device to draw in fans who remember the legendary mixed martial arts fight. Metamoris, as shown by its previous shows, does a good job of signing an interesting main event that will draw in non-fans of grappling with some interesting match-ups on the under card that will make hardcore fans of grappling salivate. Metamoris also does a great job of introducing each of the match-ups with short form 24/7 UFC countdown style feature.

As each of the features gets posted to the official Metamoris YouTube page, I will give my thoughts on the match-ups. Each of the match-ups will be contested on a single white mat with UFC veteran-turned commentator Kenny Florian and Jiu Jitsu Black Belt Jeff Glover providing the commentary. The match-ups are 20 minutes to a single submission. This style of matchup is even unique to what you would see at the biggest grappling tournaments.

Below is the card as it currently stands.