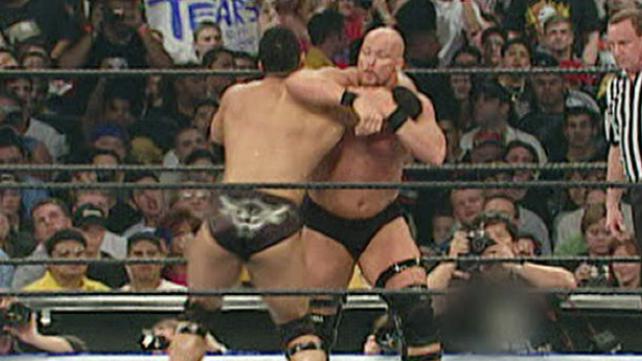 Stone Cold Steve Austin hosted a much different podcast than usual on his most recent Unleashed show.

Austin had been talking about calling his match with the Rock on his podcast to give the fans insight into what was going on during the match. He tried once and didn’t like how it turned out so he went into the studio to record it.

The podcast isn’t much without watching the match. You can hear the audio of the match and his insights, but unless you know that match upward and backward, it’s not a great listen. However, if you have the match up and can sync it with Austin’s audio, it’s quite the treat for hardcore wrestling fans.

You can listen to the podcast here:

To sync with the video I’ll add for you below, you’ll want to start the podcast at 25:07. Austin has a long intro before he gets to the match, which you can listen to as well.

Here’s the video that you can sync up with:

You’ll want to start that specific video at :08. You’ll want to have two tabs open, so you can open a new tab and watch the video of the match on YouTube.

If you’d like to watch via the WWE Network, click this link. Sync the video at 3:05:30 on the Network.

There are some issues with the video Austin’s watching. It freezes up a couple times and will throw the sync off. So you’ll have to pause your own video a couple times. You’ll know when this happens because you won’t hear Jim Ross or Paul Heyman at all. I think the audio freezes on his end.

But there are some fun tidbits to learn from Austin. He mentions that the match was no disqualification, yet he and Rock both broke on the five count when it wasn’t necessary. He mentioned that Rock could’ve laid in some elbows better and makes fun of his own attempt at the Sharpshooter.

The most interesting ones are when he talks about Earl Hebner’s role in the match and how he and Rock used communication throughout the match even though you don’t hear any spots called. He also mentions some of the vices wrestlers use today which makes the matches look more fake than ever in comparison to this one.

You’ll also notice how JR accentuates the match at every point. It will make you more mad that he’s not calling matches today.