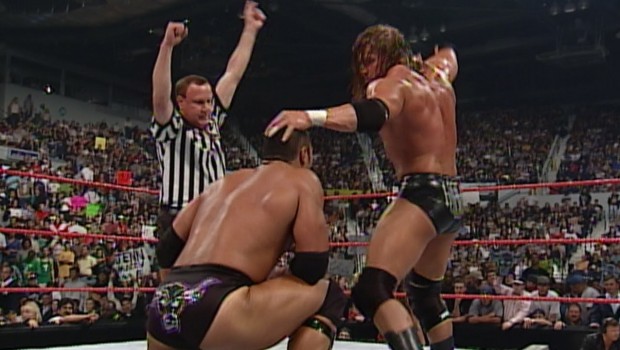 The Rock and Triple H worked together in a backstage segment set to air Friday on the 15th Anniversary of Smackdown.

Those who were there said both men were reminiscing about the first ever episode of Smackdown, main evented by both of them in which Shawn Michaels superkicked the Rock to help Triple H win.

Rock wondered who would win if they both main evented WrestleMania one more time.

Really, the WrestleMania 2000 main event should’ve been simply Triple H vs The Rock as that was the biggest feud of the entire year in one of WWE’s most successful years ever.

Triple H seemed to be rubbing it in that he mostly got over on Rock when they wrestled. Would’ve been great if Rock brought up that he was the one who actually got over in their Ladder Match at SummerSlam 1998, even though Triple H won the fake match.

While it seemed like Rock wasn’t interested in wrestling at WrestleMania 31 based on his interviews earlier this year, this may have legs. His original statement was that in order for him to put the tights back on, it’d have to be for something big or record breaking. WrestleMania 31 won’t be necessarily record breaking, but the Rock has ties to the Bay Area and he could pull double duty if they also wanted to put him in the Hall of Fame on the night before WrestleMania. It’d be the first time someone was the main attraction at the Hall of Fame and then the main attraction at WrestleMania in the same year.

There are hurdles if Rock is interested in wrestling, being that Fast & Furious 7, which should do some pretty gigantic numbers, comes out the following weekend. Theoretically, Rock would be doing press a couple weeks before the release, which might make it hard to do the big show.

WWE has to be concerned at least the slight bit that their proposed main event between Brock Lesnar and Roman Reigns doesn’t have much steam behind it though we’re still five months away and Reigns is off television because of an injury. Triple H and Rock would probably best in a supporting role if the idea is for Reigns to be the champ. But, if Rock is involved, his match is going to be the main event in most eyes no matter what.

In interesting booking, Dave Meltzer wrote in the latest edition of the Wrestling Observer, that Brock Lesnar may not be back until Royal Rumble, and would probably be facing Cena again.

If true, they will have three PPV shows without the title, effectively icing it.