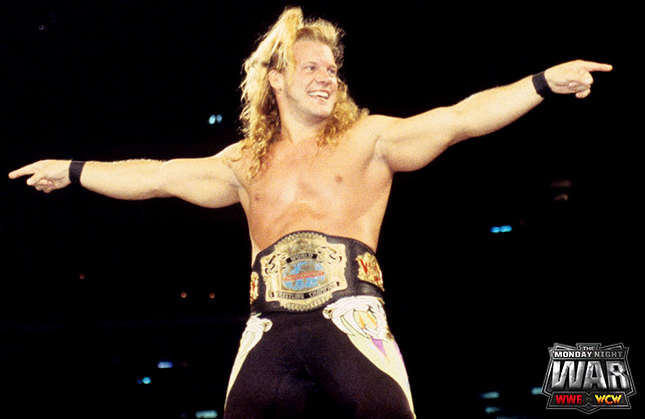 The WWE Network gives the shine to Chris Jericho in the latest episode of the Monday Night War.

Jericho as the subject of an entire episode is intriguing for a couple of reasons. Firstly, he was focused on some during the episode on the Cruiserweights. Secondly, Jericho wasn’t a big player for WCW and by the time he reached WWE, WWE had already taken control of the Monday Night War.

But there’s a pretty good reason for him to get his own episode. Because he was stuck in mid-card hell in WCW, his success in WWE showed the wrestling world just how screwed up WCW was. How could they miss on Jericho so badly? In essence, he was the poster child for how badly WCW was killing off the future of their company.

Also, his success helped provide a gateway for other WCW wrestlers who were in the same boat like Eddie Guerrero.

It’s also good timing for a Jericho episode considering that his third book recently came out and he’s been doing a lot of interviews about it.

If you’ve read Jericho’s books, you know much of his story. But for those who haven’t, this episode is rock solid because it utilizes a lot of Jericho’s interviews to tell the story.

This episode did seem fresher than most and it’s because while Jericho fans know his story, WWE doesn’t hit its viewers over the head with Jericho’s story like they do with other story arcs.

If you were to summarize the episode, the narrative is that Jericho was a very talented performer who was overlooked in WCW because of the powers that be and what they considered to be a star, but his sole goal was to be in WWE and everything else was just a stepping stone.

He worked overseas in Japan and also in Mexico. It was cool to see Alberto Del Rio talk about him in Mexico.

Paul Heyman gets credit for bringing him to the United States to work for ECW. Jericho admits he barely had over 20 matches for the company. There wasn’t any talk of his training and it would’ve been nice to see Lance Storm say something about him.

Heyman says that when he went to the World Wrestling Peace festival, he knew Jericho would be soon gone because Eric Bischoff was there.

His WCW run was discussed as an ultimate failure because of how little Bischoff and the guys in control thought of him, which was mostly based on size and who he was friends with. He thought he was just a body as a babyface, but turning heel, he was able to create a character. There was freedom for him to do what he wanted on the mic as all Bischoff cared about was that it was short. But it allowed him to figure out how to get over.

He said that since he always saw himself as a WWE guy, he was actually rooting for WWE in the ratings during the war. That was kind of an odd statement.

They went into overdrive on the Goldberg/Jericho angle that actually went nowhere. Much like the entire Goldberg episode, this part of the episode seemed to be more about showing Goldberg as a goof than anything else. Jericho said that Bischoff, Kevin Nash, and Hulk Hogan all didn’t really want him working with Goldberg, but because no one really formatted the show, he kept running with calling out Goldberg.

Goldberg said that he didn’t really think the audience would see the feud as anything serious because of the size difference. But it was also because Jericho was all comedy and Goldberg’s character was so serious. Bischoff said he didn’t see Jericho as a main eventer and without Goldberg or Bischoff signed on, he was overly frustrated and wanted out.

The infamous meeting with Vince McMahon was brought up and discussed. Jericho said he was still under contract to WCW but WWE paid for him to fly out to Vince’s house under the name of Stevenson. He met with Vince and the writing crew who was booking Raw and he said that Vince made sure to not say anything that would be a contract breach.

He told Bischoff that he wanted out and Bischoff said it’s not like they threw a ton of money at him to get him to stay. Jericho said Bischoff took him off TV, but made him work house shows and paid him his full contract.

Jericho’s WWE debut is well-remembered and still puts a smile on my face. Jericho recalls seeing a Y2K countdown clock and thinking it would be a cool way to introduce a character and then remembered he was debuting soon and called Vince Russo to tell him.

He was literally a bigger star on his WWE debut than he was in his entire WCW existence. Jericho talked about how WWE guys saw him as WCW and didn’t welcome him with open arms. He said it was hard adapting to the WWE style and it took not being booked for the September PPV which was only a month or so after his debut, where it hit him that he needed to work harder and fight back.

The end of the episode showed him beating the Rock and Stone Cold Steve Austin to become the first Undisputed WWE champion. It didn’t really have anything to do with the Monday Night War as it was already over, but it was a nice capper to the episode.

Was Jericho really a big part of the actual Monday Night War? No. By the time he made a difference, the war was effectively over. But he was shining example of why WWE was able to overtake WCW.