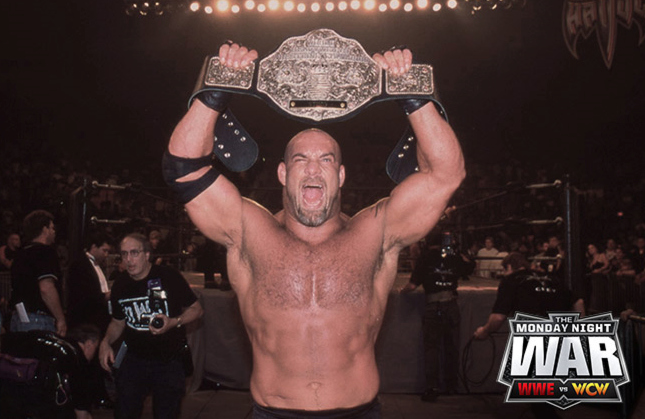 On the latest episode of the Monday Night War, WWE focuses on “the man” Bill Goldberg.

Bill didn’t have the common man’s relatability that Steve Austin had, or the over the top charisma of Rock, or the lovability of Mick Foley. He was just a bad ass. And no matter what anybody tells you, not JUST in pro wrestling, but in ALL forms of entertainment and storytelling, bad ass monsters who beat people ALWAYS get over. In addition, he did possess a natural charisma and intensity which put him ahead of other tough guys of the era like Wrath and Fit Finlay.

A lot of the snippets on this episode were taken from the Goldberg DVD, including interviews from Goldberg himself. They pretty much ran through Goldberg’s entry into professional wrestling and his time at the Power Plant, learning how to work from scratch. At the time, in the Wrestling Observer, Dave Meltzer said the plan at the time was that his name was going to be Bill Gold. Bad idea and thankfully that was changed. The episode shows Goldberg’s debut in September of 1997 against Hugh Morris.

The clips of Goldberg playing football, with a RIDICULOUS perm, were enjoyable.

(One of Bill’s greatest TV opponents ever was Jerry Flynn, a man he had about five matches with and each one built on the last. Jerry Flynn however, is undefeated against Goldberg when it comes to awesome perms.)

But of course, this is WWE’s revisionist history and since Bill Goldberg was never one of Hun-Tor’s boys, he didn’t get the full credit he deserved. Kevin Nash, a man who once spent fifteen minutes of a PPV main event lying on the ground huffing and puffing, has the audacity to say Goldberg couldn’t produce a 25-minute main event on PPV. I mean… the hypocrisy (and irony) of this is absurd.

The episode covers a match with William Regal which many Internet wrestling fans thought was Regal shooting on him to make him look badly. There’s always been two sides of the story. Regal (who IS one of Hunter’s boys), claims he was just told to have a competitive match and Goldberg froze. Goldberg has always maintained that Regal went into business for himself and wouldn’t cooperate. Why are these marks like Brodus Clay and Daniel Bryan telling us that Goldberg wasn’t a mat technician? Way to go out on a limb with that one.

But guess what, it doesn’t matter in wrestling. Pro wrestling is a business to make money. Hulk Hogan was one of the simplest workers ever and drew more money than anybody. Goldberg, as limited as he was, connected with the fans. That’s ALL that matters! Goldberg drew money. Did you know that because of Goldberg’s overness, WCW ran THREE consecutive stadium shows in late 98/early 99? Did you know that after Goldberg finally beat Hulk Hogan in the Georgia Dome in 1998, Nitro defeated Raw in the ratings for four consecutive weeks, in the midst of a super huge Austin/Undertaker SummerSlam build?

The problem is that these geeks like Damian Sandow claiming all Goldberg had was a Spear and Jackhammer are wrong. No folks, those were his finishers. His finishing moves. You know… like the Rock Bottom and People’s Elbow? Goldberg used a power slam. Goldberg used a superkick. Goldberg had an ankle lock. Goldberg had a press slam. Just like Mike Tyson, people paid to see Goldberg kill guys. Point blank! Nobody expected Goldberg to work 45 minute masterpieces like Dynamite Kid!

No matter what phony WWE history will tell you, Goldberg was a legitimate money-drawing ratings-drawing star, even though it was for a short time. Was he on the level of Steve Austin in 1998? Probably not, but was he close? Unarguable. He was closer than Nash. He was closer than Hogan. He was closer than even Rock for the short time. There’s information out there to prove this. But of course, WWE’s ratings tally skips around and doesn’t show these facts. Nice! Now its blatant revisionism!

The episode focuses on Goldberg’s coronation as World Champion in the Georgia Dome. Immediately, it was Hulk Hogan’s idea. Oh, it was… but what these carnies don’t tell you is that Hogan only agreed to drop the World Title to Goldberg if Hogan could get his win back AND the streak AND the title by the end of the year. It truly was a great moment for WCW, but within seven months it meant absolutely nothing. Hogan says it was a bad call. A month later, Hogan sold convincingly to Jay Leno. Yeah… bad call.

The Gillberg parody was talked about. It was nothing more than just a parody because they were in a ratings war.

Nash, the booker at the time, took the streak and the World Title at Starrcade 1998. I could legitimately write about a twenty-five page essay on how stupid this decision and the follow-up was and it legit stands right up there with the botching of Sting, the Russo era, and the Bischoff spending spree as the top reasons why WCW does not exist anymore. Goldberg gets over and egos and small penises (or is it penii) get in the way of it and it kills the chance of it ever making long-term money.

CM Punk is one of the few great interview subjects on this episode since he understands how it works. He says “In this business, when something gets hot, you run with it, you don’t zap it with a taser.” IRONY! Go back and watch Punk take a powerbomb FROM KEVIN NASH HIMSELF at Summerslam 2011 SMACK DAB in the middle of him being the hottest wrestler on earth. Oh, and a month after, yep, Punk takes a pedigree and gets pinned 1-2-3.

But still, Goldberg still had a chance. Yes, even AFTER the fabled finger-poke of doom! Goldberg could’ve been salvaged. Goldberg could’ve had an awesome chase to regain his belt. Goldberg could’ve gotten revenge and WCW may have survived. But no, he was soon saddled in a mini-feud with Bam Bam Bigelow, finally got his revenge on Nash THREE MONTHS LATER, and then was put into a feud with the incredibly cold Steiner Brothers. Meanwhile, Hogan goes babyface again and feuds with Nash over the summer. Hogan and Nash on top; Goldberg in the midcard.

Nash says on here they wanted to reunite the NWO so that Goldberg could beat Hogan again in nine months. First of all, NINE MONTHS!? IN THE MIDDLE OF A WAR!? You wanted to make Goldberg look like a goober for NINE MONTHS while Austin and Rock were on the other channel drawing 6s in the ratings? Does anybody really believe another nine months of NWO beatdowns would’ve helped WCW in any way in 1999. I love Nash as a character, but I’ve never wanted to strangle him more. By the time late 1999 and 2000 rolled around, Goldberg was yesterday’s news, and it’s all WCW’s fault. There was no talk of Goldberg’s heel turn in 2000 (one of the worst ever in wrestling) or his wasted WWE run in 2003.

The fact is, Goldberg was NOT a wrestling fan and he definitely had an ego. Though, from a business perspective, he drew money for a short time and was hot AND memorable, much like the Ultimate Warrior. The difference is, Goldberg’s drawing power continued after he became World Champion and Warrior’s did not… but both have something in common; Hulk Hogan’s puppy dog sad face.

As far as interviews, Kevin Sullivan was awesome on here. Paul Heyman is good. Eric Bischoff’s stuff from 2003 was okay. Jimmy Hart was okay. SID EUDY IS HERE! Randy Orton was very cool too. Surprisingly, Jack Swagger was pretty cool. Everybody else was a company man. If you watch this episode, please be aware of WWE’s biases and Hunter’s small-man complex before swallowing the nonsense. This is the most infuriating edition of this series to date.