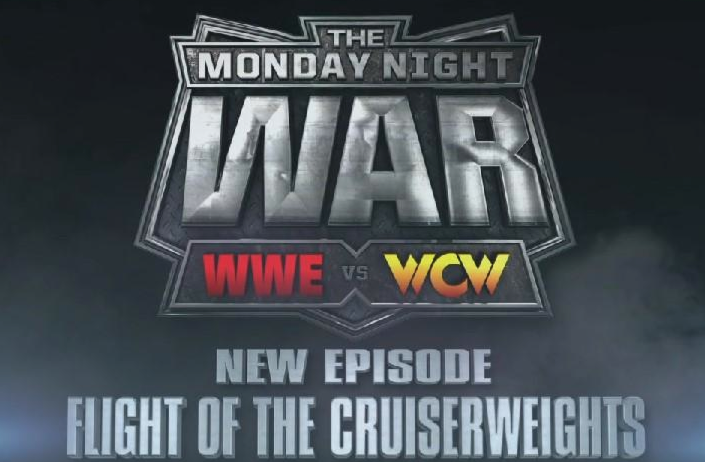 It’s time to talk about some cruiserweights.

The Monday Night War documentary series, up until this point, has been unfairly one-sided, with a focus mostly on the WWF’s side. Although I expected a story on Sting or Bill Goldberg first, I was very pleasantly surprised to hear that this week’s episode titled Flight of the Cruiserweights was next. I thought for a long time that this would be one of the factors that would be ignored during this series, especially since the lighter-weight guys have never been taken seriously in WWF/E even to this day.

Early on in the episode, they talk about the differences between the realistic fighting Japanese style and Mexican fast-paced lucha libre styles of pro wrestling, showing an equal respect to both. I LOVE the fact that rather than show clips of The Miz and John Cena and these goofballs, we get lots of interview clips from guys like Daniel Bryan and Cesaro, two guys who are not only fans of the international style, but worked that very hybrid style for the majority of their young careers. Also, NORMAN SMILEY! Eddie Guerrero and Dean Malenko are the focus of the brunt of these highlight clips.

Anybody who has studied the history of the professional wrestling business understands that territories always thrive when you have fresh, young, hungry talent up and down your roster, especially in the mid-card. The influx of these international talents created a very diverse program on Monday Nitro. Big Show says on here “variety is key” and he’s right. WCW provided you the superstars on top like Hulk Hogan, Lex Luger, and Ric Flair, and then on the undercard you had hard workers putting on great matches. These guys didn’t need gimmicks to get over and were able to “steal the show” purely based on their talent and work. In addition to that, these new exciting wrestlers took over the WCW syndicated B-shows and Daniel Bryan points out that he used to love watching the B-shows because for a long time that was the place to see them apply their craft (primarily when Nitro was one hour and featured mostly the big guys).

The focus shifted to the 1996 Great American Bash, one of the greatest PPVs in the history of WCW, the night that a man named Rey Mysterio Jr. made his televised WCW debut wrestling Dean Malenko and stole the show. This was Daniel Bryan’s favorite match in 1996 as well as mine. After this night, cruiserweights got a crapload of TV time, and several new talents came aboard such as Ultimo Dragon, Chris Jericho, Psicosis, Super Calo, Lizmark, and La Parka. I still don’t believe some people really understand just how deep and immense WCW’s talent pool was. Not only were these guys talented workers, but these were LEGITIMATE superstars. La Parka and El Dandy, although boxed in as just “cruiserweights” in WCW, are two of the biggest superstars in Mexican wrestling history. Konnan was on Mexican soap operas. Look what happened to the careers of Chris Jericho, Yugi Nagata, etc? WCW had EVERYBODY!

(You can listen to Brandon Draven and me discuss this show in full detail on our podcast, The Kayfabulous Lucha Bros Wrestling Show.)

The episode strangely fast forwards to Halloween Havoc 1997, and focuses on the Mysterio vs. Guerrero 5 star classic (that backflip DDT still blows my mind to this day). These guys tried so hard in 2005 to top it but sadly never could.

Next, the spotlight is given to WWF’s 1997 Light Heavyweight Division led by Taka Michinoku and Great Sasuke having amazing matches of their own, but like Chris Jericho said, they had good talent, but not ENOUGH talent to support a division. A lot of indy guys would make one-shot appearances during this time. Scott Putski, who was absolutely a wellness failure waiting to happen, was billed as a “light heavyweight.”

The WWF NEVER properly booked smaller guys because the people on top in the office never took the lighter guys seriously. Vince McMahon loved the big bodies and Vince Russo has notoriously gone on record as saying that he never cared for international, non-English speaking wrestlers when he had Rock and Mick to give the mic too. Yes Rock and Mick are special, but you need variety. Plus those comments seem slightly prejudiced. Bottom line, the division was never taken seriously and flopped.

Naturally, the WCW cruiserweight guys were younger, faster, and hungrier and as a result, this led to some jealousy amongst some of the top guys who had huge egos and a fear of losing their spots. This is when the politics kicked in. This is when you saw Chris Jericho get laid out by the NWO on a weekly basis. This is when Nash and Hall buried Rey and unmasked him. The unmasking of Rey at Superbrawl IX (which you can hear about in detail) was one of the more disrespectful angles of the time and I find it interesting that we see bits and pieces of the feud on here, but never actually see the unmasking. WWE has tried to pretend that’s never happened. Rather than throw some of these guys a bone and try to get them over, WCW kept focusing on the same top guys over and over.

They gave a short segment to Eddie’s “shoot” promo on Nitro when he “quit.” His widow Vickie Guerrero and Booker T talk about how Eddie was legitimately frustrated, but understand that if it makes it on TV, 99.999% of the time it’s not a shoot and this wasn’t. Yes I’m sure Eddie was legit angry, but this was really just an edgy storyline to kick off the LWO, which was dropped in January of 1999 when Eddie had his car accident. It WAS based on reality because allegedly, Bischoff DID throw coffee on Eddie in the back one time. Naturally as a teenage latino, I was very enthralled and excited for the LWO, but it went nowhere.

I just marked out for Bret Hart’s El Dandy promo.

This all led to the departure of talent, which was really a huge blow for WCW, specially in the eyes of the increasing internet/newsletter community who enjoyed their hard working efforts. Now, with Chris Jericho, Dean Malenko, and a horde of these talents defecting “up north” (circa 1999-2002), you now had a WWF product that had both compelling storylines written by the late Chris Kreski and fresh match-ups with the same great wrestlers you saw on Turner’s TV literally weeks prior. The night the Radicalz jumped ship to WWF was one of the biggest shockers of the war, and also the only time on this episode when Chris Benoit is mentioned by name.

The show closes with a look at how WWF took the WCW mid-carders and made them stars and picked up the ball when WCW dropped it. Like it or not, Chris Benoit, Chris Jericho, Rey Mysterio, and Eddie Guerrero all became World Champions, a move that Eric Bischoff would’ve never dreamed of doing. You could argue until you are blue in the face about what really killed WCW, whether it was Vince Russo, Hulk Hogan, Kevin Nash, Bischoff, or even Jamie Kellner. But the fact remains that those hard working guys leaving WCW dealt a major blow.

They end the episode by implying that if it wasn’t for these guys paving the way, Daniel Bryan and CM Punk would’ve never gotten their shot at being top guys. So far, this has been my absolute favorite episode of the Monday Night War series and there’s a lot of things that really make it stand out and I really have to give whomever laid this out lots of props. This one is a big thumbs up!